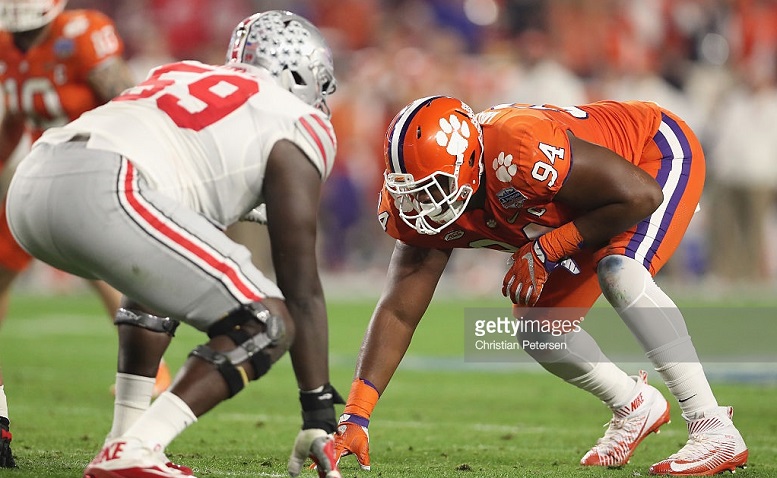 – Moves quickly side to side.
– Good first punch, then fully extended arms to gain leverage against blockers.
– Plays 3-tech and 5-tech.
– Likes to stunt and twist his way around blockers.
– Knows when he is beat on pass rush and gets his big mitts up to try to knock down the pigskin.
– Athletic enough to drop back into zone coverage.

– Plays too high which allows blockers to get under his pads and control him or force him back.
– Not well conditioned, cannot play more than 60% of snaps.
– Motor runs hot and cold.
– Doesn’t have established pass rushing techniques (attempts to spin and bull rush).
– Tries to maul with his upper body, but loses leverage with his trunk either too far in front or too far behind after a step or two.

– Two year starter for the Tigers.
– 247Sports rated him the 55th best player and the seventh best defensive linemen in his incoming class.
– Only played three games in 2013 due to a car accident on a rainy night where Watkins was a passenger and lost a friend. He got redshirted for the 2013 season.
– Named All-ACC final two seasons.
– Finished with 79 career solo tackles, 72 assists, 21 tackles for loss, 11 sacks, and one 15 yard interception return for a touchdown.

The Tiger defender gets off the line quickly, battles the guard back towards the pocket, then disengages from the offensive lineman. He tracks down the quarterback, but misses him with a poor off-balanced attempt at an arm tackle. Watkins keeps on pursuing him until the signal caller is on the ground.

Watkins fires out low, but lets the guard smash him towards the ground. The center and guard toss him like a cabor, which causes the defender to fall back. His shattered body on the ground forces a pile, but does not prevent a first down.

The Clemson defensive tackle anchors off the snap, slips the guard, and locates the ball carrier. He meets said back in the hole and stands him up with another defender, keeping him from crossing the line of scrimmage.

The defender lines up in 5-tech, fires across the line of scrimmage, and splits the double teaming guard and tackle. Watkins gets his arms up to disrupt the pocket, over pursues JT Barrett, and flushes the quarterback out for a ten yard run.

Watkins crosses the offensive tackles face into the C-gap, while his defensive end dips inside towards the B-gap. This stunt disrupts the Ohio State blocking scheme. The defender uses his upper body strength to battle and tire out the tackle while spying on the quarterback. #94 steps up towards Barrett and chases him down the line for a sack!

The athletic Clemson defender is exciting to watch, but gets way too high out of his stance against centers and guards. He looked a little better against offensive tackles because his propensity to battle with his upper body is easier to hide against the taller blockers. Watkins gets put on skates a little too much to count on for anchoring 5-tech purposes. I think he is too hot and cold of a player for the Steelers to invest in.