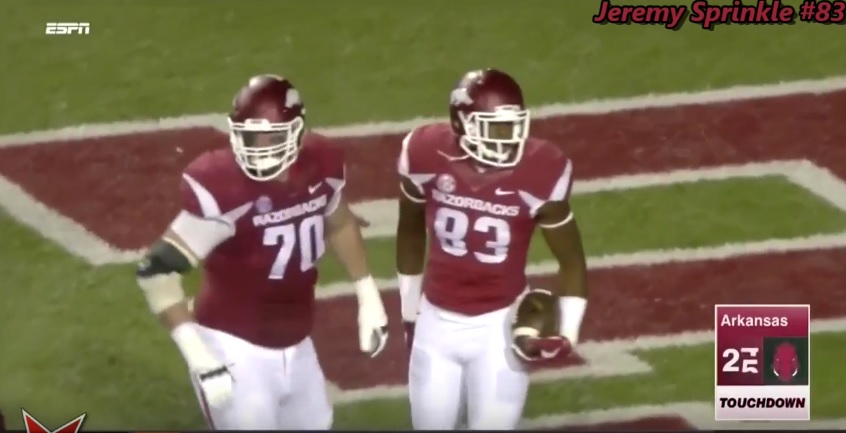 – Used as a traditional in-line, Y tight end, rare to see in college spread offense, comfortable out of a three point stance and often did
– Excellent run blocker who plays with leverage and lower body strength/leg drive to generate movement and ride out DEs in the run game
– Proper hand placement, uses length to create space, and shows ability to re-punch his hands
– Experience in pass protection and uses length to run EDGE guys up the arc though lacks lateral movement
– Physical player on chips before releasing into pass protection, team guy and old-school mentality
– Sure-handed receiver who catches away from his frame

– Below average athlete and doesn’t seem to be even as fast as his time speed (4.69)
– Slow out of three point stance and stands too tall coming out
– Won’t be able to separate on his own in the NFL and will have to be schemed to get him open, mostly off playaction
– Not going to offer much as a receiver and isn’t a vertical threat
– Lack of burst makes it difficult for him to cross face of DL on reach blocks in the run game
– Could/should he make position switch to the OL?
– Weird off the field issue to get checked out/into
– Average production in college

Sprinkle is a pretty easy dude to breakdown big-picture. He’s a really good blocker, maybe the best one in this class but that’s all he’s going to give you.

He understands leverage, hand placement, and leg drive, and it all comes together on this play to end in a pancake against a defensive end. Pretty impressive stuff.

I could show you ten different clips like that from the three games I watched and those three games were all I needed to see – plus watching him live at the Senior Bowl and at the Combine – to figure out who he was. He’s one of the few tight ends to be asked to pass protect a ton and the Razorbacks used a ton of 12 personnel. So the learning curve is much less than a lot of these guys.

But he’s a non-athlete. About as fast as a Yugo and his 40 time isn’t reflective of his field speed or lack thereof. He’s slow out of his stance, stands straight up, and his build-up speed is just below average.

And that lack of burst hurts him as a run blocker too. Reach blocks are one of the most difficult to execute but Sprinkle’s unable to cross the face of the inside shade DE end, letting him penetrate and give backside pursuit.

And there’s that weird footnote about what happened at the Belk Bowl. You can read a little more here but I gave the basics of it. Dumb thing to do, not really going to hurt his stock, but you can bet teams are going to/have asked him about it. Bizarre.

He could stay at tight end and be a pure-blocker as a #2 tight end. He’s taller than David Johnson but they could have similar career arcs. Also reminds me of the San Diego Chargers tight end Brandon Manumaleuna, who was their primary blocker for years and years.

I also wonder if some team could try to convert him to becoming an offensive linemen. Jason Peters was a TE in college. Keavon Milton, a Steeler on a futures’ contract, was a tight end who became a guard. Sprinke also compares to Chris Hubbard, who was a tackle in college, but is used as that 6th offensive linemen in Pittsburgh. So lot of names I’m throwing out, most of them who won’t inspire a lot of confidence.

There’s certainly value at tight end, especially in today’s age where you don’t find a lot of strong blockers at tight end. But that value is capped pretty low and he’ll never be a starter in the league.