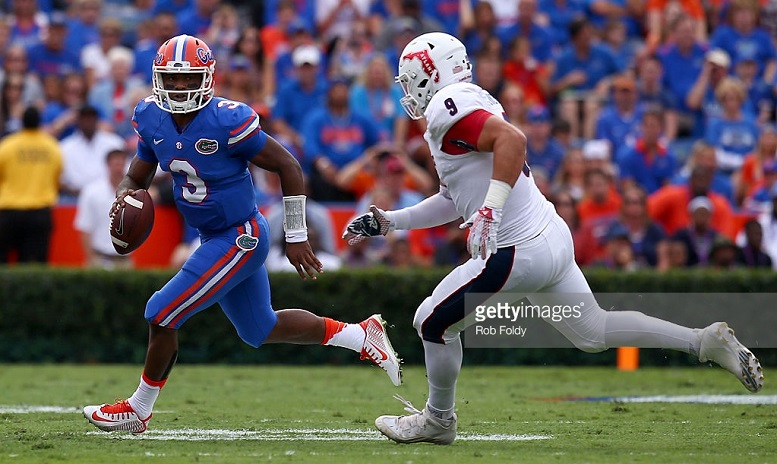 – Trouble converted speed up to bend, gets run up the arch
– Undesirable measurables, only 32” arms
– Plays too upright in run defense
– Could add lower body strength
– Allows linemen to get under him and drive him backwards too often
– Almost strictly played with his hand in the dirt

One athlete from a lesser known school and conference that has brought attention towards their draft stock recently is Florida Atlantic defensive end Trey Hendrickson. The Florida Atlantic defensive end put himself on the map after a strong showing at the East-West Shrine Game, winning Defensive MVP at the event and carrying the same dominance over to the NFL Combine. Hendrickson ranked first at his position in the 60-yard shuffle and rounded out his weekend by finishing top ten in the 40-yard dash, vertical jump, three cone drill and 20-yard shuttle.

Hendrickson’s performance garnered an immediate look at the prospect’s tape and what I was delighted to find was a high motored player with great quickness and hand work. Watch Hendrickson (who is wearing #99 instead of his usual #9) chase down a screen play from the opposite side of line.

The East-West Shrine game is not done offering a glimpse into Hendrickson’s NFL future just yet, as the defensive end also displayed great burst off the snap.

Hendrickson times the snap perfectly, showing the world his great foot quickness that he displayed during drills at the NFL Combine and quickly undresses the left tackle with his speed. And do not forget to add a bonus point for the strip sack.

Moving on to more technical aspects of Hendrickson’s game, the defensive end shows that he carries a plan of how to attack the assigned offensive lineman in front of him, demonstrating a nifty spin and swim move.

Hendrickson does not get credit for the sack on the play but the pass rush is still a product of beauty. Hendrickson’s first step gets the Florida tackle to bite and at this point Hendrickson has already won the battle. With the tackle vulnerable, Hendrickson is able to swim across the tackle’s inside shoulder and make his way into the pocket – an excellent example of how to strategically rush the quarterback.

But as much as the Florida Atlantic pass rusher excels at rushing the passer, Hendrickson still carries a fair share of flaws that need to be worked out. Hendrickson often finds himself out of position to make a way as he is too easily maneuvered out of the play.

Just as I began with tape of the East-West Shrine game, it is only fitting to conclude with the same tape. Hendrickson finds himself pushed up field and isolated from the play by the leaner Taylor McNamara, a tight end from Southern California. A lack of lower body strength is one of the biggest stains on Hendrickson’s stock.

The other stain that will knock Hendrickson’s stock down a peg is his habit to play in an upright stance. In doing so, the Florida Atlantic product often finds himself in control of an offensive lineman at the point of attack. Watch below as Hendrickson is driven off the line once again by McNamara, who is quickly becoming Hendrickson’s kryptonite.

There is enough material to validate a selection of Hendrickson come draft day and enough material that may restrict him to a strict role as a situational pass rusher. The defensive lineman comes with pro-ready quickness and hand work but brings baggage that includes fundamental shortcomings. But for a player that was widely unknown earlier in the year, Hendrickson has made the most of the pre-draft opportunities given to him and for that he can expect to be selected between the third and fourth rounds.