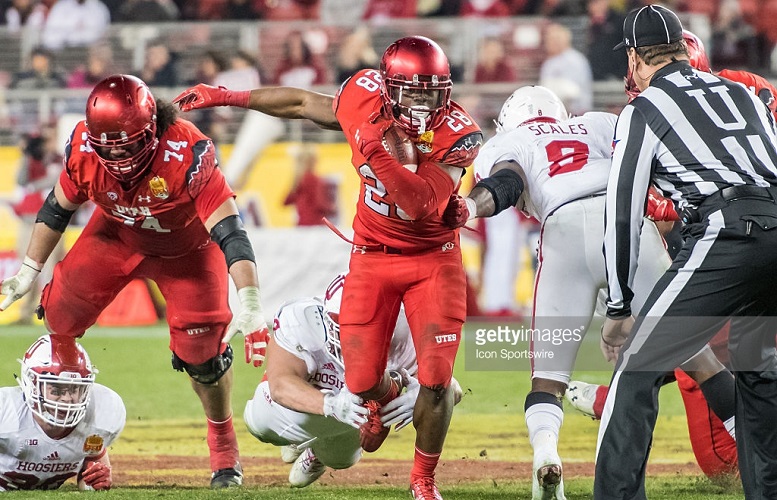 – Tremendous amount of natural athleticism to work with
– Powers through weak arm tackles
– Extremely shifty, can bounce in and out of running lanes
– Runs with good balance
– Has home run speed at the second level
– Great vision, can see running lanes develop
– Blocking is passable

– Momentum is halted when running upright, a tendency that Williams has
– Hesitates behind the line which leads to poor decisions at times
– Needs to improve ball security
– Limited as a receiver due to bad hands

After completing profiles on Kentucky’s Boom Williams and BYU’s Jamaal Williams, I felt it was only fair that I took on the last of the Williams’ trio and look at Utah’s Joe Williams. Like his two classmates, there is a lot to like about the Utah’s running back body of work.

Williams’ incredible contact balance is an item to keep your eye on and will be a recurring theme in his game-tapes. Despite not being the tallest or heaviest back in the class, Williams’ very rarely is brought down by arm tackles.

Second level defenders are no match for Williams, who keeps his legs churning throughout the pursuit enabling him to shake off multiple defenders. (And an honorable mention to Ralph Green III of Indiana who treks about 32 yards from the line of scrimmage to make the tackle.)

Though Williams tends to hesitate when a hole does not present itself, he does not waste a second when a running lane does appear. With great quickness and a smooth change of direction, Williams’ style reminds me of a young Felix Jones. The play above against Oregon is just one of the many examples of Williams’ quickness and ability to cut through multiple running lanes.

Here’s a slow-motion demonstration to truly appreciation Williams’ craft when it comes to cut and change direction.

Williams’ lateral cut slips him right in-between two Washington defenders. One of those defenders, Vita Vea (#50), mimicked the act of attempting to catch a butterfly in the process of trying to tackle Williams.

There may be an abundance of qualities to like about Williams’ play but there are a few downsides that are bumping the Utah running back’s stock down towards a day three projection.

Just by reviewing the previous plays, it is noticeable that Williams’ is an upright runner who struggles to keep his shoulders down and tends to look like a sprinter more than a running back. Running upright leads Williams to see his momentum halted as he is met by contact, such as the play below.

Another issue with Williams’ game is his inability to be a third down running back. Williams’ is a fair blocker but struggles mightily with catching the football.

Plagued with poor hands and concentration issues as a receiver, Williams will be extremely limited in an offense at the next level unless he improves the receiving aspect of his game.

But the piece of Williams’ pre-draft portfolio that stands out the most may not even be a aspect of his on field play. Williams’ “retired” after Utah’s second game last season, though he ended up returning down the stretch to aid Utah’s injury riddled backfield. Uncertainty over the decision roamed in the air for a few months before Williams took to an interview with USA Today, in which he states that it was the mental grief of a sister’s death a decade earlier that caused him to step away. And though Williams has put that information out there and I commend him for it, I still expect many NFL teams were curious to hear it for themselves in their meetings with Williams during the NFL Combine. How Williams’ fared during these interviews could be the deciding factor in where Williams sees himself selected.  Based strictly on Williams’ production and toolset, I would project the Utah running back as a mid day three selection.

Games Watched: vs Washington, vs Oregon, vs Indiana, vs UCLA