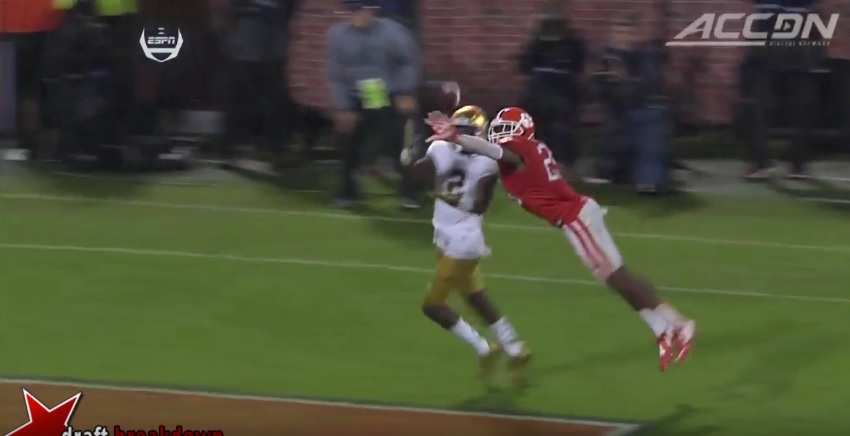 – Height/weight/speed player (32 1/4 inch arms, 4.4 40 at Combine)
– Good press man corner who wants to be physical at the line and disrupt timing
– Timed speed matches long speed, will thrive in man to man scheme
– Impressive leaper, better than how he tested, who times his jumps well and uses length to contest 50/50 throws
– Plays pocket well on non-vertical throws and again, uses length to his advantage
– Good hands and finishes plays, shows body control along the sideline and acts like a receiver in coverage
– Shows route recognition and appears to have done some pattern matching
– Experience as left and right corner, field/boundary, and appears to have shadowed opponent’s #1 receiver
– Productive career, ballhawk in the secondary
– – Hasn’t played a ton of cornerback and much room to grow and improve

– Lanky frame, needs to add some muscle
– At best, an inconsistent tackler who doesn’t show much strength
– Tackling angle is too high and causes him to miss, drag down tackler in best case scenario
– Not very physical and isn’t going to offer much in run support, can lose run fit as the force defender
– Needs a little bit of work in press coverage, will punch with wrong hand when fooled by initial stem of the receiver

Tankersley’s Clemson bio says one scouting outlet had him listed as a receiver before committing to the Tigers back in 2013. And that makes sense because there are moments where he looks like a bonafide receiver with great hands and ball skills.

Watch his body control and ability to keep his feet in along the sidelines. Looks like Antonio Brown out there.

He has good length and a long, lean frame that allows him to contest throws even on well-thrown passes. On this fade against Notre Dame in 2015, he gets full extension to bat this pass away. Big time play in a big time spot.

The bad news is that he plays like a receiver in coverage…and tackles like one, too. He missed a ton in the five cut-ups I watched on Draft breakdown. You’re not going to make every tackle of course but you have to do more than play two-hand touch, like this bizarre play against Virginia Tech. He’s number 25 to the bottom of the screen.

Tankersley thrives in press man but he is going to have to learn to play a little cleaner at the next level. He get his hand on the receiver too much to keep a feel of where he’s at and that’s going to get him in trouble. Flagged I think three times in the five games I watched. Didn’t get called for this one but could have and you can see the receiver throw his arm up, hoping for a flag. Corner at the top of the GIF.

There’s zero question Tankersley has legitimate talent. He has all the triangle numbers, is less stiff than you’d expect, and plays the ball in the air really well. But his lack of physicality, like I wrote, at best he’ll be a drag down tackler, still isn’t totally what the Steelers are aiming for. He’ll do well in a man-heavy scheme. And that isn’t something Pittsburgh will provide. For teams who do desire that though, he’ll be one of the most attractive options and could go higher than conventional wisdom.

Games Watched: at Notre Dame (2015), vs Troy, vs Georgia Tech, vs Virginia Tech, vs Ohio State