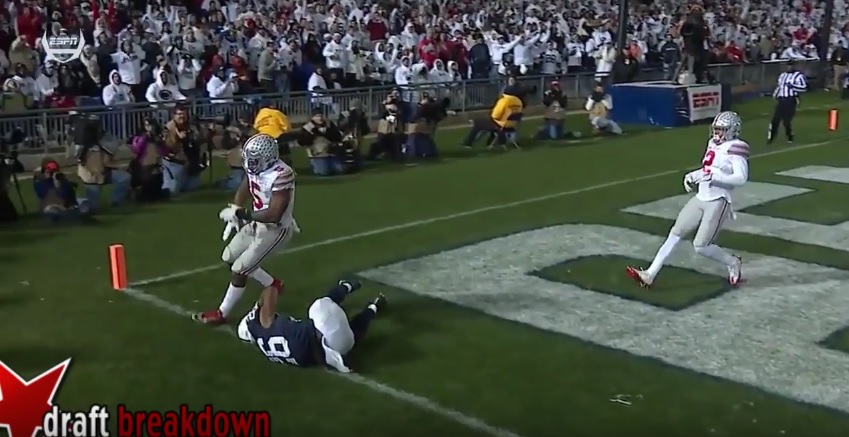 -Above-average anticipation and awareness
-Works through traffic well to make stops
-Has shown ability to “slip” blocks by understanding angles
-Sure tackler that always finds himself around the ball
-Comfortable dropping into zone coverage or playing man-to-man against RB/TE
-Ideal size and lower body strength to hold up as MLB
-Active, powerful hands at point of attack against blockers to fight through bigger OL

-Keeps eyes locked on QB too long when dropping into coverage; can be deceived
-Limited athlete in space
-Labors to change directions quickly in pursuit
-Not twitched up for position in today’s game
-Won’t routinely strike you as a tackler
-More of a reach-and-drag tackler instead of a striker

I’ll be honest up front:  I’m going to be much higher on Ohio State linebacker Raekwon McMillan than most others will be.

He’s not a super flashy linebacker with elite speed, athleticism or standout tape, but he’s as solid as they come as a tackler for the Buckeyes and he’s routinely in the right place making plays.

I love that in a linebacker.

Sure, he doesn’t have the massive hits that make the highlight reels, but when looking for a potential starter in the draft, McMillan’s track record and tape certainly fits the bill.

What stands out the most with the Ohio State product is his ability to work through traffic in front on him, especially bigger offensive linemen, to make plays around the line of scrimmage.

He understands angles so well and knows how to “slip” blocks to meet the ball carrier in the hole.

Look at the way McMillan reads run quickly, comes downhill, slips past a block and gets through the traffic in front to meet current Indianapolis Colts running back Josh Ferguson in the hole for the stop.

These types of plays were routine from McMillan in the two year’s worth of tape I watched.
He’s not the type to blow up guys in the hole, but he has great awareness, anticipation and processes things faster than most other linebackers in this class, allowing him to get into position for stops.
That being said though, he is prone to missing tackles against shifty running backs due to his limited athleticism in a phone booth.

McMillan does everything to near perfection at the start of this play. He scrapes over into the hole and avoids a blocker, putting himself in position for a clean shot on Wisconsin’s Corey Clement, but the Badger running back breaks out the quick spin move in the hole, forcing McMillan to whiff on the play.

This was one of the rare missed tackles that I counted from McMillan in 10 games. While that says how sure of a tackler he on one hand, this clip also shows that he could struggle in the NFL against shiftier running backs that make a living pulling off moves like this in tight spaces.

I do like the quick, choppy steps though to get him into position, and I strongly believe that if he doesn’t drop his head at the start of his attempted tackle, he doesn’t whiff on this play and comes up with the stop.

One of the big knocks against McMillan that I’ve heard throughout the draft process is his inability to cover running backs and tight ends in coverage.

I couldn’t disagree more with that, because what I saw during my time watching film on him was a guy who has the ability to run with most backs and tight ends, forcing tough throws from quarterbacks trying to fit it into windows against McMillan.

Throughout the 2016 season, Penn State’s Saquon Barkley was deadly on wheel routes, but against Ohio State, Barkley had a tough time pulling away from McMillan.

On this play, McMillan fakes the blitz near the line of scrimmage before sprinting to the sideline to pull even with Barkley on the wheel route.

From there, McMillan stays step-for-step with the dynamic back before getting a hand up to break up the pass.

This is just one instance of McMillan showing off his coverage ability, but later on in my evaluation process, he more than handled his own against Michigan tight end Jake Butt in coverage.

Ohio State asked him to do quite a bit in coverage, whether that was on tight ends or running backs, and based on my evaluation, he stood tall against tough tests.

Outside of his ability to play against the run and drop into coverage, McMillan is an effective blitzer when it comes to delays and twists.

He’s not one to beat offensive linemen one-on-one with pass rush moves, but when he gets a free lane he eats up a ton of ground and really disrupts the offense’s timing.

There are times though where he’s able to get to the quarterback for the sack, and when that happens his closing speed is really impressive for his size and weight.

On this play against Clemson in the College Football Playoff, McMillan does a great job of reading what’s happening in front of him before exploding forward through the gap created between the guard and tackle.

Once he’s coming forward on the blitz, McMillan closes a ton of ground quickly against Deshaun Watson, getting to the standout quarterback for a big sack in the redzone.

If you want to see another instance where McMillan completely throws off an offense’s timing, leading to a pick-6 for teammate Malik Hooker, fast-forward to the 3:08 mark here.

Overall, I really like McMillan. For me, he projects as an every-down linebacker that should have a nice, long career for a franchise that he makes very happy after they take a chance on him in April.

He has the track record and all the tools you’re looking for in a technically sound linebacker. He’s not flashy, but he’s consistent.

Sometimes that’s better than being the big name known for highlight reels.

He reminds me a lot of current Tampa Bay Buccaneers linebacker Daryl Smith, who made a name for himself as a member of the Jacksonville Jaguars and Baltimore Ravens.