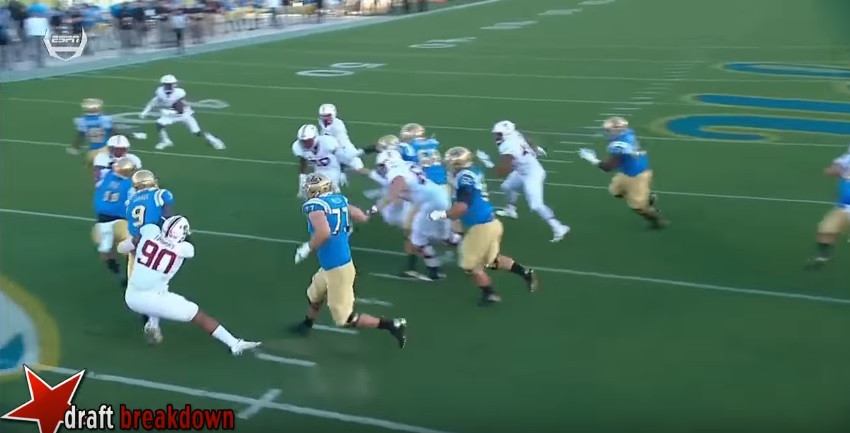 -Struggles to hold up consistently against the run
-Played out of position at Stanford, which caused issues at times due to being undersized for a 3- or 5-tech
-A ‘tweener for the NFL
-Lacks height and rarely disrupts passing lanes
-Just 11.5 careers sacks and 12 QB hits in 27 career games with Stanford

Every year in the NFL Draft we seem to have a handful of defensive players that are just simply physical freaks, and Stanford’s Solomon Thomas certainly fits in that handful of “freaks” in this year’s draft class.

Standing 6’3”, 273 pounds, Thomas played mostly 3-tech and 5-tech over the last two years for the Cardinal, but he projects to more of an EDGE player in the NFL due to his size, speed, explosiveness and athleticism in space.

Despite being out of position at Stanford, Thomas didn’t really let that affect the way he could simply take over games and dominate for the Cardinal.

With a quick first step off the ball, impressive lower body explosion and the ability to convert speed to power efficiently, Thomas jumps out on film when watching the former 5-star recruit for the Cardinal.

While at Stanford, Thomas dominated at shooting gaps, which had a lot to do with the scheme, but when shooting gaps he shows off his great first step that gets him into the hole quickly, while also showcasing his lower body explosion to fly past offensive linemen grasping at air.

Shooting through gaps and blowing up offensive linemen is basically Thomas’ trademark coming out of Stanford. Although he doesn’t have a great standout trait, his ability to get off the ball quickly and blow up linemen to make stops is really, really impressive.

Against Colorado, Thomas was a serious problem for the interior of the Buffs’ offensive line, simply because of his explosiveness and power at the point of attack.

In a big spot against Colorado, Thomas blows up this Buffs guard and then finds the ball carrier to make the stop behind the line of scrimmage.

So often when watching Thomas at Stanford, this is what you’ll see on film against the run. A lot of it has to do with his great jump at the snap, which he anticipates well, but when he fails to anticipate the snap and doesn’t get a great jump, he doesn’t have the weight and lower body strength to hold up against bigger offensive linemen in the run game.

As you can see in the clip above, he doesn’t get a great jump at the snap, which gives the UCLA double team the leg up on Thomas. From there, Thomas is driven off the ball.

Fortunately for Thomas in this instance, the run goes away from him, so him being driven off the ball isn’t that bad, but it’s still not a great sight to see on film from a defensive linemen.

There are other clips out there of this happening to Thomas throughout the 2016 season, which leads me to believe he’s not cut out to be a 3-tech at the next level. He’s at his best when shooting gaps/penetrating into the backfield or reading what’s happening in front of him, not tying up blockers and trying to protect a gap.

But for every clip there is of Thomas getting walked off the ball against the run, there’s a clip like this against North Carolina in the Sun Bowl.

With the game on the line, Thomas shoots the gap low and hard, chasing down fellow future first round pick Mitchell Trubisky for the sack to win the game for the Cardinal.

Against the Tar Heels, Thomas was as dominant all game long as I’ve seen from a DL this draft season, including Missouri’s Charles Harris.

Moving forward, Thomas is a guy that can be a serious defensive weapon who can move around the defense depending on scheme, package and down situations.

He’s a guy that I project as a 4-3 defensive end playing the Wide 9 more often than not, allowing him to pin his ears back and make plays behind the line of scrimmage. But when it comes to obvious passing downs, I could see him shifting inside into an Aaron Donald-type role to rush the passer against guards and centers that he clearly has an explosion and athleticism advantage over.

When it comes to whom I see him playing like in the NFL, I see a lot of Chris Long with some Jason Babin sprinkled in. He’s still certainly raw, but he’s a guy that can be a serious defensive chess piece for a contending team.