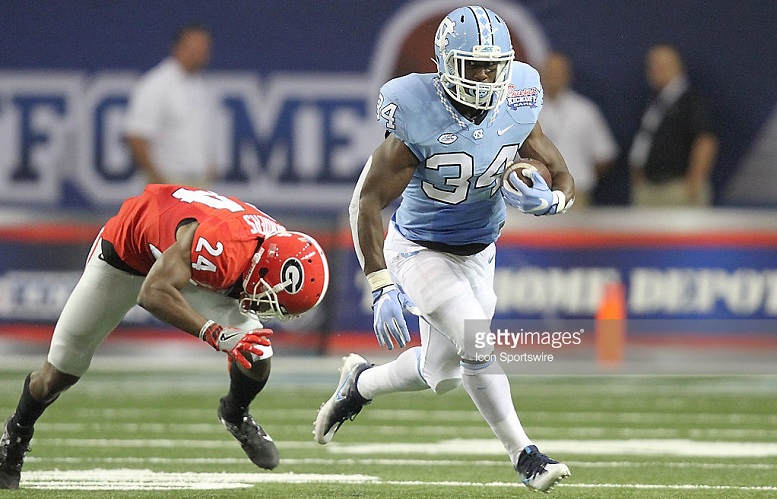 From now until the 2017 NFL Draft takes place, we hope to showcase as many prospects as possible and examine both their strengths and weaknesses. Most of these profiles will feature individuals that the Pittsburgh Steelers are likely to have an interest in, while a few others will be top-ranked players. If there is a player you would like us to analyze, let us know in the comments below

While many running backs in this year’s class group into the tweener status between size and speed, North Carolina’s Elijah Hood remains one of the only true bruising backs of this year’s class. At 5’11 and 232-pounds, Hood is a tough runner to bring down once he has a full head of steam behind him.

Hood moves like an incoming truck, bulldozing through those who get in his path. A clean finisher, Hood always manages to fall forward due to his positive contact balance. Here an example of the North Carolina running back in action against South Carolina.

As South Carolina learned, there is no easy or textbook way to take down a 230-lb pound running at full speed. It does not take much time for Hood to hit his full stride as the running back’s arsenal also includes a positively graded burst to the line of scrimmage.

While Hood may lack the speed to outrun defenses to the perimeter, the running back benefits from having space in which he can push his throttle to its capacity. South Carolina was on the devastating end once again, as they stood to watch Hood blow past the right tackle and outside linebacker. Once in the second level, Hood scampers for more yardage while displaying more contact balance towards the tail end of the run.

An immense part of Hood’s success is having an open running lane to run behind as the running back struggles to squeeze in skirmishes at the line of scrimmage. What helps Hood’s though is that the North Carolina back is willing to wait for a lane to present itself, showing necessary vision to excel.

Running behind two lead blockers, Hood does not outrun his blockers like many inexperienced running backs his age. Instead, Hood waits for his blockers to seal the edge before turning it up field. Hood is caught from behind on the play but the running back still shows better than expected open field speed from a 230-pound running back.

Just as one would not expect a 230-pound running back to win any sort of foot race, the expectations differs when it comes to pass protection. With a stout, heavy frame, Hood anchors as well as anyone in pass protection and rises to occasion regularly. Watch below as Hood anchors the momentum delivered by an oncoming Clemson defender.

The play above, which sees Clemson safety Korrin Wiggins (#15) colliding with Hood replicates the act of a bird hitting an office window. No matter the speed or momentum, it is still no match for the window, which is played by Hood in this scenario. It goes without saying that Hood’s pass blocking is his most transferable skill to the next level.

The area in which Hood will see some extreme difficulty in transitioning to the NFL is the running back’s lack of lateral agility or movement around the line of scrimmage. Hood is not a running back who can get his engine started on command and will need a fair amount of space to get going.

Hood is a very stiff runner who lacks lateral agility to create space to operate. Unless there are blockers to follow, Hood struggles to take the lead when running from east to west, craving the need for an open running lane to develop. North Carolina considered these limitations last season and acted by splitting Hood’s carries with T.J. Logan. The same fate may follow Hood to the NFL, as the running back’s one dimensional style limits his ability to ever be a high-end starter. It is more likely that Hood settles in as backup who contributes a handful or two of carries per game.

Games Watched: vs Clemson, vs FSU, vs North Carolina, vs Georgia Tech