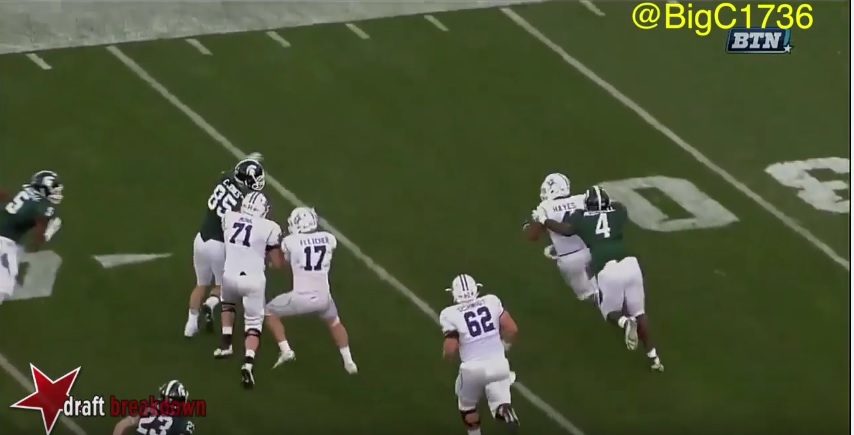 From now until the 2017 NFL Draft takes place, we hope to showcase as many prospects as possible and examine both their strengths and weaknesses. Most of these profiles will feature individuals that the Pittsburgh Steelers are likely to have an interest in, while a few others will be top-ranked players. If there is a player you would like us to analyze, let us know in the comments below

-Elite, powerful hand usage along defensive line
-Able to disengage quickly when locked up with OL to make plays
-Great athleticism and closing speed for size
-Good motor to track down ball carrier; motor revved high when locked in
-Power to anchor against double teams and stuff gaps
-Quick-twitch swim move to beat blockers when rushing the passer
-Great frame with room to add bulk
-Shown ability to play multiple positions along the DL; rush from three-point or standing up

-Struggles with awareness along interior, can run past ball carrier
-Pad level is hit or miss due to height; tends to stand up off the ball
-Pass rush plan is mostly non-existent
-Must develop secondary rush move to excel at next level
-Tends to disappear for long stretches of play
-Seemed to disengage last season due to ankle injury/lack of team success

Prior to the start of the 2016 season, Michigan State’s Malik McDowell was one of the early draft darlings for the 2017 NFL draft, considering how he dominated as a sophomore for the Spartans, playing a big role on one of the country’s best defenses that also happened to make an appearance in the College Football Playoff.

Unfortunately for Sparty, the eventual national champion Alabama Crimson Tide blew them out, but the hype train was starting to gain steam for McDowell at that point.

Despite being the big name heading into the fall, McDowell really didn’t take that next step forward that many were hoping he would, especially with a possible top 5 pick in the cards, should he have come out and dominated the college level for the second straight year.

Although he has the size, freakish athleticism and ideal tools to be a top 5 pick in this class and a future All-Pro defender, his junior season at Michigan State raised a lot of questions about his heart, work ethic and desire to be great as the 6-foot-6 defensive lineman often disappeared for stretches on a bad Spartan team.

That being said though, there’s plenty of solid tape available on McDowell, you just have to look closely, especially early in the year. As the season progressed, it seemed as though McDowell, dealing with an ankle injury, mailed it in. Can’t say I really blame him as the Spartans were disastrous this year and he had nothing to gain and everything to lose by risking further injury.

But when his motor is revved up and running hot, he’s a physical freak that is a serious problem for anyone lined up across from him.

McDowell has such a quick first step off the ball that he’s able to get onto the offensive lineman in a hurry. In the clip above, he’s able to knife through the gap, crossing the face of the Maryland offensive tackle for an unimpeded path into the backfield for the tackle for loss.

With his size, he shouldn’t be that smooth or move that fast, but it’s pretty crazy to see on tape when he’s locked in.

Against Furman, McDowell was a force all game long. While I understand that he should dominate an opponent like Furman considering his high level of talent, it’s nonetheless impressive to see him take over a game as a defensive tackle.

In the clip above, McDowell shows off his great hand usage right after the snap by understanding leverage and extension to keep the offensive lineman away from his body. Once he’s got enough room, he’s able to disengage, cross the face and show off his closing speed to bring down the running back behind the line of scrimmage.

This play alone had my jaw hitting the floor simply because of the closing speed from a guy standing 6’6” and weighing in at around 280 pounds. That’s just not right, especially from a defensive tackle.

Despite playing defensive tackle for much of his time at Michigan State, McDowell has the ability to play on the edge and in space due to his tremendous athleticism. In fact, take a look at his spider chart on athleticism. It screams “elite.”

When on the edge, he has the bend and lower body explosion to make something happen as a pass rusher despite not having much of a plan, or an arsenal of pass rush moves to work with.

Lining up across from Notre Dame left tackle Mike McGlinchey, a likely top 5 pick in the 2018 class, McDowell shows off his hand usage early, slapping away McGlinchey’s punch to then rip around his block. From there, McDowell is in run-the-arch mode to track down DeShone Kizer.

He might not look fluid here, but despite being off balance he runs the arch well to get pressure on Kizer.

Throughout his time at Michigan State, McDowell showed he could create pressure from the three-point stance, standing up or stunting. He just needs the right coaching at the next level to help him develop go-to moves that isn’t his swim move, which will likely get stopped repeatedly in the NFL due to his high pad level and linemen looking for it in pass-rush situations.

One area of McDowell’s game that I do have concerns with his is awareness. Too many times on tape during the 2016 season I saw him worrying more about his battle with the lineman across from him instead of disengaging to track down the ball carrier. It was almost as if he had a personal vendetta at times, which can be frustrating to watch when he’s playing around too much in the trenches.

This play from 2015 against Nebraska really stands out to me when it comes to his awareness issues.

While the running back is running right past him, McDowell is still in the middle of his rip move against the Nebraska lineman. You usually see this from guys with very limited chances at an NFL shot, not from someone who has the pedigree to be a top 5 pick in a draft year.

He has the ability to dominate whenever he wants.

Getting him to do it consistently is another thing.

Overall, I see McDowell as a top 5 pick without a doubt. He’s a guy that can be a game-changer up front, but with all that said, the questions about desire, work ethic and whispers about character concerns (despite never reportedly being in trouble off the field) will likely drop him into the middle of the first round.

Regardless of where he lands at the end of April, I expect him to make an impact immediately, much like former USC standout Leonard Williams — now a New York Jets defensive lineman — did.

When it comes to comparisons, that might be your best bet if you’re trying to peg McDowell.