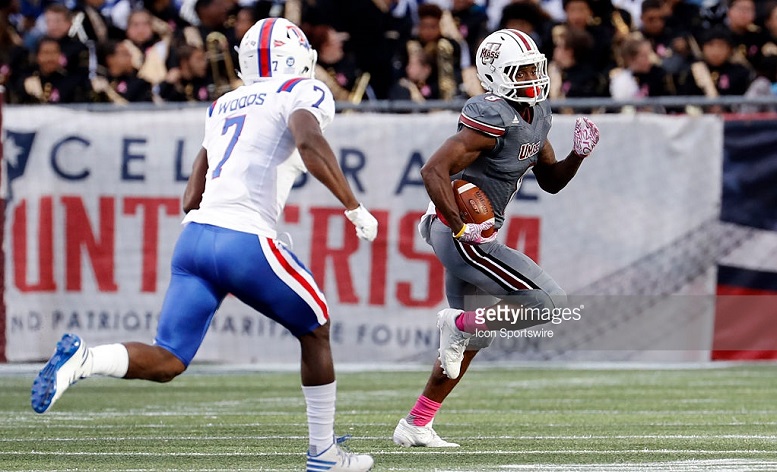 –Can line up against the slot receiver, as a free safety, or three yards back hanging over the outside shoulder of the tight end
–Keys the quarterback’s eyes and sees the entire field well
–Occasionally rushes the passer
–Takes good angles against ball carriers in the open field
–Ballhawking instincts and looks natural backpedaling
–Had five picks his senior season with good route recognition, soft hands, and a “my ball” attitude
–His gambles are more often rewarded than not
–Solid special teams contributor

– Can be aggressive player who can get caught over pursuing the ball carrier
–Likes to hit more than tackle with a tendency to attempt tackles too high
–Got taken to the woodshed by WKU’s Taywan Taylor by falling for double moves and allowing the receiver to get behind him for big plays
–Relies on his athleticism over technique, which he will need to clean up at the next level
–Much smaller than his 219 lbs. billing he was given in college.

Woods lines up against spread out slot receiver and backpedals with him step for step down the field. The defensive back tracks the ball well in the air, jumps up to snare it at its highest point, while getting one foot down (which is all you need in college) for the interception.

The defender lines up three yards away from the line of scrimmage on the outside shoulder of the tight end. He sees the play flowing to his side, steps up and gets his arms extended to try to keep the offensive lineman from blocking him. Woods gets manhandled and takes a desperate lunge at the ball carrier that falls flat.

The Bulldog defensive back is lined up against the slot receiver. Sensing the ball is about to be snapped, Woods bounces a lateral step inside and screams across the line of scrimmage when the pigskin gets hiked. The defender races into the pocket, misses the quarterback high, recovers with cat-like balance and sacks the signal caller untouched.

Woods playing at free safety, sees the run to his left and flies up towards the line of scrimmage. He takes an overaggressive angle, but flips his hips to recover and use a flying tackle to bring down the runner.

I call this play going to school. Woods lines up against Taywan Taylor in the slot. The Bulldog defender gives the receiver a free release and either underestimates Taylor’s speed or inflates his own as the Hilltopper playmaker races right past him. Woods does not recover and is thankful a fellow defender knocks Taylor out of bounds to save a score.

Woods brings a lot of athleticism and versatility to the next level. He can play slot, free or box safety positions. The former Bulldog tracks the ball well in the air and can break on it quickly. The defender flies like he is out of a cannon, out of control at times, but guesses correctly more time than not. His recklessness gets him in jams that can put the rest of the defense in bad positions. Woods is a good special teamer that will need to improve his defensive craft for a little while. I think he is a good fit for the Steelers in the sixth round as a backup to Mitchell and as a core special teamer that could be coached into more.