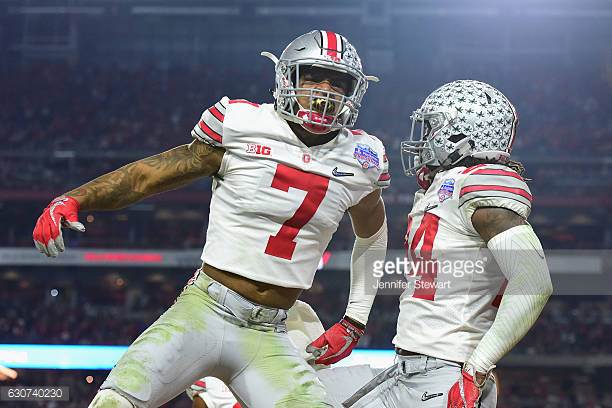 Malik Hooker burst onto the scene in 2016 with a bang, becoming one of the most dangerous defensive backs in all of college football for the Ohio State Buckeyes, who reached the College Football Playoff for the second time in three seasons.

Hooker reeled in six interceptions defensively for the Buckeyes, serving as a versatile safety that could play in the box, single-high and in the slot, matching up in zone or in man coverage while serving as a steady run defender.

Despite being steady against the run last season, Hooker needs a ton of work in that department, which is understandable considering how raw he is as a defender at the collegiate level.

Starting off in the box against the Sooners, Hooker reads run quickly and starts to slide into position, but while sliding into position he overpursues slightly, allowing Joe Mixon to cut back to his right, causing Hooker to fall helplessly to the turf.

There are times throughout the season that Hooker takes poor angles to the football when coming up into the box to support against the run, but that can be cleaned up at the next level.

What really stands out with Hooker and has his stock as high as its ever been is due to his incredible ball skills for a defensive back, which has most draftniks mentioning Ed Reed when talking about Hooker’s ability to create turnovers as a safety.

Look at the amount of ground that Hooker eats up before then coming up with a spectacular grab while falling to the ground for the interception.

Sure, the one-handed play on the ball before having the hand-eye coordination to make the play while falling is quite impressive, but his ability to read the quarterback’s eyes and close on the football from the far hash is absurd.

In fact, Hooker did something similar in the final game of the year, picking off Clemson’s Deshaun Watson in the College Football Playoff semifinal in Arizona.

Same style of play, just from the opposite side of the field.

No throw is really safe when Hooker is lined up at safety. When he’s able to play deep and read the quarterback’s eyes from a centerfield-type role, he’s deadly.

When he’s able to sit there and read what’s happening in front of him, he’s able to react quickly, putting himself in the best possible position to make plays on the ball, even if it’s a ball carrier.

Hooker reads the tight end screen quickly, allowing him to dip under a block from a Wisconsin lineman to make the stop near the line of scrimmage.

You can see Hooker taking a few steps downhill at the snap, looking to play the run, but from there he shows the patience to read the play, exploding forward to get in the best position possible to make the stop, shutting down a potential big play on the tight end screen.

Despite being so raw as a defender when it comes to identifying formations, reading plays and showing patience from the safety position, Hooker is no doubt one of the top talents in the 2017 draft, simply because of the best ball skills for a defensive back in the group, as well as his incredibly high ceiling once he figures it out at the next level.

Although there’s a very strong possibility that the redshirt sophomore struggles in his first year in the NFL, there’s not a doubt in my mind we’re looking at a future All-Pro safety at the next level.