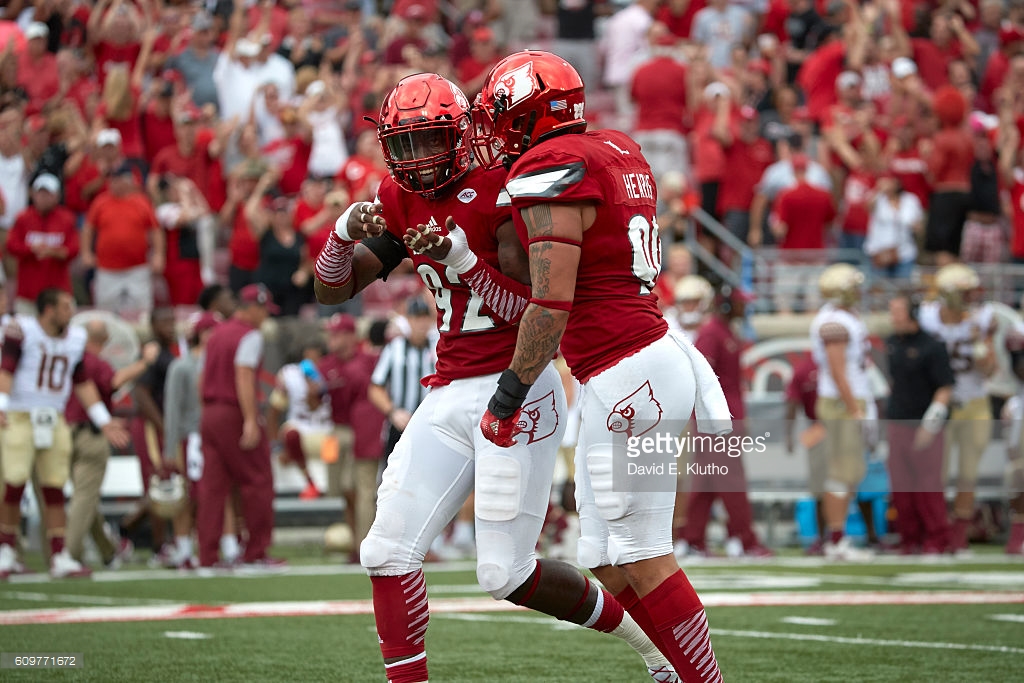 -Quick, efficient spin move to beat tackles inside
-Good understanding and awareness as a defender
-Diagnoses what’s happening in front of him quickly
-Good feel for getting hands up in passing lanes when he can’t get home
-Really strong, quick club/rip move to beat tackles around the edge
-Productive player that has lived in the backfield throughout his career

-Effort can be an issue; tends to take plays off when not coming towards him and rarely pursues plays from the backside
-Struggles to set the edge against the run
-Can be overpowered at point of attack; really struggles to anchor
-Labors to get off blocks to find the football against the run
-Limited athlete in space
-Dismissed from TCU in 2014 for threatening then-girlfriend with a gun

-Started career at TCU and recorded 10.0 sacks as a freshman, earning All-Big 12 Freshman of the Year honors
-Was shot outside of apartment building in 2014 and later was arrested on domestic violence charges for threatening then-girlfriend with a gun; charges later dropped when he agreed to go to anger management classes
-Transferred to Louisville in summer of 2015 after stint at Trinity Valley Community College
-Named First Team All-ACC in 2015 behind 11-sack performance
-Finished career with 39 games, 51.5 tackles for loss and 26.5 sacks

Dating all the way back to 2012 at TCU, Devonte Fields was expected to be the next great pass rusher in the NFL following a dominant true freshman season, but from there the talented pass rusher fell off the wagon, earning a dismissal from the Horned Frogs following an arrest on domestic violence charges.

Fields did have the charges dropped, but the incident, as well as being shot outside of his apartment building, raises serious character concerns with the Louisville product.

That being said though, on the field he was still a productive pass rusher in two years with the Cardinals, recording 16.5 sacks in two seasons, earning Defensive Player of the Year honors from Louisville in 2015.

Despite having the impressive numbers, the film tells a different story with Fields, who tends to disappear at the worst times throughout his career, including in the middle of last season on the road at Clemson where he was largely a no-show.

A lot of that has to do with effort as you can see him on film rarely putting in the effort and want-to to chase after the ball if it goes away from him. There are other times as well where it appears that he’s content just leaning against the offensive lineman on a rush attempt, taking a play off.

That’s unacceptable. Maybe conditioning is a problem that needs corrected at the next level if he’s every going to tap into the vast potential he has as a pass rusher with his size and reach.

But when he’s locked in during a game, he’s a problem for opposing offensive linemen.

Against this run by Southern Methodist, Fields blows up the tackle at the point of attack before then slipping off the contact point to absolutely bury the running back for a loss.

Effort isn’t an issue here, but this was just over four years ago. That’s a long time in football, but that potential is still there.

Outside of being a spotty run defender, Fields is a guy that has a great club/rip move as a pass rusher, allowing him to get underneath opposing tackles to bend the edge and get to the quarterback.

You’d like to see him finish a bit better on the quarterback, but a sack is a sack any way you slice it on the stats sheet.

While this was four years ago, it’s still a massive part of his repertoire.

With their backs against the wall in the Franklin American Mortgage Music City Bowl last season, Fields comes up with a huge sack in his own redzone against the Texas A&M quarterback thanks to a great club/rip move to get under the Aggies’ left tackle, getting a free run at the quarterback.

His club/rip is so fast that it’s hard to really counter it as an offensive lineman, so it’s something that he has to continue to strengthen at the next level because it can be a deadly move for him.

The thing I’m really impressed with when it comes to Fields is his ability to quickly process what’s happening in front of him, allowing him to react quickly and put himself in the best position possible.

On this play against Kentucky in 2015, Fields is able to quickly process the screen to the running back, forcing the Wildcats’ quarterback to ad-lib, leading to a near interception for Louisville.

It’s a play that will get overlooked throughout a game, but him being able to blow this up on his own by processing what Kentucky is trying to do is huge.

While effort is largely an issue, as is his limited athleticism and explosiveness based on testing numbers, he’ll have to work exceptionally hard at his craft to become a rotational player at the next level.

I can’t see him carving out a long career as a full-time starter, but as a situational pass rusher he could certainly thrive in the right system.

He has a lot of similarities to former Texas A&M standout pass rusher —and current Jacksonville Jaguars linebacker — Sean Porter, but it’s important to remember that Porter has bounced around the league with limited playing time for his inability to defend the run and win against NFL tackles.