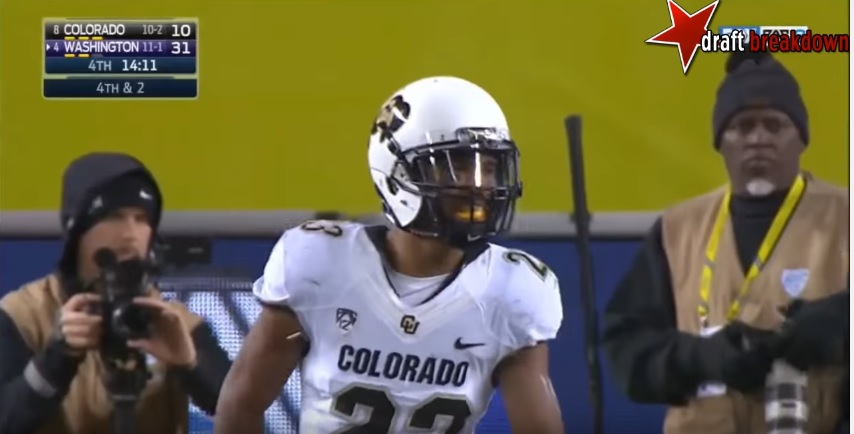 – Elite height and length (33 inch arms), lanky player who looks like a new-age corner
– Uses length to his advantage, plays the pocket really well and able to compete in plays shorter, stubbier corners wouldn’t be able to, length lets him recover, asset on the goal line especially
– Quality athlete, excellent long speed (4.45 at Combine) who can match the league’s fastest receivers, fluid turn and good change of direction ability, able to sink his hips despite how tall and long he is
– Does well to locate the football in the air, testing indicates explosiveness and he had an excellent vertical (40.5 inches)
– Uses leverage to his advantage, pins receivers to the sideline vs outside release
– Prototypical press man corner who thrives in that role
– Only three years at the D1 level, room to grow and round out his game
– Football bloodlines

– Bit lanky and may need to fill out his frame
– Large liability against the run, doesn’t show technique or physicality
– Struggles as the force player out on the edge, drifts too far upfield and loses his footing too often
– More willing to throw a shoulder into his tackles than wrapping up
– Tackling angle is too low and too often gets run over
– Not involved in the run game as he should be, seems to prefer to let others make the play instea
– Often played press man and inside leverage, will have to learn to play in other alignments
– Not much starting experience, hasn’t played a lot of football in his career
– Minor injury concerns

– 21 career starts for Colorado
– Career: 28 career breakups, 3 INTs
– 2016: 22 pass breakups (2nd in NCAA), 1 INT
– Left school as a junior
– Played one season at a JUCO before committing to Colorado
– Suffered back injury in 2014, missed spring of 2016 with mid-foot sprain
– Dad played RB in college, cousin played basketball at Rhode Island, grandfather was well known R&B singer
– Wants to be a doctor after football, Ecology & Evolutionary Biology major
– Played just one year of football in high school, was team’s CB and kicker, played basketball and baseball throughout HS plus soccer as a freshmen

Man, all these 6’0+ corners are starting to feel like the same guy. As lousy in run support as they are great in coverage. Seriously, go watch the games at the bottom for yourself because I know these reports all sound similar. But Witherspoon is like Quincy Wilson and Cordrea Tankersley. He actually might be the worst of the bunch.

But first, the good. Witherspoon has great length and uses it really well. It’s such an asset on the goal line. Not just on fades, where you’d expect, but any throw because of the small windows the red zone and goal line demand. Maybe most impressive was him recovering on this goal line slant, bringing his outside arm over the top and break this play up. For most corners, this is going to result in a touchdown.

He even has the speed to match the NFL’s fastest man, John Ross, step for step vertically.

Witherspoon is just one of those super athletes who makes everything look easy. Just looking at his bio, he’s the dude who picked everything up with seemingly little effort. Basketball, baseball, football, he could just step onto the field/court and excel. If the NFL Draft was the cast of Recess, he’d be Vince.

(I, for the record, would totally be Gus.)

But man, against the run and as a tackler, he’s horrific. It’s a good thing he’s so apt at breaking up passes. I’m convinced he does it just so he doesn’t have to tackle. It’s much worse than Tankersley and I think even worse than Wilson.

I could describe what is happening here but I don’t think I have to say anything. You all know this is ugly. He’s #23, the RCB in the first and third clip and the LCB in the second.

All of that is depressing. He struggles finishing the tackle and half the time, isn’t even involved in the play. Why he needs to play in a man scheme to minimize those issues. Let him play the man and stop the catch instead of tackling the catch.

He profiles as a similar cover corner as Tankersley and I think even a little better than Wilson. I don’t know if Witherspoon’s issues as a tackler is a want-to thing or a guy still kinda new to football and trying to figure things out. If a team thinks it’s the latter, it’s a project worth taking on. If it’s the former, it might be best to look elsewhere. High-risk, high-reward pick.

Games Watched: at Michigan, at Stanford, vs Utah, vs Washington