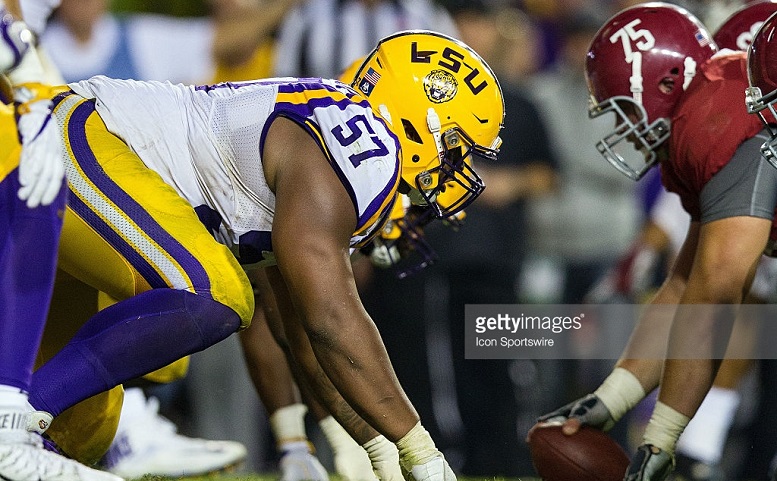 –Started 26 of 35 games played.
–Finished with 51 career solo tackles, 88 assists, 19 tackles for loss, 12.5 sacks, 2 forced fumbles, 2 fumble recoveries, and 3 pass deflections.
–Tore his ACL his senior year of high school.
–Was named a U.S. Army All American.
–Pulled his hamstring during NFL Combine and could not complete his drills.
–Had home shot up with his older brother as the intended target

Godchaux is the last defender to get off the snap of the ball while playing 5-tech. He comes up too quickly out of his stance, stunts inside while ducking underneath a double team, but the ball is already out.

The Tiger defender lines up as a 3-tech, keeps his hips underneath him, and stands up the guard lined up across from him. Godchaux jams the o-lineman and lets RB Corey Clement run right into his clutches. The defensive linemen grabs a hold and forms a pile for little gain.

The defensive tackle fires out quickly into the A-Gap, starts low and punches well with a fellow defender behind him. This knocks the center back on his heels, while Godchaux body blocks himself right into Auburn’s signal caller Jeremy Johnson for the sack.

Godchaux playing 3-tech on the game’s first offensive snap, out hand quicks the guard while stunting outside showing off good athleticism for a 310+ lbs man. The defender lunges at NFL hopeful Patrick Mahomes II, swatting him down for an early sack.

Once again, the Tiger defender is the last one to fire out across the line of scrimmage. He notices that the o-line lets him by quickly, turns his body quickly as he sees Mahomes throw the screen pass over him, and chases the receiver down the field.

The former Tiger defensive lineman is more athletic for a big man than you would think; however, Godchaux has a bad habit of being the last man firing across the line of scrimmage. He does his best work defending one gap in a 4-3 than he would playing nose or defensive end while defending two gaps as the Steelers scheme would require him. His shorter arms allow double teams to be more effective on him. While I saw plenty to like on his tape, his conditioning and domestic issues make him a bit weary of selecting him especially with his better fit in a 4-3 defense.