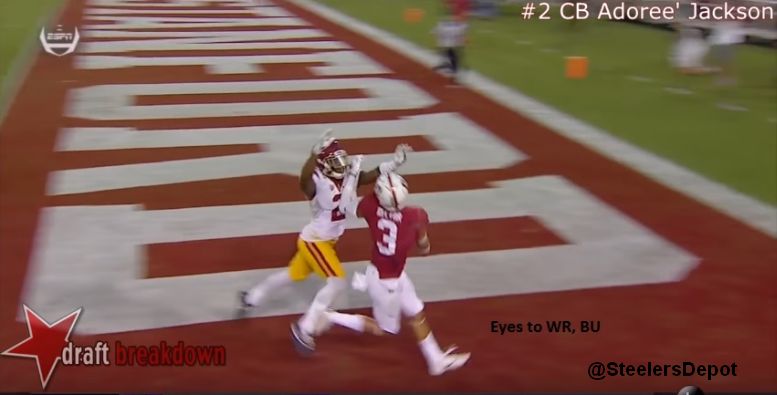 – Tremendous athlete, great feet and change of direction ability, very fluid overall
– Straight line speed is excellent and will run most foot races, timed speed matches game speed
– Good recognition ability in off coverage with a quick click/close, no wasted motion
– Impressive ball skills and ability to play the ball when it’s in the air either vertically or underneath
– Willing run supporter and competent tackler who puts his face in the fan
– Shows technique in coverage, works to stay in-phase and knows when/when not make a play on the football vertically
– Offers a ton of value in the return game as kick/punt returner, also used as a gadget player on offense
– Aggressive in press, willing to mix it up, and knows when to disengage and play clean
– Has played both corner spots and gotten reps in the slot

– Obviously undersized and some won’t peg him as an outside cornerback
– Lacks strength on the outside and too often gets stuck on stalk blocks, pushed around by bigger WR
– Below average strength and average length makes it difficult for him to play the pocket and rip the ball out of receiver’s hand
– Footwork looks a little clunky in press coverage, on his heels, and trouble mirroring the stem of the WR on his release
– Position at next level is a little vague, doesn’t have a ton of reps in the slot, his likely position the next level, and could take some time to learn

You can debate a lot about Adoree Jackson. Where he fits, if he’ll succeed, and the like. But there’s one thing you can’t debate – he is one heck of an athlete. In pads, he runs like he did in shorts at Indy, turning in a 4.42 at the Combine.

Twice against Alabama, he tracked down this running back in the open field to save a touchdown. Dude has wheels.

He has good recognition skills in off coverage with the ability to click/close and make a play on the football. Decent length for his size and though he doesn’t play the pocket that well, when it’s in the air, he makes an impact.

And on this nine route, he’s playing the ball, high pointing it and picking it off. 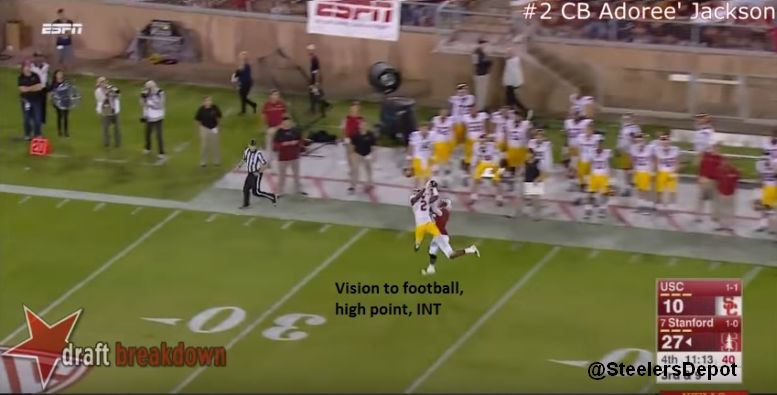 There’s a strong return background and he had a high level of success in a big-time conference. This is usually where I remind you of Mike Tomlin’s aversion to defensive players but given Jackson’s offensive background, he was more receiver than corner early in his career, he might be an option in Year Two. He’s been lectured about ball security and knows its importance. So it’s on the table.

On the negative side, his footwork is a little clunky in press and while I generally like him against the run, he gives effort and is a decent tackler, his lack of size makes it difficult for him to live on the outside. Gets owned on this stalk block on this WR bubble.

Given his strengths/weaknesses and the layout of the Steelers’ roster, Jackson would be an easy decision to move into the slot. He’s a little less raw than I thought/heard going in and I think given how strong of an athlete he is, similar to Artie Burns, the predictable growing pains can be masked by that. Definitely in the conversation if he’s there at pick 62.