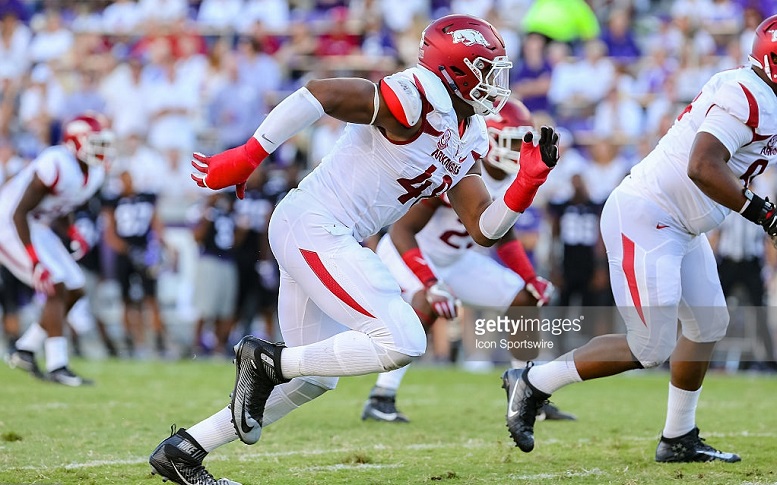 – Limited athleticism leaves Wise exposed when chasing to the perimeter
– Struggles to set edge consistently
– Often fooled on option handoff, giving up substantial yardage
– Lower body strength does not match upper body power, driven back in run defense
– A step too slow to diagnose and react to runs headed in his direction
– Lacks a counter move as a pass rusher

If there’s one player in this year’s draft class that stands as if he was created for the sole purpose of wrecking havoc on the football field, it is Arkansas’ defensive lineman Deatrich Wise. Scouts ears perk up at the mention of Wise’s 35 5/8” arms and 10 ½” hands, rare length for a position where measurables can make or break one’s stock. With an incredible gift at his disposal, Wise is one of the more captivating mid round prospects in an defensive heavy class.

Wise’s natural arm length gives him an edge over the competition as the Arkansas end uses his strong arms to control lesser talent. Watch below as Wise uses his arms to control and disengage Drake tight end Eric Saubert (#85) on the play below.

Waiting for the run to develop, Wise keeps a high pad level on Saubert before whipping the tight end out of his way to make the tackle.  Wise’s ability to stack and shed is a great building block for his potential to be more than just a five technique pass rushing end in the NFL.

After a lacklustre follow up campaign to his eight-sack junior year, Wise made sure to put on a clinic at this year’s East West Shrine game by exhibiting the pass rush potential that he seemed to lack last season. Watch Wise use his quickness and size to bend around Vanderbilt’s Will Holden (#58) on the play below.

While Holden is no slouch, being voted Second Team All-SEC last season, Wise’s quick first step is no match for the slower Holden. For a player of Wise’s frame, 6’5 and 271-pounds, bending the edge at that quickness is a rare commodity that many teams would like to claim.

After reading Wise’s size, it really should not come as a surprise that the defensive lineman also possesses some impressive bull rush potential. And while Wise may have fell flat in this area last season, the Arkansas end clearly displayed the physical strength in him in a 2015 matchup against LSU.

There are a few solutions for stopping 35” arms supported by over 270 pounds, LSU (and now Pittsburgh Steeler) left tackle Jerald Hawkins is not one of them. Hooking at a high pad level once again, Wise is able to drive back Hawkins straight into the LSU quarterback for an easy sack.

While Wise’s upper body strength leaves little to question, his lower body invites all sorts of questions due to its lack of power. Wise finds himself too upright and overpowered when his blockers engage rather than step back in pass protection. Here is an example of Wise’s faults from a 2015 matchup against Auburn.

Wise, who is in a three technique here, is driven backwards by the Auburn guard before being pummelled over by the Auburn running back as well. For a player of Wise’s size, he cannot continue to find himself handled by opposing blockers or the Arkansas end will become a defensive liability in run game at the next level.

Another weakness notable in Wise’s film on more than a few occasions, is how slow or incorrect he can be at times to diagnose the handoff. Wise is not a player who will have the speed to limit the perimeter but he makes it no easier on himself when he takes himself out of position.

Here is one of many occasions where Wise is fooled on a handoff. And while it is plausible that Wise has duties on the running back, he pays no attention to the reality of the quarterback keeping the ball himself. Wise may not have to worry about many quarterbacks scampering on an option in the NFL but he will need to recognize play action and draw plays without playing right into the opponent’s hand.

Wise’s size does have the ability to play both as a three technique and five technique end, but will need to see improvement in run defense before he can be seriously considered as anything more than a 4-3 pass rusher. Having measurables that beat Chandler Jones and Ziggy Ansah, teams looking for a one gap end with upside will have their eyes on Wise early in the middle rounds.