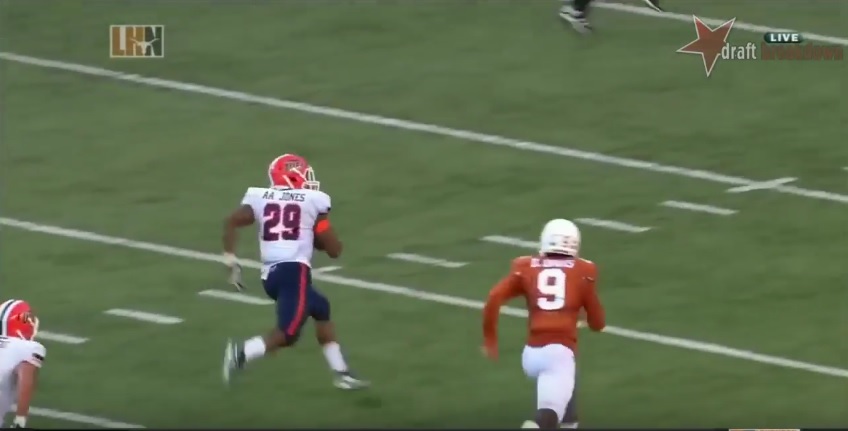 -Physical runner with powerful, compact frame
-Dishes out punishment coming downhill
-Great stiff-arm to knock defenders to the ground
-High effort, high energy guy who fights for every yard
-Refuses to go down on first contact
-Good burst and breakaway speed in open field; rarely caught from behind

Throughout the draft process, you often stumble across guys you’ve never heard of from smaller schools. Often times when this happens, you come away impressed with what that guy can bring, which is what happened with me when I popped on the tape of Texas-El Paso star running back Aaron Jones.

Jones was the Miners’ workhorse under head coach Sean Kugler, a former offensive line coach for the Pittsburgh Steelers.

Despite standing just 5’9”, Jones is a physical runner who looks to dish out punishment on defenders any chance that he gets.

Despite being off-balance slightly leading up to the point of contact, Jones is able to lower his shoulder and simply bowl right through the Texas Tech defender.

In previous games that I had watched of Jones prior to the Texas Tech game, he didn’t show a ton of power, so this got me out of my seat in a big way.

He’s shown flashes of having great speed and hitting the hole at full speed, but by being able to add power to his game, he was able to really take advance of unsuspecting defenders.

A big thing with Jones’ game is the want-to as a runner. He fights for every single yard that he can when the rock is in his hands, and that seems to have worn off on the rest of the offense as I saw receivers refusing to go down on first contact, as well as the multiple quarterbacks they rotated in throughout the last three years with Jones.

But this play right here, late in the game against the Red Raiders, is special.

At 5-feet-9, 208 pounds, Jones shouldn’t be this powerful. Yet despite being stood up after the initial contact, the Miner star continues to fight for the extra yardage and stretches out every inch of his frame for the touchdown.

You’ve got to love that.

When not displaying his power as a runner, Jones often looks like he’s shot out of a cannon after receiving the handoff. When he sees even the slightest crease he turns on the jets, which often causes him to look like he’s on fast forward.

He’s just a blur after receiving the handoff, knifing through the gap in the Texas defense before turning on the jets to run away from everyone.

Although he’s not very patient as a runner and rarely seems to let blocks develop in front of him, when he gets a lane like this with a full head of steam, it’s almost always over for the defense.

That being said though, I’d like to see him develop some patience as a runner without losing that edge where he’s looking to run through defenders. You can’t just be a guy that pounds it into the gut of the offensive line over and over again without any lanes, looking for the slightest of cracks to squeeze through.

If he could develop some patience and still maintain his physicality, he could carve out a role as a change of pace back looking to wear down defenders at the next level.

The biggest knock on him though will undoubtedly be his size, but despite having a stout frame for a running back, he’s actually an impressive athlete when it comes to testing.

Just check out his spider web here from mockdraftable.com. Look at some of the guys his testing numbers compare to. Not bad, huh?

Overall, I see a guy who can carve out a nice career if he can shake the injury bug that took nearly 13 games away from him in three years, including nearly all of his junior season.

He’s got the power, the speed and can develop into a threat as a pass catcher in the right environment due to his athleticism and work ethic. I can see a Kevin Faulk-type career, but he compares more favorably to current Baltimore Ravens running back Kenneth Dixon in almost every way.

If I were a GM, I’d probably take a chance on Jones at late in the 5th, but it wouldn’t shock me if he’s on the board in the 7th or goes undrafted due to his arrest for DWI and the injury issues.