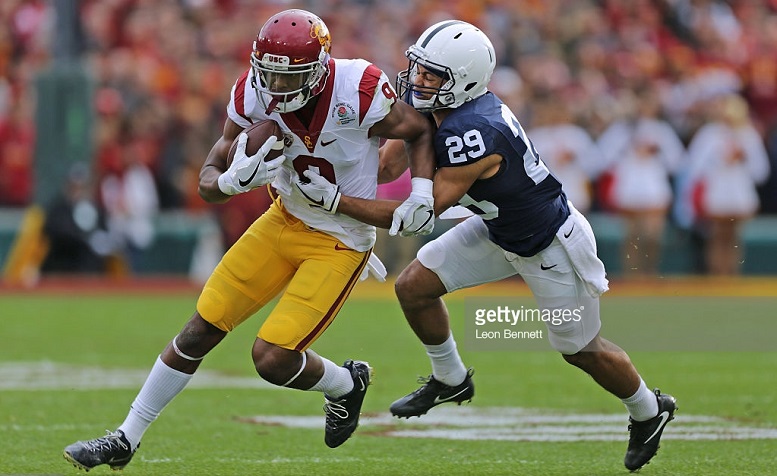 – Great Deep threat who can consistently separate from corners on vertical routes
– Tracks the ball well in the air and is reliable on over-the-shoulder catches
– Experienced against press coverage and able to get a clean release
– Makes contested catches on deeper routes
– Good Red Zone Target
– Shows fantastic effort: Works to get open and blocks downfield

– Needs to improve strength: He was sometimes pushed around when blocking and was susceptible to being rerouted by linebackers or corners
– Ran a simple route tree and did not demonstrate anything exceptional in his patterns
– Struggles to break tackles
– Needs to become more deceptive in his route-running: rarely stems his routes on short/mid patterns and does not use convincing head/body fakes

There’s not a ton to say about JuJu Smith-Schuster’s game. He’s a genuine deep threat who can consistently beat press-man coverage; he is a quality red zone target with good jumping ability; and he is a guy who works hard and gives maximum effort on each play. He will need to improve his strength, as well as his overall versatility in order to be a truly dynamic receiver in the NFL; however, he presently has a skillset that will allow him to be a contributer on Sundays.

This first clip against Wisconsin illustrates Smith-Schuster’s ability to get a clean release, separate from man-coverage, and finish plays with spectacular receptions. Specifically, he uses his footwork to get the corner to (slightly) turn his shoulder’s inside and he creates separation by knocking down the defender’s hands at the beginning of the route. Also, notice how Smith-Schuster saves space on the outside, which prevents the defender from recovering and gives his QB a clean area to make the throw:

Next, Smith-Schuster uses a crisp double-move to get open against UCLA. The move itself isn’t anything extraordinary; however, he does a good job of accelerating past the defender and avoiding contact out of his break. Probably the best part of this clip is the way he tracks the ball in the air and how he is aware of the sideline, attributes he repeatedly demonstrated on film:

One of the very first things that I noticed about Smith-Schuster was how he never gave up on a play. Whether it was by running man-coverage corners downfield on run plays, trying his best to block, or working to get open on QB scrambles, he seemed to always give full-effort on every down. For example, in this play against Wisconsin, Smith-Schuster works all the way across the field on a dig route, navigating through multiple passing windows, before his QB rewards him with a reception on the opposite sideline. NFL coaches will certainly appreciate this type of work ethic:

On the negative side, Smith-Schuster could benefit from some extra time in the weight room. Specifically, he was susceptible to being rerouted on crossing routes and sometimes struggled to make contested catches in the short game after being bumped/pushed by aggressive corners. Moreover, although he showed decent technique and effort, he was often an ineffective blocker because he simply lacked the requisite strength to move defenders. This play against Arizona is just one example where Smith-Schuster’s lack of physicality leads to a negative result:

Overall, Smith-Schuster is a solid deep-threat receiver who can contribute to a team that needs help on the outside. He was very reliable on verticals down the sidelines and showed a consistent ability to beat press coverage. Although he could benefit from improving his strength and route-running versatility, he nevertheless has the potential to contribute on an NFL roster because of his knack for hauling in deep passes.