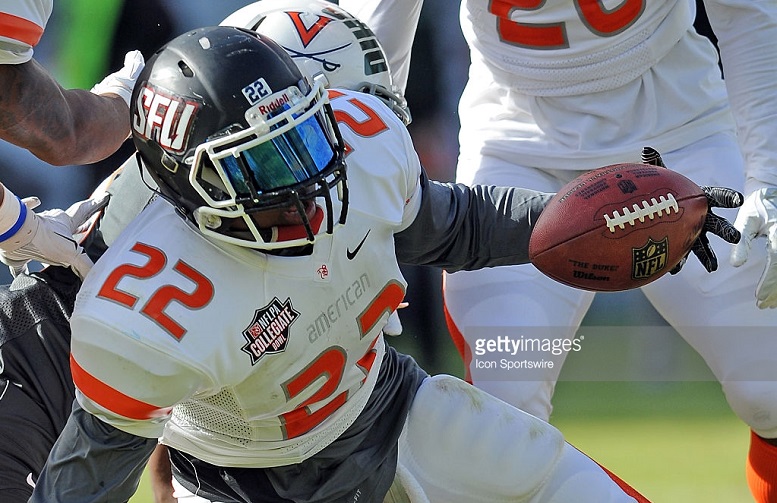 – Electric punt and kick returner
– Instinctive player who has a knack for the football
– Soft hands, catches the ball well
– Has closing speed to make plays around the line of scrimmage
– Shows quality backpedal speed to break up passes
– High motor
– Familiar with playing in the slot

– Over pursues ball carrier, blowing right past his target
– Gets caught staring at the quarterback, allowing receivers behind his back
– Could be more physical in the box
– Change of direction speed limited by robotic hips
– Lacks second gear that limits his potential as a kick returner

Located in Loretto, Pennsylvania is the university of Saint Francis but do not be fooled by the school’s small reputation, as it is home to one very intriguing safety prospect. A big-time player in a small school, Lorenzo Jerome has roamed the Saint Francis secondary for the better part of four years and is looking to be the latest FCS star to make a name for himself in the NFL.

After tallying 18 interceptions in four seasons at Saint Francis, Jerome’s instinctive play is the first item that jumps out on his tape. While many of Jerome’s interceptions are the result of him playing centerfield in the secondary, he does flash impressive ability to hover to the ball in other areas of space.

Jerome is what many analysts would call a ball magnet, the Saint Francis safety just has a knack for making plays around the football. Jerome’s great hands and ability to catch away from his body make him able to nab some interceptions that others at his position would not be able to.

Continuing with Jerome in coverage, the safety back pedal speed is another important aspect to his elite instinctiveness. Watch below as Jerome (on the right) senses where the quarterback is going with the ball and breaks up the pass by connecting with the ball at its highest point.

One part of Jerome’s game that is sure to put him in good graces with coaches everywhere is his high motor play. The Saint Francis safety plays until the whistle and never decides to remove himself from a play, in fact Jerome is more likely to be the one who finishes a play because of his non-stop hustle.

After beginning roughly five yards behind the line of scrimmage, Jerome hustles his way back into action and makes the tackle on the Villanova running back about 30-yards from where he began.

Jerome’s play at Saint Francis earned the safety enough recognition to receive an invite to the 2017 Senior Bowl where he only flashed his playmaking skills to a national audience. Alongside the two interceptions, the Saint Francis representative also forced a highly impressive fumble. This forced fumble was a testament to Jerome’s play recognition and pursuit skills as the safety crashes into the backfield to sniff out an end around play.

One of the only knocks on Jerome’s resume is one that attaches to many ball hawking defensive backs across the game. Jerome’s tendency to watch the quarterback’s eyes leads to brief relapses of discipline in which a wide receiver is able to slip behind him for a big gain.

It is hard to diagnose with the limited field view, but it appears that Jerome is responsible for the left side of the field but a Villanova receiver is able slide behind him and the entire secondary for a long touchdown. Adjusting from the leisure of FCS competition to the top end play of the NFL could prove to be a tough obstacle in the safety’s path.

Though the safety had a great showing at the NFLPA and Senior Bowl, Jerome did not assure scouts with his disappointing performance at the NFL Combine. With a 4.7 40-yard dash time, Jerome faces doubts about whether he can replicate his FCS tape with the speed of an actual NFL game. With no definite answer available, Jerome will have to continue performing at a high level on the biggest stage to overcome the odds set in front of him.

Games Watched: vs Villanova, vs Georgetown, vs Robert Morris