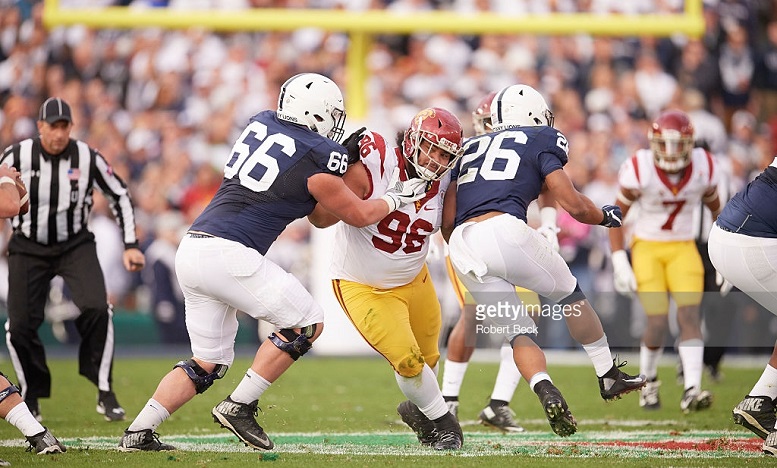 –Explosive, powerful first punch that can be felt by blockers’ ancestors
–Agile, low to the ground, moves well side to side
–Demands and controls double teams
–Great in short yardage, forming a pile on the line of scrimmage
–Played mostly across from center, but would occasionally play some 3, 5 and 7 tech
–Dropped back into pass coverage, looked awkward doing it, but athletic enough to try

–He is quite round in the middle
–Doesn’t always try to separate, allowing blockers to remain in way clogging path but not attacking as much as he could
–Very limited pass rusher
–Most likely a two-down player
–Doesn’t have much speed or conditioning past 10 yards in any direction

–Began his college career in 2009
–The almost 26 year old (June 1991 birthday) is married and spent 3 football seasons in the Philippines for the Mormon church
–Missed 2013 season with foot injury
–Started his football career in Utah and was a student assistant coach for them in 2015
–Lived in his car for part of redshirt senior year, waiting for housing to come through
–Finished with 46 career solo tackles, 43 assists, 9 tackles for loss, 2.5 sacks, 4 fumble recoveries, and 3 pass deflections

Explodes into the center off the snap while pushing him back. Tu’ikolovatu flows towards the ball carrier and knocks the guard down with his lower body at the same time he is moving with the center. The defender keeps his balance and flows towards McCaffrey.

Once again Tu’ikolovatu gets across the line of scrimmage quickly into the center and knocks his back with his outstretched arms. The defender keeps his arms outside wearing the center like a coat down the line pursuing McCaffery. He swats the center away, then the guard, moving quickly with great balance down the line to watch the tackle getting made. This shows good pursuit and balance.

The defender lined up in 7 tech on the outside of the offensive tackle in a two down linemen defensive formation. Shuffles back awkwardly to drop back into pass coverage in the flats. This was very athletic for a 331 lbs man.

Tu’ikolovatu uses his explosive first punch, knocking the guard back on his heels. He keeps his arms extended. Once the defender sees the QB cocking back to pass, he jumps and throws his arm up to block his attempt. This forces the signal caller to run out of the pocket instead.

The non-traditional draftee, 26 year old Stevie Tu’ikolovatu, makes for an interesting selection on Day Three. The defender was literally a man playing against boys. He has powerful trunk-like legs that flow well down the line of scrimmage and has a strong upper body that can eat up double teams. Tu’ikolovatu is most likely a two-down nose guard, who got moved around on the line in college, but couldn’t do that at the next level. The former Ute and Trojan would be a good backup to Javon Hargrave if the Steelers decided to select him.

Games Watched: at Stanford, at Penn State, at Washington, vs. Notre Dame