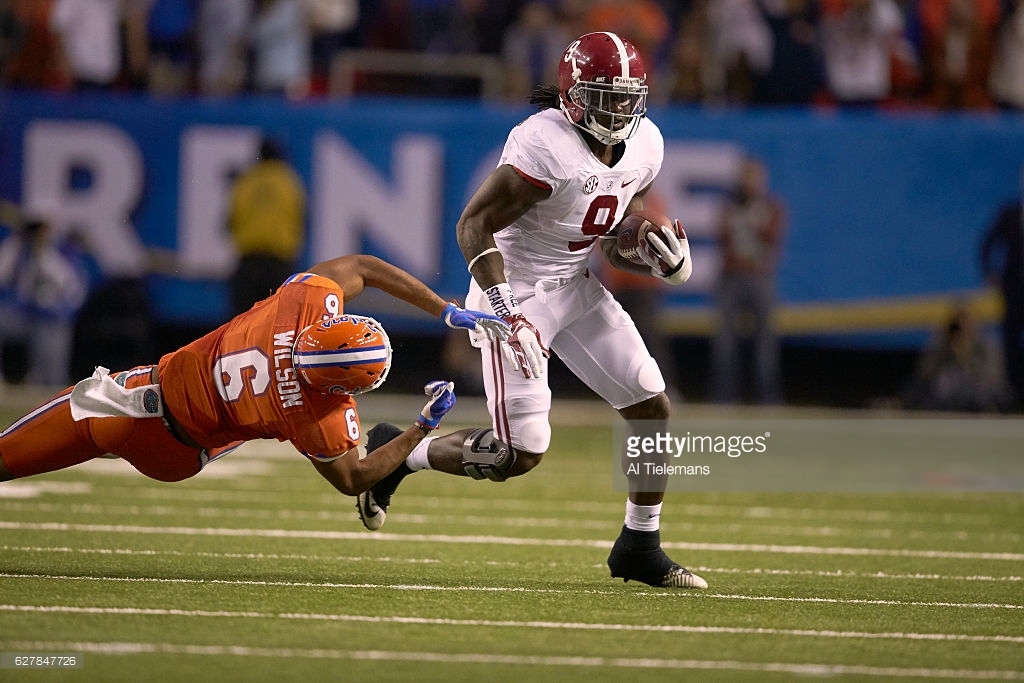 – Prototypical size with decent length (32 1/4 inch arms)
– Fluid player, timed and game speed match up, with a fluid turn relative to his size
– Stays in-phase in man coverage, even against smaller WRs, and uses length well to play the pocket to contest throws
– Experience in and does his best in press coverage, hand usage and punch improved, uses leverage well to pin WR to sideline on outside releases
– Good anticipation and understanding of where routes break, isn’t fooled by double-moves and aggressive nature always him to be a playmaker, shows confidence in his skillset in coverage
– Shows effort chasing plays downfield
– Hasn’t played a lot of football and has room to grow and improve

– Really struggles against the run despite having the frame to make an impact, missed too many tackles
– Not physical or aggressive in the run game, cut-down type tackler who doesn’t show a lot of technique
– Poor job of getting off stalk blocks
– Doesn’t seem very interested in getting involved vs the run, holds gap initially but doesn’t get involved in the scrum after the RB crosses the LOS and doesn’t give top effort if other players are around
– Testing didn’t indicate high level of explosiveness (32 inch vert, 9’10” broad)
– Has to open hips sooner in press man instead of waiting until the WR is even and beats him
– Spent a lot of time as the boundary CB, will have to learn how to play more in the field with additional space, RCB only
– Average starting experience and production was not great

You can sum Wilson up in about ten seconds. Strong in coverage, bad vs the run and a tackler overall. The latter, arguably even worse than Clemson’s Cordrea Tankersley, who I criticized pretty good a week ago. Let’s look at both.

Obviously, Wilson has the frame to play on the outside the Steelers are likely interested in. He’s big, experienced in press, and a fluid player, especially for his size, where you’d expect him to be stiff. Has length and ball skills to challenge throws.

And the ability to read and break on the throw, resulting in this pick-six.

He has the tools to thrive in press-man. The punch in press, his feet, his fluidity, long speed, and ball skills. I really like how high he carries his hands, too, elbows in and ready to punch. 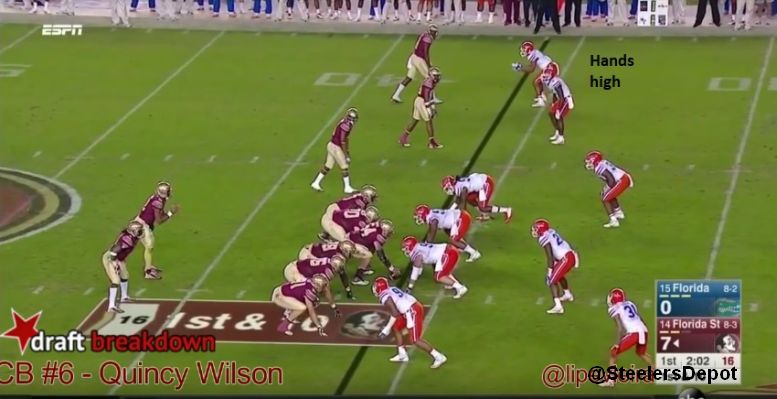 Looks like he made that change from 2015, where he let his arms dangle. 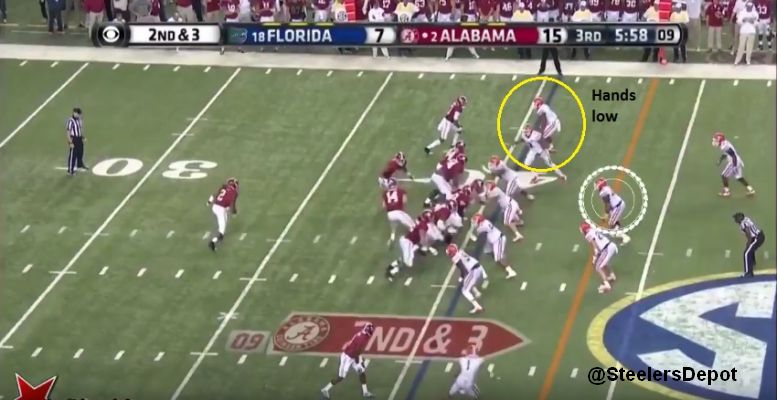 To the bad…it’s his run defense. His lack of tackles hints at that but the tape really shows/confirms it. Which really sucks because he’s a big dude. His physicality doesn’t match. In 2016 against Alabama, a pro-ish style offense with some big uglies, I counted at least four missed tackles. Like this one. Stiff-armed into the turf, a really ugly example (and the play of the photo at the top).

Or here, where Wilson doesn’t miss a tackle but is very passive. Again, the RCB turned spectator.

I think I like Tankersley more than Wilson because Tankersley at least looks like a decent-enough wrap up tackler. Wilson fits what the Steelers are drifting towards with his size and coverage ability. But it’s really hard for me to get over his extreme struggles in run defense.

But, looking at how the draft may shape up, if the Steelers go EDGE at 30, Wilson may be the best tall, long, cover corner at pick 62. So definitely don’t rule him out.

Games Watched: vs Alabama (2015), at Vanderbilt, vs Missouri, at Florida State, vs Alabama