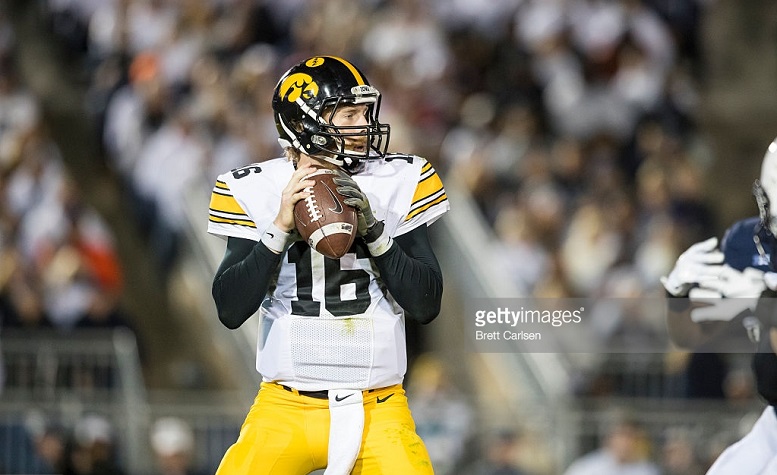 – Played the majority of his snaps from under-center and is very comfortable performing traditional drop backs
– Good Mechanics: smooth and compact throwing motion; stays balanced and ready to throw during his drop backs; balanced movements when shuffling in the pocket
– Showed consistent accuracy and good zip on short/intermediate routes
– Demonstrated decent touch on intermediate fade routes
– Has enough athleticism to scramble behind the line of scrimmage
– Stands tall in the pocket
– Safe Player who will frequently hit his check down or throw the ball away

– Poor Pocket Awareness – often took brutal sacks that were avoidable
– Was rarely effective when taking shots deep down field
– Played in a limited passing scheme – Iowa’s passing offense consisted primarily of short throws and screens
– Arm Strength drops off on deep passes
– Limited field vision – he was often baited into interceptions or dangerous passes, especially on flat routes
– Often holds the ball too long leading to sacks and fumbles
– Played in a run-heavy offense and his limited exposure to sophisticated passing concepts

C.J. Beathard was a fine quarterback and steady leader during his time at Iowa; however, his skill set is probably too limited for him to become a franchise QB in the NFL. He does not see the field particularly well, he struggles to sense incoming pressure, and he did not demonstrate an ability to push the ball vertically downfield.  Consequently, he will probably be a late-Day 3 selection and will have to fight to make a roster.

On the positive side, Beathard was a quality passer on short and intermediate routes.  He threw the ball with decent velocity, showed good accuracy, and was not afraid to hit receivers in small passing windows when necessary. For example, on this play against Miami (Ohio), Beathard does a nice job of holding the safety with his eyes, before delivering a strong pass down the seam for a touchdown. Additionally, this camera angle gives a good view of his compact and over-the-top throwing motion:

Beathard’s mobility behind the line of scrimmage is another strength of his game. Although he is not a duel threat QB, he was still able to extend plays and help give his receivers more time to get open. Here against North Dakota State, he shows his athleticism by taking advantage of the DE’s poor rush angle and escaping to the outside. He also does a nice job of keeping his eyes downfield and squaring his shoulders to his target as he makes the throw:

In this next play against Pittsburgh, Beathard showcases his comfort operating under center and his willingness to stand tall in the face of heavy pressure. His drop back is fluid and natural, and he stays balanced as he separates from the LOS. Moreover, he is able to stick his foot in the ground and make an accurate pass, despite the heavy inside rush. This courage in the pocket will benefit him as he transitions to the NFL:

On the negative side, Beathard often went too far in his willingness to remain in the pocket. Specifically, he showed poor awareness and often failed to sense incoming pressure, which led to him being blasted by pass rushers almost every game. For example, in this play against Miami (Ohio), he holds the ball way too long when performing a simple 3-step drop. As soon as his initial read is not open, he has to be ready to scramble, hit his check down, or throw the ball away. Further, even though the rusher is unblocked off the edge, Beathard has to know that he doesn’t have time to survey the field when he is so close to the line of scrimmage. Hesitation on 3-step drops can be deadly:

Not to beat a dead horse, but this sack against Stanford is another example of how much Beathard struggled with his pocket presence at times. Despite having all day to throw, he needlessly moves up in the pocket and then basically sacks himself by tripping on his own lineman. Plays like this must be eliminated if he wants to make an NFL roster:

Lastly, Beathard was sometimes baited into bad decisions by opportunistic defenders.  For example, here against Stanford, he stares down his receiver and unwisely forces a pass to the flats, leading to a pick-six. Notice how he hesitates before the throw by double-clutching the ball and resetting his feet, which indicates that, at least subconsciously, he knew he was about to make a risky decision.  Although his receiver doesn’t help the situation by rounding his out-route (making it much easier for the defender to undercut the pattern), Beathard still should have never thrown this pass. He threw a nearly identical interception against Pittsburgh as well:

In conclusion, although C.J. Beathard was a capable quarterback within Iowa’s run-first offense and was able to lead the Hawkeyes to a No. 4 national ranking in 2015, I found him to be an uninspiring player overall. He rarely made pro-level throws downfield and his lack of pocket awareness is a major red flag.  His toughness and comfort under center should provide a decent foundation as he tries to acclimate to the professional game; however, I just don’t see enough other positive qualities to indicate that he will become a meaningful contributor on an NFL team.