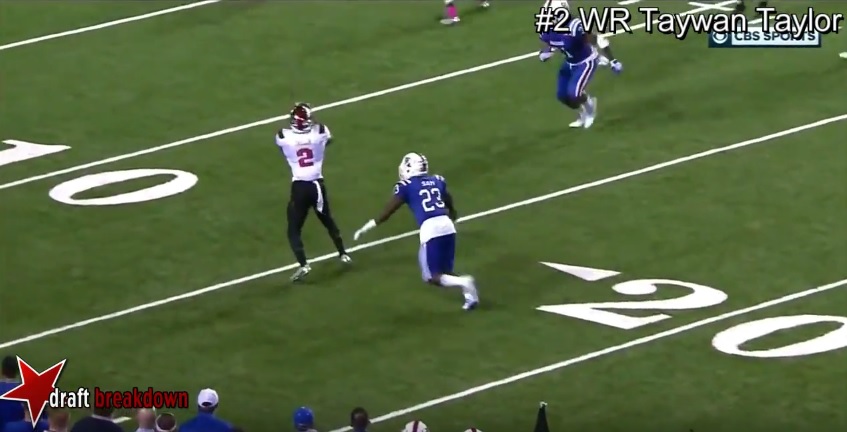 -Runs aggressive routes, rarely taking plays off even if it’s a run
-Changes route tempo often in middle of routes to keep defenders off balance
-Creates great separation at the top of his stem
-Easy runner with plenty of fluidity in hips
-Really explosive lower body that allows him to plant-and-go quickly
-Sinks hips quickly and gets in and out of breaks with impressive precision
-Dynamic runner with the ball in his hands in the open field

-Comes from a simplified offense with plenty of short, easy routes
-Tends to freestyle on routes, working himself open, but leaves QB guessing at times
-Didn’t face a ton of NFL-caliber coverage throughout career at WKU
-Level of competition a concern
-Can get lazy and lean on body catching at times, allowing defenders to work back to the ball

A small school receiver in a high-powered offense, Western Kentucky’s Taywan Taylor really put himself on the map two years ago before firmly entrenching himself as one of the top receivers in the 2017 NFL Draft this past season with the Hilltoppers.

That’s really impressive, especially once you put on the tape and see just how dynamic a receiver he really is.

Granted, a majority of Taylor’s stats came through screens, hitches and crossing routes, but he was a terrific route runner the last two years due to terrific footwork and some impressive lower body explosion in short areas to work open.

Not an overly-technical route runner, Taylor has plenty of room to add to his game as a receiver while cleaning up some of his routes, but he’s a guy that can come in right away in the NFL and thrive out of the slot, despite playing most of the time on the boundary for the Hilltoppers.

As I mentioned earlier, he runs some great routes and really seems to understand tempo in his routes to set up defenders near the top of his stem. Plus, he really sells the flag route with the head fake before exploding back inside to the post.

From there you can see the great hands that Taylor has, making a tough catch like that with the ball thrown high and behind him.

Later on in the game against Rice, Taylor showed off his ability to find an extra route at the top of his stem, allowing him to separate from the defender before then laying out for an incredible hands catch before hitting the turf hard.

It’s rare that you see that type of separate down the field on a simple post route, but what makes this play even more impressive is the catch that Taylor makes going full extension.

His ability to create space is rather impressive, and might be the thing that really sets him apart from other guys in this class with obvious size and speed advantages.

This play is very reminiscent of Antonio Brown in the redzone. It’s a simple route to get up the field into the end zone, giving him a chance to make a play on the ball.

The route is what really sets it up for him, because Taylor is able to get the corner’s weight going towards the middle of the field to defend the in-route, but Taylor is able to transfer weight quickly back to the sideline for the easy score.

Later on in the game, Taylor again goes to work in the redzone for the Hilltoppers.

I love the way Taylor puts his head down, beats the corner to the outside and then whips his head back around to find the ball, allowing him to make a great one-handed catch for the score between two defenders.

That’s some really impressive stuff right there from the C-USA receiver.

While Taylor does have many great traits to fall in love with, he’s rather careless with the ball at times, and a ton of his production came against guys who most likely will never see the field in the NFL.

That has to raise some concerns. However, in the one game he faced an NFL-caliber defense in 2016, Taylor went off for 9 catches and 121 yards against Alabama. He can get open against almost everyone, and he’s going to be a YAC machine in the right system.

He’s a bit undersized, but his work ethic, toughness and explosiveness should allow the Western Kentucky product to carve out a successful career for a contender, as he reminds me of Victor Cruz.