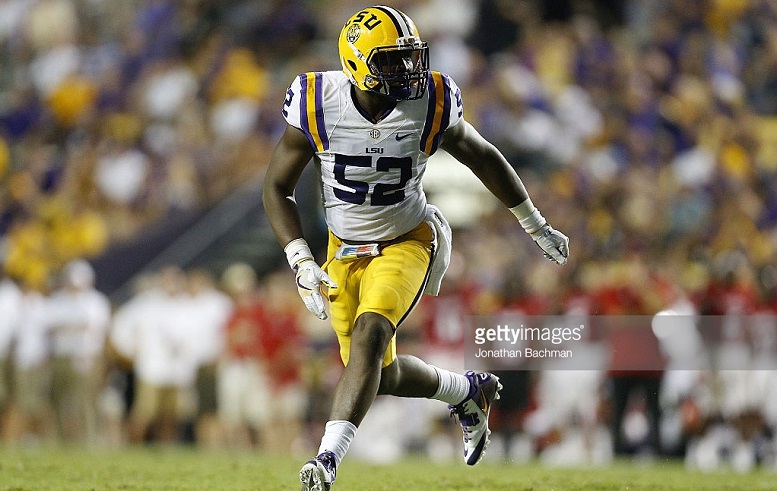 – Able to fight through blockers to navigate to ball carrier
– Quick at attacking the hole to stop running backs in their tracks
– Uses football IQ to gain a first step on runs to the perimeter
– Waits for the offense to show their hand before pursuing, rarely caught out of position
– Physical tackler who plays with a mean streak
– Three-year starter at LSU

A three-year starter at LSU, Kendell Beckwith was the heart and soul of the team’s defense until a catastrophic knee injury ended his senior season prematurely. Officially ruled an ACL tear, Beckwith faces some cloudiness about his recovery timeframe but should he return to form, the team that selects him will be fortunate enough to get their hands on a quality linebacker at a great value.

Beckwith is a tough linebacker who plays with a vicious mean streak. The LSU linebacker is a tone setter whose big hits would go over well in any era of football.

Just as the Mississippi State running back learned, Beckwith has no problem punishing whatever and whoever gets in his path.

But moving on from the highlight reel material and moving into a more technical landscape, Beckwith shows an adequate use of hand work to fight off blockers to navigate his way to the ball carrier.

Against Wisconsin above, Beckwith fights and shreds through two blockers on his way to wrapping up running back Corey Clement. Just as he does above, Beckwith can use his 33” arms to trip up ball carriers from behind, rendering the big play potential obsolete. Beckwith’s smooth and direct path to the ball also cannot be understated as the linebacker has great football IQ which allows him to consistently be in the right position to make a play.

Football IQ is a very important composition of Beckwith’s game as it is the energy source that powers his game. With limited athleticism and a stiff lower half, Beckwith will never be a natural sideline to sideline linebacker but by possessing a better than average football IQ, Beckwith is able to make plays that other linebackers his size can not.

Beckwith keys in to the Wisconsin end around and is able to stop the play for a one yard loss. While the LSU linebacker may never have Ryan Shazier type athleticism, Beckwith uses his instincts to mask his shortcomings exceptionally. Perhaps the most important aspect of Beckwith’s game is his overall understanding of his skill set, as the linebacker is very patient at diagnosing plays instead of charging prematurely and taking the potential risk of getting caught out of position.

Fourth and one is the circumstance that the Wisconsin offense faces on the above play and with it still being early in the game, this is a major opportunity for both sides to set the tone early. Beckwith comes up with the key stop for LSU, diagnosing and keying in on the hand off direction and blockers first rather than crashing the line of scrimmage.

But while the linebacker is generally above the line at being an enforcer around the line of scrimmage, Beckwith does struggle against more shifty and quick ball carriers in space.

Beckwith runs through all his usual motions correctly on the play above; the linebacker keys in on the handoff and seems to have a beat on the Mississippi State running back until – whiff! Beckwith lunges in for the tackle and comes up empty but luckily for the LSU defense, the running back falls into a defensive back only a couple yards again.

It is no secret that Beckwith has a fair share of lower body stiffness and this matter is only complicated by his ACL injury suffered last season. Should the LSU linebacker return to form as he assumes he will, Beckwith could develop into a solid two down linebacker who will likely be asked to be substituted off during passing downs. But while he may not enjoy the liberties of being an every down linebacker like he was at LSU, he still likely has a place in today’s NFL with his football IQ and direct routes to the ball carrier.

Games Watched: vs Auburn, vs Wisconsin, vs Mississippi State (2016), vs University of Southern Mississippi