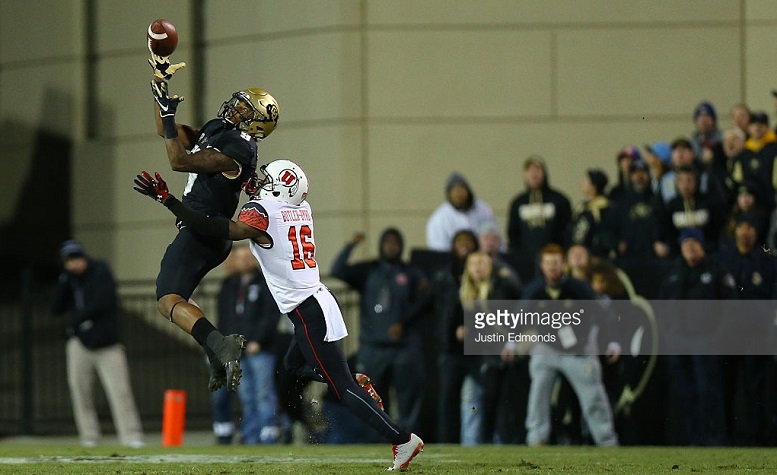 – Hesitant in the box, could be more physical
– Prone to taking bad angles to the ball carrier
– Tries to lunge at target too often
– Not overly fast, game relies on instincts more than athleticism
– Does carry some medical red flags (Major concussion in 2014)

Are you a fan of instinctive ball-hawking safeties? If so, you have come to the right place because Colorado’s Tedric Thompson is an instinctive as they come. Roaming the Colorado secondary for the better portion of four seasons, Thompson has tallied 13 career interceptions and 26 pass defenses.

Watching Thompson on tape, you almost get the sense that the safety can read the quarterback’s mind. In no more than a fraction of a second, Thompson can diagnose where the throw is heading and jump the route. Here is one example against Utah where Thompson knows exactly what is coming and almost comes up with what is surely to be a pick six had he held on.

Rather than eye down the quarterback, Thompson watches the Utah tight end’s hips and footwork and is able to break on the route instantly. Thompson’s game is helped by his own light footwork and ability to quickly transition from his backpedal.

Thompson sniffs out Michigan tight end Jake Butt’s underneath route to the flat on the ball above and is once again milliseconds away from another interception.

Moving from Thompson’s pass defenses to his interceptions gives a closer look at the safety’s ball skills. Mimicking a NBA player grabbing a rebound, Thompson attacks the ball at its highest point and out-reaches those around him.

Now that Thompson’s ball skills have been framed, it’s time to watch it all come together in action.

Thompson’s leaping interception against Stanford is highlight reel material. With the instincts of an elite safety and ball skills of a wide receiver, Thompson has the potential to be a prototypical safety in the NFL.

But before I finish building Thompson’s Hall of Fame bust, there are a few downfalls to the safety’s game that need to be publicized. The Colorado safety lacks physicality in the box and carries a few tackling issues due to his lack of size.

Thompson has a clear path to his target here but choose to launch instead of wrapping up the ball carrier. In truth, it is easy to watch Thompson’s performance against Michigan and write off the safety’s play but by looking at the prospect’s overall film, you begin to see a much more balanced scale.

There are some tasks that Thompson will struggle with when defending the run but there are also a few positives to take away from his overall play in the box. Not much of a one on one tackler, Thompson works best as a reinforcement in run defense. Here below against Stanford, Thompson meets the running back on the outside, forcing the ball carrier back into traffic for a minimal gain.

Thompson will figure to be a cover safety more than a true in the box safety at the next level, with his skill level and ceiling comparable to Patriots free safety Devin McCourty. At 5’10 and 195-pounds, McCourty is a similar size as Thompson and both have shown instinctive playmaking traits from the safety position. But unlike McCourty who was drafted in the first round and quickly inserted into the Patriots’ defense, Thompson will likely be a mid round selection that with more seasoning could easily find his way into a starting role.