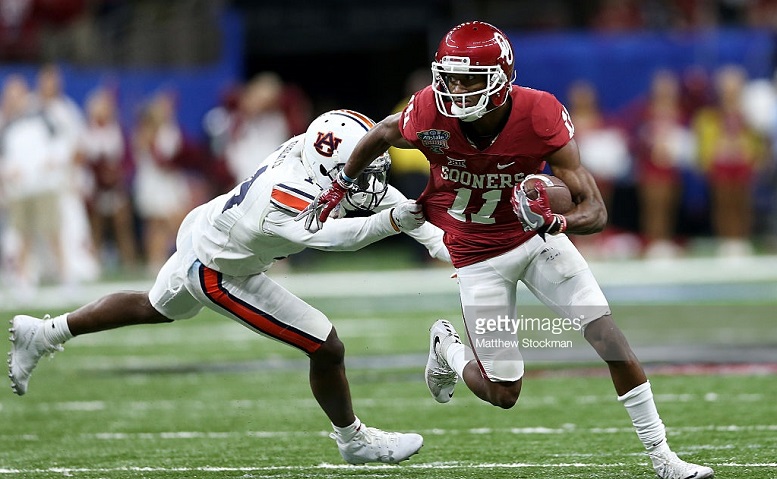 – Lacks significant experiences against press coverage or physical corners; was often given easy, free releases
– Very small and slender build may cause him to struggle against bigger/stronger NFL corners. His size also makes him more susceptible to future injuries
– Rarely faced re-routing defenses and was able to run his patters with little contact. He will have to learn how to recover from being bumped off his path in the NFL
– Non-factor in the blocking game (not necessarily a liability, but also not an asset)

– 2016 Receiving Stats: 13 games, 80 catches, 1,524 yards (19.1 avg.), 17 TDs (single-season school record)
– 2015 Receiving Stats: 13 games, 45 catches, 743 yards (16.2 avg.), 4 TDs
– Blinn Community College Stats: Ranked second in the nation with 76 receptions and led junior college ranks with 1,487 yards and 13 touchdowns in 8 games. Earned NJCAA First-Team All-America honors
– Awards: 4th Place in 2016 Heisman Trophy Voting, 2016 Winner of the Biletnikoff Award (Nations Most Outstanding Receiver), One of four finalists for the 2016 Paul Hornung Award (most versatile player in major college football), 2016 First Team All-American (Associated Press, USA Today, SI.com, SBNation.com), named 2015 Big 12 Offensive Newcomer of the Year by league’s coaches
– 2016: Led all Power 5 players in receiving yards (1,524) and receiving TDs per game (1.31)
– Character Concerns: Westbrook was arrested twice on misdemeanor family violence complaints. In 2012, he was first accused of throwing the mother of his two children to the ground, (the charge was later rejected by the Milam County district attorney). In 2013, he allegedly bit the same woman and struck her with a closed fist, (charges, in that case, were filed by the district attorney, but later dismissed because prosecutors could not locate the woman). – NFL.com Report –

Dede Westbrook was an electrifying playmaker and touchdown machine during his senior season at Oklahoma. He has elite speed and acceleration, as well as an instinctive feel for the game, which made him a big-play threat every time he touched the football. If he can add some weight and adjust to the physicality of the professional game, he has all the other tools required to produce at a high level on Sundays.

This first clip against Iowa State illustrates Westbrook’s fantastic route-running ability. He does a good job of focusing his eyes/body straight downfield and stemming his pattern towards the DB’s outside shoulder (which puts extra stress on the defender to react to any out-breaking routes). He also uses excellent head/shoulder movement to get the DB to commit to the corner-route, before smoothly flipping his hips inside and tracking the ball in the air. Nuanced route-running like this will transfer well to the NFL:

This slant route verse Kansas State is another example of Westbrook’s precise route-running. Notice how he is patient in his stem and deliberately slows his hands and footwork to relax the cornerback. He then explodes out of his cut and snaps his pattern flat, which maximizes space and gives the DB no chance to recover. Additionally, Westbrook showcases his dynamic open-field talent by picking up big yardage after the catch:

Westbrook displays exceptional balance, body control, and core strength in this touchdown against Baylor. Although this play doesn’t need a ton of explanation, it does highlight his overall athleticism:

Here against Texas, Westbrook shows his natural instincts for finding soft spots in zone coverages, as well as his ability to score from anywhere on the field. He does a good job of drifting into the open passing window, before unleashing his elite acceleration on the defense. He also finishes the play with a nice broken tackle:

Lastly, Westbrook’s athleticism made him a quality player in the return game. For example, in this clip against Kansas, he is decisive in his cuts and uses his acceleration to slice through the heart of the coverage. Although he only had one return TD in college, he was always a threat when fielding kicks:

Overall, Dede Westbrook was one of my favorite players to watch and I think he has a bright future in the NFL. He obviously has the speed/acceleration to compete at the professional level and his tactical route-running ability should help when battling aggressive NFL DBs. Although he will have to increase his weight and develop his release skills against press coverage, I think these are correctable issues that do not significantly limit his potential. Moreover, even if he plays exclusively from the slot in the NFL, his field awareness and ability to run a full route-tree still make him a dangerous target.