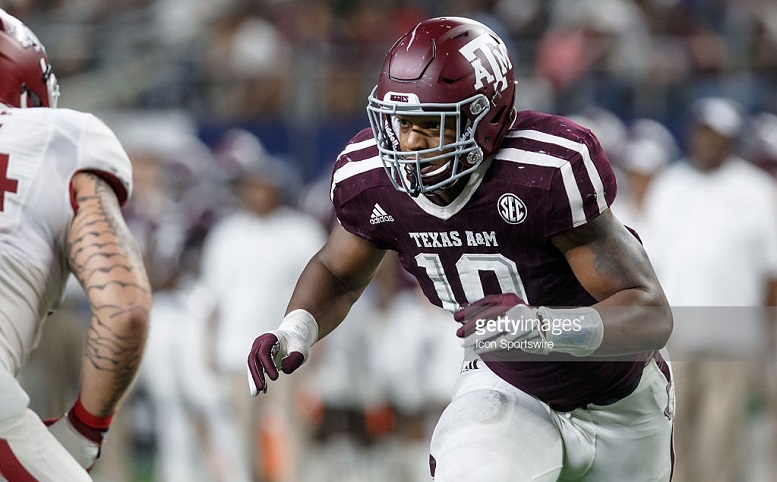 – Currently possesses only one NFL ready pass rush move
– Speed and bend off the edge could improve
– Plays too upright, needs to lower pad level
– Needs to be more physical at setting the edge
– Blocked out of gap control leaving huge hole for running backs to run through

When speaking of the 2017 NFL Draft, Texas A&M will always be associated with producing Myles Garrett but beyond the consensus number one overall pick, the Aggies defense has a few other contributors worth mentioning. Playing on the opposite end of Garrett, Daeshon Hall is another important member of the Texas A&M defense who comes equipped with his own unique assets.

With 35” arms at his disposal, there is no question that Hall passes the written portion of his scouting exam and by viewing his play on the field, the Texas A&M earns a passing grade in the eye exam as well. Hall demonstrates a violent punch that can get him early access into the opposing backfield, a significant reason why he has accumulated 35.5 tackles for a loss during his college career.

Violent shoves and punches make Hall a dangerous intruder in the pocket and though he was a few milliseconds short on the play above, he would not be so unlucky on a second occasion.

With one hand at the Tennessee tackle’s chest, Hall is able to rip inside once the tackle’s hips widen. Hall is also not starting with his hand in the dirt like the prior play, an important gesture that shows that Hall is capable of getting to the quarterback from many different stances.

Just as well as Hall gets into the backfield on passing scenarios, he can power his way through a gap to disrupt the running game. With acceptable burst and strength, Hall is able to beat his opposition into the backfield.

Hall follows his pass rushing roots and dips under the right tackle’s inside shoulder to win leverage into the backfield. This is a technique used frequently by the Texas A&M product and has shown to be quite successful.

It is plays like the ones above that leave the possibility of Hall becoming a 3-4 end a reasonable suggestion. It would make sense to position at player where they can maximize their strengths and shadow their weaknesses and playing Hall as a 3-4 end would do exactly that.

As a pass rusher, Hall lacks a move set to get to the quarterback and not only that, he struggles greatly with setting the edge. Too often Hall finds himself being blocked wide, leaving a hole for running backs to venture through.

Hall simply lacks the strength and physicality to set the edge on his own. To play Hall as an edge rusher would set a very limited ceiling on his potential, as his best efforts at penetrating the running game come with his hand in the dirt. With the long, disruptive arms, all that will be needed for Hall to advance his game to the next step is to add more strength in order to improve his ability at the point of attack.

Games Watched: vs South Carolina, vs Tennessee, vs Auburn, vs Prairie View