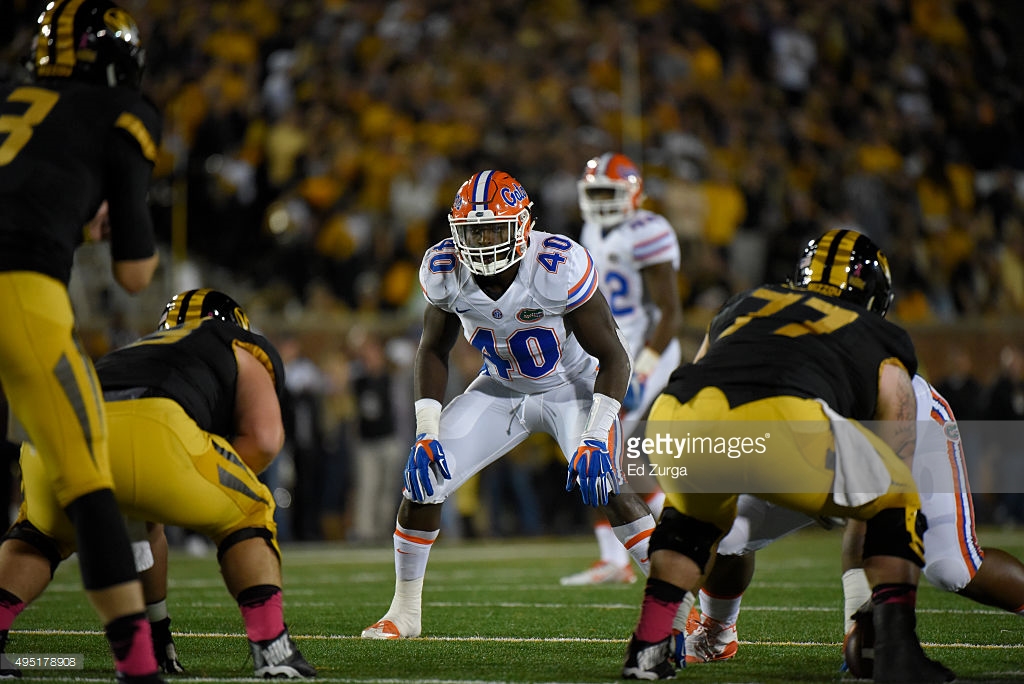 – Good frame and excellent length (33 1/2 arms) for size
– Easy-mover, top level athlete, rangy, sideline to sideline player whose game speed matches test speed (4.58)
– Heavy hands and strong punch against the run, initiates contact against OL and hand use to shed blocks, run fits are really strong
– Shows good technique against the run, stays square vs the run and uses leverage well, especially when taking on pullers on gap schemes
– Generally does well in coverage, able to carry the seam against #3 or the Y, and does well to stay in-phase and shows ability to locate the football to make a play on it
– High effort player, doesn’t loaf, and a physical tackler, especially in space
– Does well on zone spot drops with good feel for WRs routes and ability to close windows
– Limited use as a pass rusher but first step is an asset and shows a rip move

– Not the biggest or strongest, lacks some upper body strength, and can get washed by big, powerful guards or tackles who are able to get square and get into his pad level
– Also causes some issues wrapping up and finishing plays against bigger backs
– A bit predictable but struggled more v top flight competition (Alabama, LSU) and excelled against lower teams (Kentucky, Vanderbilt)
– Eyes match feet most of the time but occasionally loses sight of the football and is late to react, hard to pin down exact issue
– Injury concerns and struggled to stay healthy on a consistent basis throughout his career, minor ones that added up over time
– Starting experience is a bit below average because of injuries

Want to find the next Lawrence Timmons? You found him – it’s Jarrad Davis. And Davis may be even more athletic. He’s an excellent athlete, showing sideline-to-sideline range and the ability to carry receivers and tight ends down the seam.

His 15 tackle performance against Vanderbilt is one of the best individual games I’ve watched from anyone in this year’s draft. He showed the ability to cover the seam and run step-for-step downfield. 3rd and long? You’re going to want someone who can match and carry? Perfect example here.

Or here, undercutting this out route by the tight end and nearly – probably should’ve, really – come away with the interception.

You can’t expect him to run with a WR on some of the fire zones, though that’s going to happen sometimes just based on the offense’s route tree, but he can match up against pretty much any WR or RB in the league. On paper, at least.

That athleticism shows sideline-to-sideline too, where Timmons was still strong even in 2016.

Davis’ first step and length helps him with a strong punch that can win the POA when he’s able to initiate contact. It helps mitigate the lack of side and upper body strength. Watch LT Cam Robinson, one of the top tackles in the draft, get knocked back by Davis.

But when he can’t, or he’s catching the OL, he will struggle because his upper body strength is only average. He’s not a particularly huge dude. Man blocking schemes and big guards or tackles can give him problems, even if they’re not great linemen overall, like Vadal Alexander in 2015.

He’s the RILB, getting pushed upfield across the 35 yard line in the clip before – #40.

There are the injury concerns though honestly, it might be overstated, which I’ve described above. But Davis did say the medical check-up at the Combine was “rough,” which could just be a general statement because yeah, getting poked and prodded by half the league sucks.

I’ve been a big proponent of Vince Williams, and still am of course, but Davis is seriously the next Timmons. And there is no question Davis is a significantly better athlete than Williams, someone who can play on third down and minimize the need for that hybrid player. It’s a heavy investment, and I’m not saying they should do it, they’re bigger needs elsewhere, but I’m confident Davis is going to be a starter for the long-haul. And there’s never a bad direction to go.