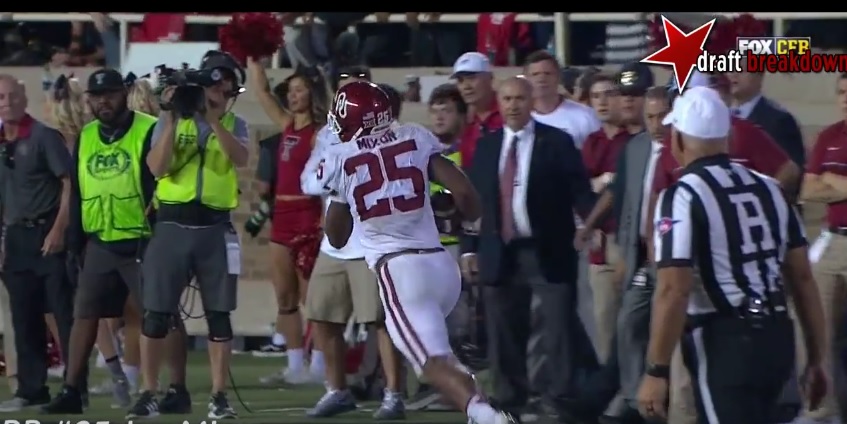 -Powerful, balanced runner that thrives in zone scheme
-Patient runner that lets holes develop
-Has some shiftiness to his game and can make defenders miss
-Great route runner with excellent hands out of the backfield
-Extremely young for a prospect; won’t turn 21 until July 24
-Impressive initial quickness laterally for runner

-A bit careless with the football as a runner
-Fumbled six times in two seasons as a Sooner
-Runs with a high pad level, leaving him prone to some big shots
-Serious character concerns due to his heinous incident punching a female in 2014
-Can be too patient at times as a runner and has some vision issues with cutback lanes

-2016 First Team All-Big 12
-Set single-season Oklahoma records for all-purpose yards (2,331) and yards per game (194.3)
-Played in 25 career games, started just 9 career games
-Rushed for 2,027 yards and 17 touchdowns in two seasons at Oklahoma (6.8 yards per carry)
-Hauled in 65 career receptions for 894 yards and 9 touchdowns.
-Served a season-long suspension in 2014 for punching a female; tape of incident emerged in mid-December

There’s no doubt in my mind that Oklahoma running back Joe Mixon is one of the most dynamic dual-threat running backs in the 2017 NFL Draft class just based off of his tape and career stats with the Sooners.

But with Mixon, there’s so much more to the story that is being written about his NFL Draft prospects this April.

On the field there are very few running backs that are on the same level as Mixon, but off the field the redshirt sophomore is a serious character concern, considering he was suspended for the entire season in 2014 for striking a woman. The incident was caught on tape and was later released to the public in mid-December.

My personal belief regarding Mixon is that he should never play in the NFL. Let him go to the Canadian Football League or the Arena Football League. There’s no excuse for hitting a woman in any situation.

That being said though, Mixon likely winds up in the NFL and will probably have a long, successful career under the protection of the shield.

As a player, he’s without a doubt worthy of being a superstar in this league, but as a player he’s not even close.

Maybe that has to do with him being so young and largely immature, so we’ll see. But if the league was so serious about punishing domestic violence criminals, Mixon wouldn’t have a place in the league.

But for the intent of this exercise, we’ll stick with Mixon the player, which is largely what my projection (grade) is all about at the end of this article.

As a running back, Mixon has a ton of Le’Veon Bell to his game, whether it’s the lateral agility, the patience to let holes open up and the shiftiness to make defenders miss.

On this play against Texas Tech in 2015, Mixon shows the ability to make a defender miss in the backfield, before showing the burst to get into the secondary.

From there, Mixon showcases his power for his size by lowering his shoulder to bowl into the end zone for the score.

He’s a very smooth runner for his size and makes it look mostly effortless.

A big question mark surrounding Mixon on the field is his ability to hit the homerun consistently at the next level, but more often than not I saw the breakaway speed to bust games wide open.

Not only is Mixon able to remain upright in the beginning of this run while shedding a would-be Baylor tackler, he’s able to turn on the jets almost as soon as the defender is off of him, allowing him to hit the seam between the Baylor defenders for the house call.

He might look like a big, physical back, but Mixon has some serious afterburners for his size.

Mixon gears down behind the line of scrimmage, and nearly comes to a complete stop before putting his foot in the ground to explode through a lane he sees off to his right.

Patience as a runner is a big part of his game, so that’s where a lot of the comparisons to Bell come from. Based on plays like this, it’s definitely warranted and it’s the type of high-end talent that Mixon is — and could be — at the next level.

Outside of being a dynamic running back, Mixon is arguably the best receiver out of the backfield in this draft class, right there with Stanford’s Christian McCaffrey.

This is a simple flare route out of the backfield, but good lord that is an impressive play by Mixon.

It first stats with the one-handed catch by him out of the backfield that he makes look relatively easy and natural, but from there he turns on the jets and shows off some great balance at the end of the run to stay inbounds for the score.

He’s a natural athlete that is extremely smooth with the ball in his hands. He’ll likely be the 6th or 7th running back drafted in this class, but even that’s a bargain, considering his on-field talent.

Without the domestic violence incident from 2014, Mixon is easily a top 15 pick in this class.  But there’s no chance he’ll go in the first round this year.

I think he’s more of a Matt Forte clone than a version of Bell, but both were game changers at the position. Mixon can be too.