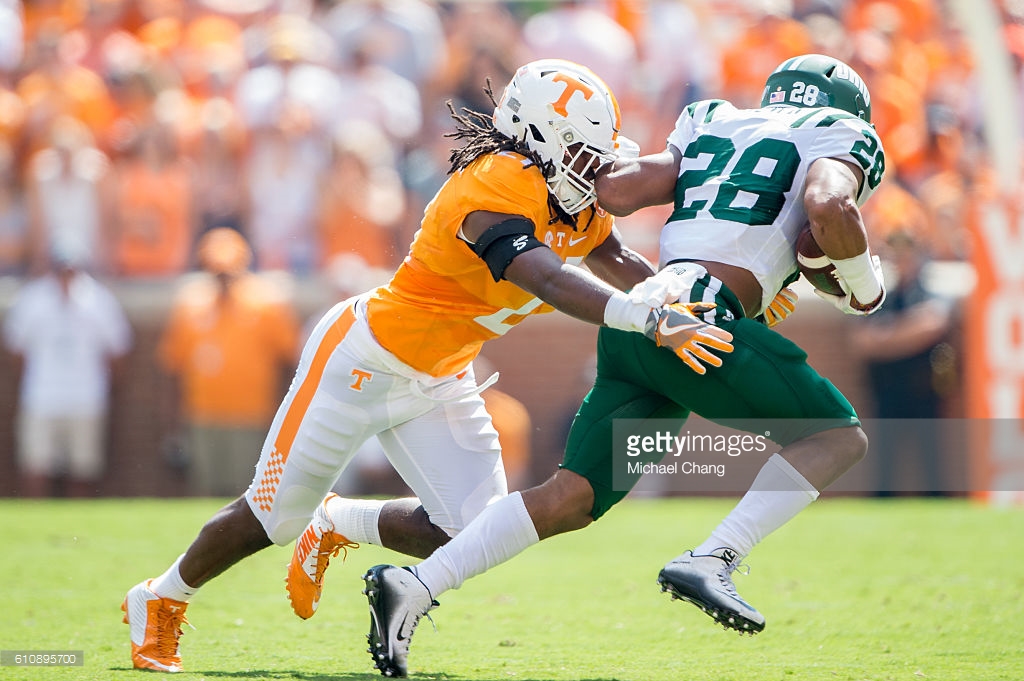 – Good length (32 1/4 inch arms) for below average size
– Quality athlete with sideline to sideline range
– Impact hitter, physical and aggressive demeanor who looks to finish plays
– High football IQ who diagnoses play quickly with athleticism to penetrate and speed to close the gap
– Capable in coverage, gets to window in spot drop quickly and shows physicality to reroute receivers who pass through and the active eyes to find the man who is in his zone
– Good effort player, no loafs and maximizes opportunity
– Experience playing in space and detached from the box
– Productive when healthy

– Below average height and likely will need to add some weight in the NFL (5-10 pounds)
– Tends to play out of control and reckless
– On the ground too often in the run game
– Needs to be able to finish his plays when aggressive and penetrating, trouble wrapping up the tackle
– Can get outleveraged in the run game when guards and centers reach him cleanly, able to stay square to the block but lacking some upper body strength
– Struggles in man coverage more than he does zone
– Missed most of 2016 with injury, serious medical concerns

– 30 career starts for the Vols
– Career: 240 tackles, 27 TFL, 8 sacks, 1 INT
– 2016: 20 tackles, 2 TFL (four games)
– Senior season cut short by left shoulder/bicep injury
– Had reportedly at least three surgeries on shoulder, beginning in spring of 2016
– Had 21 tackles vs Vanderbilt in 2015, most by any player that year
– Split time freshmen season as a linebacker and safety before making full-time move to LB sophomore season

Had Reeves-Maybin been able to stay healthy, you’d be hearing about his name a lot more. It’s unfortunate because he deserves the press. But that makes him a value pick on Day Three. Let’s find out why.

He is undersized but makes up for it with his IQ, athleticism, and physicality. This play sums it up well. The effort, the athleticism to close, and finishing the tackle. Reeves-Maybin goes all out on every snap and maximizes his athletic profile, a very good combination.

But he’s also a physical player too who uses his acceleration and ability to close to pack quite a punch.

Shows a good football IQ who snuffs out screens and run schemes. Similar to Tyler Matakevich but way more athletic.

But because of his take-no-prisoners mentality, he can play out of control. Either by being unable to make the tackle, getting fooled by some false key by the offense, or getting off his feet. Never going to make a tackle from the ground in the NFL, even if he could get away with it at college.

This is probably reading a good bit like Ryan Shazier’s scouting report and if you are, I’d tend to agree. Not saying he’s ever going to be on that level but it’s not impossible and they have similar strengths and weaknesses. Undersized but hyper-athletes with the ability to rush the pass rusher too. Going to go higher than expected right now.