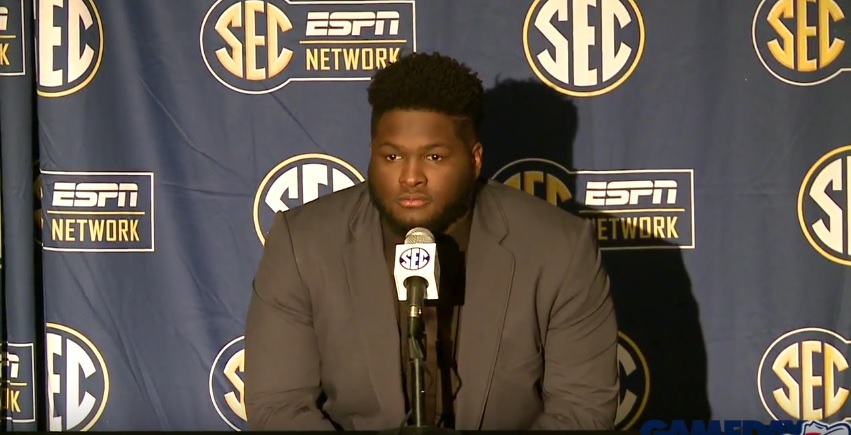 – Nose tackle size with good arm length and hand size relative to frame (32 1/2 arms, 10 1/4 hands)
– Tested exceptionally well for his size/makeup, great 40 time and ten split (5.04/1.76), and testing matches game tape
– Strong at the POA, keeps his feet moving, and shows the ability to take on double-teams
– High motor, effort player willing to chase the ball downfield and across the LOS away from him
– Nimble feet for a big man
– Good IQ who recognizes screens and allows him to make plays in space
– Plays with proper hand placement, leverage, and gets arms extended to create space
– Good production given role/usage

– Not a playmaker, won’t offer much as a penetrator, two-gap nose tackle at the next level
– Inconsistent vs the run, prone to dropping his eyes and causes him to get turned/washed at the line of scrimmage
– On the ground too much and has to stay on his feet to be successful
– Limited pass rusher who works hard but is too often stuck one on one and doesn’t have a go-to move, bull rush is underwhelming and quickly loses steam
– Upside probably limited
– Didn’t appear to be an every down
– Not much starting experience and only two years of Division One football

You think of a two-gapping nose tackle as non-athletes but Jones breaks that mold. He tested extremely well, as I wrote above. He’s got light feet for such a big, squatty fella and I love his effort. Always running to the ball and that’ll certainly endear himself to John Mitchell.

This is one of my favorite players of him. Not going to see many big uglies read this tunnel screen to Calvin Ridley and tackle him in the open field. That’s what Jones, #93, does.

When playing with his eyes up and good technique, he’s country strong and tough to move. Capable of taking on double-teams because of his low center of mass, similar to Javon Hargrave and probably even better, to be honest.

I don’t think I have to show you any clips of a 319 pound nose tackle isn’t a great pass rusher. I’d rather focus on the run game, where he is inconsistent and has to keep his eyes up. Have seen him get turned and washed and even knowing getting double-teamed in the SEC isn’t always pretty, it’s an area to work on. After all, he was a one year full-time starter and still has a lot to learn.

Nose tackle certainly is not a huge need for the Steelers but I wouldn’t be mad about the team burning a late round pick to push Daniel McCullers and maybe getting him off the roster for good. Jones is definitely one of the guys I’m targeting as that player. He’s a more traditional nose tackle, sorta like McCullers, and has some good tape. Like his tape for Day Three.