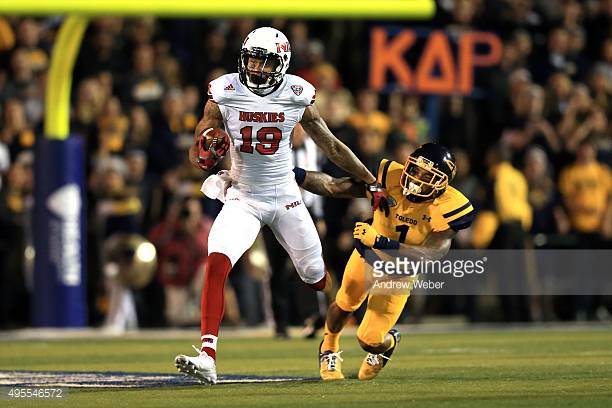 -Ideal height, weight and length for position
-Willing blocker with want-to to be physical in that area
-Uses hands well to create separation at line of scrimmage, allowing him to get into his routes
-Chews up a ton of ground on routes with long strides
-Big catch radius thanks to 32-inch arms

-Started collegiate career at North Dakota before transferring to Northern Illinois
-Sat out entire 2014 season due to transfer
-2016 First Team All-MAC selection
-Finished his career ranked sixth all-time at NIU in catches (160), fifth in receiving yards (2,285) and tied for eighth (18) in touchdown catches.
-Totaled seven 100-yard receiving games and accumulated 90 or more receiving yards in 12 career games with Huskies
-18 touchdown catches came in 13 games, or half of those played for NIU
-Started 24 games the last two seasons

Big and fast with some impressive career stats, Northern Illinois’s Kenny Golladay seems to be the next mid-to-late round receiver that could surprise people in the NFL.

Standing 6’4” and weight just south of 220 pounds, Golladay has the ideal body type for receiver in the NFL. Despite weighing just 218 pounds, the Northern Illinois product has plenty of room on his frame to add weight, allowing him to withstand the rigors of the NFL.

After transferring from North Dakota after the 2013 season, Golladay had no problem adjusting to a higher level of competition while with the Huskies, putting up some impressive numbers in two seasons at Northern Illinois.

That being said though, there’s still plenty of issues with his game despite the eye-popping stats.

For starters, he really struggles to win 50/50 balls despite standing tall above defenders that try to cover him, and he’s a guy that can be pushed around physically against corners that like to get handsy and establish the dominance in the matchup.

That leads me to believe that he’d be much better off working in the slot, which is strange for a guy who is 6-foot-4.

But with his size and speed, he’s able to get deep on teams, largely due to the amount of ground he’s able to chew up thanks to his long strides.

Right from the snap, Golladay has the defensive back beat, simply by being able to outrun him down the left sideline for the perfectly placed deep ball by the Northern Illinois quarterback.

At the very top of Golladay’s stem in the clip above, you can see the big receive create enough separation, simply by pulling way.

That’s impressive stuff right there from a guy his size.

When not serving as a deep threat down the field, Golladay is a challenge for defenders to cover in one-on-one situations due to his size and catch radius.

As I mentioned earlier, he really struggles to win 50/50 balls, but when he does win them, they often come in spectacular fashion.

Just look at that one-handed catch on a fade route near the back of the end zone.

As you can see in the clip, his eyes follow the ball all the way into his hand, allowing him to come up with the amazing catch while still being able to get his foot down in the end zone for the score.

With his size and wingspan, there’s no reason he shouldn’t be able to make catches like this. I’m sure this play — and the endless possibilities that come with it due to his size and reach — have NFL staffs drooling.

One thing Northern Illinois did well with Golladay was getting him the ball in space as a runner, allowing him churn up yards in bunches with his long strides.

But despite eating up a ton of yards, I wasn’t expecting Golladay to be willing to lower his shoulder and punish a defensive back in his way.

Golladay leaves that Toledo defensive back a bit dazed after the play thanks to a big blow at the end of the run. Although Golladay isn’t able to bounce off the hit and keep running, this type of play will go over well with teammates at the next level because he’s willing to be physical and fight for extra yards.

However, his willingness to fight for extra yardage can come back to haunt him at times.

Golladay does everything well here on this play, right until the very end of it.

He makes a great hands grab coming across the middle on a strong throw from the QB, and from there he’s able to stiff-arm a defender away to keep running. But once the second defender closes in he struggles with ball security, resulting in a fumble at the end of a big run-and-catch.

Overall, with his size and catch radius, as well as his 4.5 40 speed, he’s a guy who could (and should) go in the middle rounds of the draft, allowing him to sit and develop for a year at the next level.

If he can expand his route tree and become more physical on 50/50 balls, he’ll be a tough player to cover on a weekly basis in the NFL.