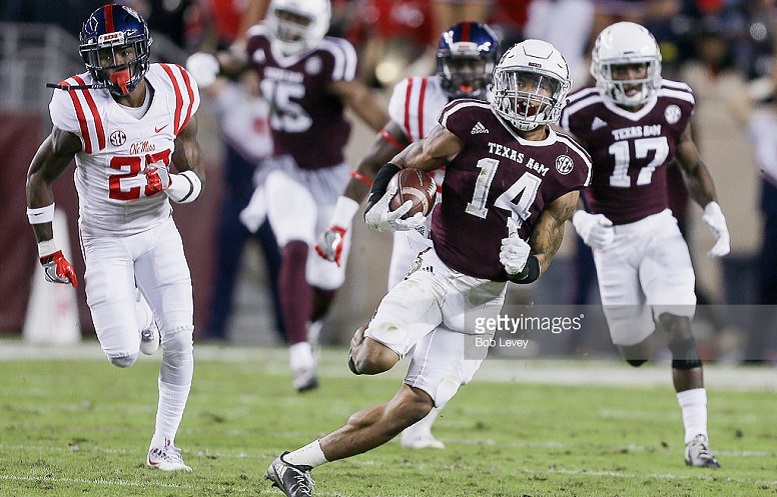 – Plays the ball as well as a receiver would aka catching it at highest point, skying above other players with soft hands.
– Likes to mix it up physically and doesn’t shy away from contact.
– My ball mentality”
– Solid wrap up tackler, when he takes the time to get in front of the ball carrier.
– Usually plays about eight yards off the line of scrimmage, but can play tight near the goal line and short yardage situations.
– Very athletic, good center of gravity, and can reverse directions well while tracking the ball.
– Huge range, closes quickly finding the ball, rarely gets called for pass interference as he always is playing the pigskin.
– Strong kickoff returner, which can save a roster spot

– Can get overly aggressive making a play on the ball, taking bad angle gambles
– Focuses well on the receiver or the ball, but has issues concentrating on both
– Smaller athlete for his physical style of play
– Leaves his feet too often trying to make the tackle
– Doesn’t disengage quickly from blockers
– Lack of power needed to bring down bigger ball carriers in 1 on 1 situations

– Excellent pitcher, receiver, and defensive back in high school
– Played his freshman and sophomore football seasons at Mississippi Gulf Coast Community College
– Finished with 185 career solo tackles, 29 passes defended, 11 interceptions with 2 returned for touchdowns, 17 kickoff returns for 474 yards (27.9 yard average)
– Playing in the NFL was a lifelong dream for him

With the ball just outside the 5 yard line, the defensive back walks up close to the line of scrimmage like a linebacker. Evans reads the blockers, fills the hole, meeting #34, wrapping him up while driving him back and prevents a first down conversion.

Evans lines up 13 yards away from the ball on the strong side. He quickly reads the signal caller’s eyes, identifies the target #82, and flies immediately towards the intended target. The safety arrives just as the ball does, striking the receiver with his shoulder pads; this hard hit bags the wideout, but also shakes up Evans in the process.

The safety lines up 10 yards across from the inside on-line receiver. Evans drops back into zone at the snap of the ball. He sees the ball get tipped by the UCLA wideout, tracks the ricocheted pigskin while contorting his body to make the interception in the redzone, preventing a scoring opportunity for the Bruins.

Evans lines up 8 yards from the line. Watches the quarterback’s eyes light up as the wingback runs his route into the flat. The athletic safety breaks quickly into the flat stopping the wingback for a short gain.

The defender is quite reckless at times in pursuit of the ball, sometimes even outright ignoring the intended target. The former Aggie safety has great ball skills, but gambles a bit too much for my taste. Unlike when Steeler great Troy Polamalu took chances, Evans doesn’t have the elite athletic skills to recover from his mistakes. If he can improve his tackling, the young man could be one of the better safeties in the league. Being more of a free safety than a strong safety might hurt his chances of becoming a Steeler, especially with his Day Two price tag. His versatility to also return kickoffs could make him a very exciting player to watch.

Games Watched: vs. UCLA, vs. Tennessee, @ Alabama, vs. LSU