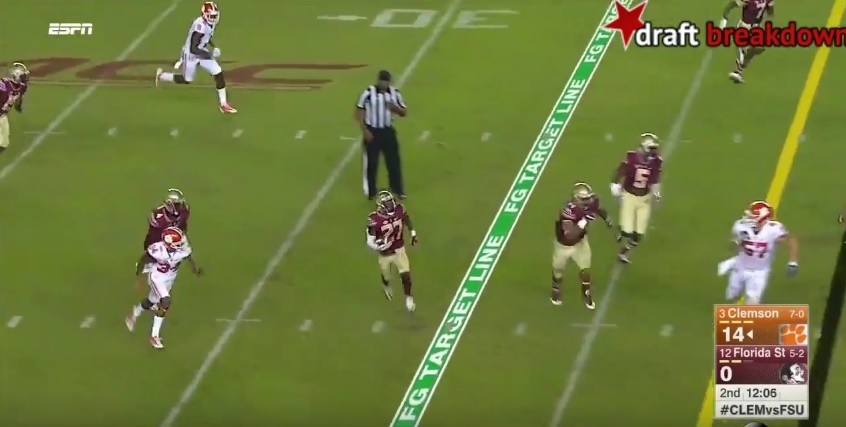 – Long, lean frame with excellent length relative to his height (32 1/8 arms, 10 inch hands)
– Physical, aggressive player overall who certainly plays with chip on his shoulder
– Best work comes in press alignment, does a good job of jamming WR and disrupting the timing of the route
– Willing tackler, sets the edge in the run game, and closes downhill well to finish the play, gets off blocks in the run game
– Experience playing in space, normally operated as the team’s field side corner
– Used on blitzes
– Durable career, didn’t miss time

– Long speed is big question mark and loses man at the top of his route, will be challenged vertically
– Far too grabby in man coverage, has to play cleaner and at this point, will draw too many penalties
– Needs to work on footwork and punch in press coverage, get his hips open and not get off balanced changing directions to WR release
– Seems like a willing tackler but had very low numbers as a tackler in his career
– Lack of production overall
– Tall in pedal

White is the long, lean looking corner we’ve highlighted quite a bit over the past two weeks and it’s actually surprising he’s under the six-foot barrier, to me at least. But he has exceptional length for his height and does his best work in press man.

Unlike some of the other corners we’ve profiled, he’ll come up and hit you.

He’s super-aggressive and is the definition of “chip on his shoulder.” It can get him in trouble but as Mike Tomlin will say, better to say whoa than sick ‘em. This play shows both. No prisoner mentality on the receiver, or the woman he ends up trucking, but he gets penalized for it.

Penalties is sorta of a theme with White. I watched just three games of him, felt that was enough after watching him for the whole week of the Senior Bowl, and he had three penalties. Too grabby in coverage, even worse than Cordrea Tankersley, and he has to learn to play clean if he wants to be a press corner.

There’s also justifiable questions about his long speed after running 4.59 at the Combine. That might not be good enough if he wants to be on an island.

No matter how you slice it, I think White is a project. The good news is that there is a reward here because the NFL covets long, aggressive corners. The lack of speed and playmaking ability, two key baseline areas to look at, are concerns. He’s significantly shorter but I think his ceiling is Brandon Browner. They tested pretty similarly.