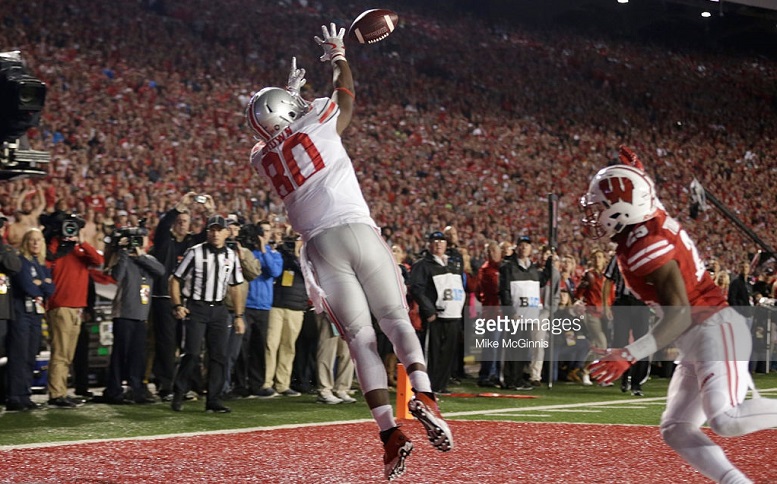 – Physical, powerful run blocker and even a better crack blocker
– Uses his body to shield the ball, attacks the pigskin regardless of contact aka he loves 50/50 contested catches
– Big red zone threat with an even bigger catch radius
– Doesn’t let the defender get between him and the ball, it’s his
– Fully extends himself to make difficult catches
– Hard to bring down with only one defender

– Very limited experience with only 33 receptions on 52 targets in 2 years
– Tips off routes by slowing down early
– Lapses of concentration
– Will need time to work on refining his route running
– Heavy footed, getting in and out of breaks
– Comes from a run-first offense
– 4 of his 7 touchdowns came in his game against Oklahoma and his highest receiving total (72 yards) also came in that same game

– Broke his leg during practice in 2015 and was red-shirted because of it.
– Honorable mention All Big Ten in 2016.
– Four star rating and was considered the #9 rated “athlete” by Rivals in high school.
– First team All-New Jersey as a high school senior with 1363 rushing/receiving yards and scored 21 touchdowns.
– Only played two years with the Buckeyes. Career statistics are 33 catches for 411 yards with 7 touchdowns, 1 carry for -4 yards, and 1 kickoff return for 23 yards.

The outside receiver gets a good release off the line of scrimmage, uses his hands to create a sliver of separation between himself and the cornerback. Brown tracks the ball well in the air, keeping his feet inside the endzone, and makes the contested touchdown reception.

Brown lines up on the outside in the red zone with single off coverage. The wideout runs straight at his corner, which causes the DB to bite. This allows the Buckeye receiver to use his quick feet to jumpcut around the defender. Brown attacks the pigskin for the easy TD.

Facing off coverage, Brown uses his speed and double moves to get behind the cornerback, creating separation while tracking the ball in the air. The receiver is so focused on the pigskin that he catches the ball with the DB on top of him (facing him) hugging it while staying in bounds for the score!

The wideout lined up on the outside on a first and goal to go at the nine yard line. Brown sells a route with a deep step to freeze his corner, then sprints down towards the safety to crack block him out of the play. This opens up an outside lane and allows the former Buckeye a chance to show off his blocking skills.

The redshirt sophomore does not have ideal college statistics with only 33 receptions on 52 targets in two college seasons (missed all of 2015 due to a broken leg). He did not run at the NFL Combine, but ran a better than average 4.55 40-yard dash for a wideout his size at his pro day in Columbus. Brown loves to block and/or manhandle opponents. The former Buckeye is not an accomplished route runner and has a lot to learn about being a receiver at the next level. The athletic talent is there to work with, on the right team. If Brown is there in the fifth round or later, he should be considered by the Steelers.