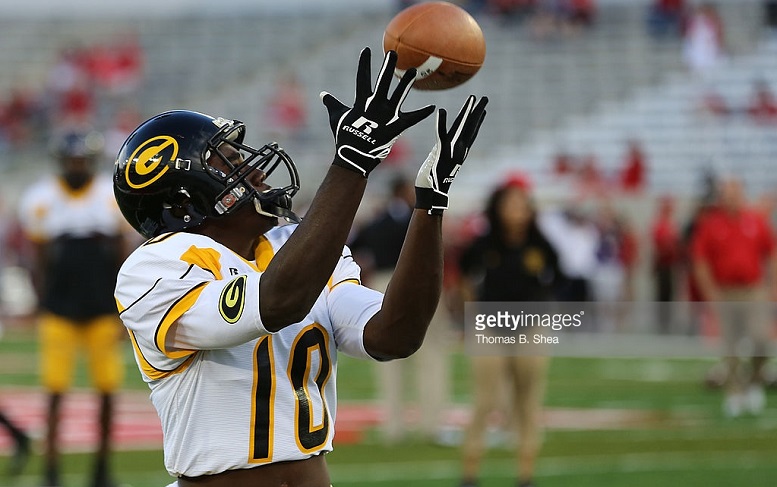 – Catches the ball away from his body
– Uses his body to shield defenders away from the ball, likes to play physical
– Red zone threat that can sky high for the ball
– Decent run blocker, engages and keeps on blocking until runner has past him
– Can contort his body to make difficult high flying receptions
– Fights for extra yardage, spinning or jumping for that little extra
– Improved his statistics every year with 7- 100 yard receiving games in 2016

– Long strider, who can take too long to accelerate
– Stiff lower body that prevents him from changing directions quickly
– Played against lower level of competition
– Shows some laziness when the ball or play not going to his direction
– Character concerns which caused him to not invited to NFL Combine

– Got charged with possessing both marijuana and firearms while in his car at LSU right before his senior year
– Second team FCS All-American
– 2017 Senior Bowl participant
– Completed one pass for a 32 yard touchdown his senior year against Southern University
– Finished his college career with 47 games played, 210 receptions for 3062 yards and 28 touchdowns, 10 rushes for 53 yards and a rushing touchdown
– Received some pointers from former NFL WR Torry Holt

The receiver lined up on the outside in the red zone, takes his time getting off the line of scrimmage while watching his corner drop back into coverage. Williams tracks where the pigskin is headed, snares it at its highest point away from the defensive back. He juggles the ball while getting both feet in bounds. This was originally ruled a touchdown, but after review Williams could not control the ball to the ground.

Williams gets lined up outside to the right and explodes off the line without being touched. He quickly makes his way deep into the middle of the field where the wide out catches the ball without breaking stride for a smooth 45 yard gain.

Starts off lined up on the outside. Comes off the line quickly, runs his hook route between three defenders and gets clotheslined. Yet the receiver holds onto the ball and runs back to the huddle showing his toughness against a more seasoned Arizona team.

Once again the Grambling State receiver lined up on the far left with a big cushion in front of him. He makes the catch 9 yards downfield, but his cornerback tries to tackle him high. Williams throws the CB to the ground and tries to fool the closing safety by high-stepping down the sidelines. The receiver runs through the safety with a nice shoulder block for an impressive 29-yard conversion on a 2nd and 15 yard play.

Williams has increased his receptions, yardage, and touchdowns in all four seasons at Grambling State. The former Tiger is a physical player who can play all three downs, helping in the run game. He is quick in a straight-line, but can’t out-maneuver many defensive backs. His off-field issues are somewhat troubling, but I think he is a better talent than current Steeler Cobi Hamilton. If Pittsburgh wants to take a flier on a troubled wide out however, I would rather them get the more talented Ishmael Zamora, who I profiled before Williams.

Projection: Sixth or seventh round