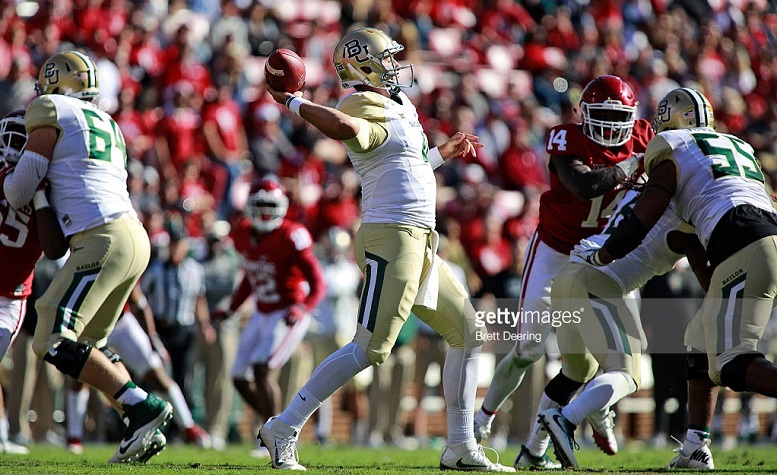 – Relaxed and Balanced playing style; never seemed to panic during a play
– Underrated Athleticism: often extended plays behind the LOS and could pick up yards on the ground
– Generally had good touch on deep passes, especially on verticals down the sidelines
– Showed decent running instincts and field vision (on run-plays)
– Performed his responsibilities well within Baylor’s spread offense and had good overall statistical production

– Struggled under pressure – Ranks last in the 2017 Draft Class in Adjusted Completion Percentage on Under Pressure passes (Pro Football Focus)
– Injury History: Suffered a season ending neck injury in 2015, and a season ending ankle injury in 2016
– Played in Baylor’s simplistic, matchup-based offense; will need time to adjust to the more sophisticated professional systems.
– Never took snaps under center or called plays in a huddle
– System QB who sometimes got too locked-in to a particular receiver and relied too heavily on pre-snap reads
– Has a slightly elongated throwing motion; the ball get away from his body at times
– Needs to slide on running plays
– Played against fairly weak competition

Although Seth Russell showed decent athleticism and an ability to throw a nice deep ball, he still has a long way to go before he can contribute to an NFL team. He currently lacks experience with pro-style passing concepts and often struggled to make good decisions when his initial read was covered. Moreover, learning many of the basic elements of a professional offense, such as dropping from under center and calling plays from a huddle, represent additional challenges he must overcome at the next level.

The best feature of Russell’s game is his ability to hit receivers in-stride on deep vertical routes. He consistently took advantage of mismatches and often delivered perfect strikes down the sidelines. For example, this type of throw seemed to reoccur at least once every game:

Russell’s mobility is also a positive aspect of his overall skill set.  Although his 6’3” frame causes him to accelerate slowly and gives him a slightly lumbering style, he was still able to keep plays alive behind the line of scrimmage and pick up yards when his receivers were covered. Additionally, Russell displayed good escapability when navigating the pocket or avoiding unblocked pass rushers. This 65-yard touchdown run against Southern Methodist is an example of his underrated speed and athleticism:

On the negative side, Russell could sometimes get locked on a particular receiver or rely too heavily on his pre-snap reads. For example, in this play against Kansas, he recognizes the defense’s Cover 2 before the snap and identifies the middle of the field as a weak point. He then preselects his slot receiver’s seam route as his most favorable match-up, and blindly throws that direction after performing an unconvincing, token “look-off.” Instead of adapting to defense’s post-snap alignment, Russell robotically follows his pre-snap read, which nearly results in a red zone interception:

Lastly, this play against Lamar illustrates Russell’s inconsistent decision-making and his occasional lapses in field vision.  He fails to perceive the trailing DB and unwisely decides to throw, across his body, deep downfield. This is just one of four total turnovers that Russell personally committed against Lamar, (he also had at least three additional passes that were interceptable). His knowledge of defensive schemes, as well as awareness of defenders trying to bait him into throws, needs to improve in the NFL:

Overall, Seth Russell has several of the raw physical tools required to succeed on Sundays; however, his current lack of refinement in the nuances of the quarterback position limit his pro potential.  He needs to develop a better ability to manipulate defenses with his eyes/head/shoulders and must improve his general decision-making if he wants to survive in the NFL. Consequently, he will likely encounter a major learning curve as he transitions to the professional game.