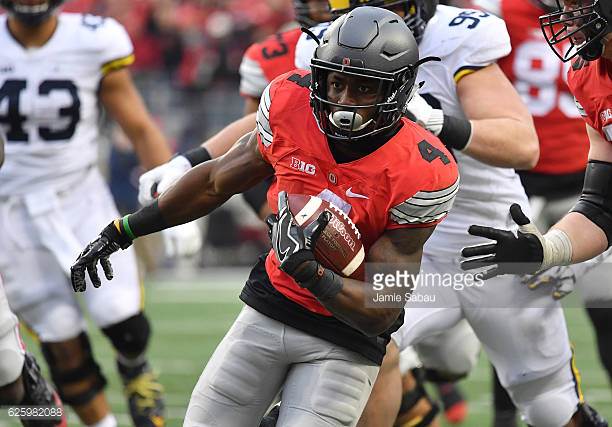 -Quick lateral movements that allows him to turn the corner on defenses in a hurry
-Fluid, explosive lower half
-Above-average route runner that has a knack for finding openings in defense
-Creates good separation at top of stem and explodes out of breaks with consistency
-Great stop/start ability in the open field to throw defenders off
-Big play threat with the ball in his hands

-Not a natural hands catcher; tends to default to body catches too much
-Limited physicality as a runner; won’t lower shoulder on you often
-Had to have touches manufactured for him, with most coming in non- pro style ways
-‘Tweener skill set and size for next level
-Doesn’t seem to track the ball well down the field

-Earned Associated Press All-American honors as an all-purpose threat.
-First-team All-Big Ten pick
-Rushed for 771 yards and eight touchdowns (97 carries, 8.0 yards per carry) and caught 74 passes for 865 yards and seven scores
-Led the conference with 128.8 all-purpose yards a game and led Ohio State with 15 total touchdowns on the year.
-Ran a 4.31 40-yard dash at the NFL Scouting Combine in Indianapolis
– Born and raised in Brooklyn, which is not known to produce NFL products, let alone Division I players in football

A dynamic homerun threat with the ball in his hands, Ohio State’s Curtis Samuel is generating a ton of buzz leading up to the 2017 NFL Draft later this month.

However, the question of what he truly is at the next level is still up in the air with the 5’11”, 195-pound product out of Brooklyn.

While at Ohio State, Samuel lined up at running back and slot receiver on offense for the Buckeyes, later adding punt return duties to his workload. The idea of him getting touches in both phases of the game on offense and special teams was too enticing for Urban Meyer and his staff not to deploy Samuel in all situations.

But with that said, that might have hurt Samuel’s development for the next level because he doesn’t have a true position.

Listed most places as a running back or a wide receiver heading into the draft, we’ll just stick with ATHLETE here, because that’s what he brings to the table as a do-everything threat with the ball in his hands.

Motioning out of the backfield to line up in the slot, Samuel draws a one-on-one matchup with a Bowling Green safety in coverage, which is exactly what the Buckeyes want.

From there, Samuel is able to shake the safety in coverage with some great footwork before exploding inside on the route, allowing him to race home for the score, which was one of his 18 explosive plays of the year for Ohio State.

As a running back, Samuel has the ability to run flush to the line of scrimmage before knifing through gaps, hitting open field at top speed before then showcasing his shiftiness in the open field.

Against Oklahoma, Samuel repeatedly gashed the Sooners’ defense on stretch runs like this, running laterally to space out the defense before putting his foot in the ground and exploding north for big runs.

Later on in the season in a rivalry matchup against the Michigan Wolverines, Samuel shows his ability to stop and start quickly, cutting left right at the line of scrimmage to run laterally before exploding up the field after turning the edge.

In the College Football Playoff against Clemson, Samuel had some big-time plays, but there were also times where he really struggled to track the football, and on this late interception he showed just how raw and unnatural of a pass catcher he is at this point in his career.

Although this is a slightly high throw from JT Barrett, this is a play that Samuel is supposed to make.

He does time the jump a bit too early, but the ball hits his hands in a catchable position, so it’s not asking too much for him to come down with it.

Overall, Samuel really is a ‘tweener at the next level, but I do think he’d be best served making the switch to slot receiver full time, where he can use his great footwork and explosive lower body to thrive in the NFL.

On top of that, he can return kicks and punts, so that adds value to his game.

He has a similar build to former NFL receiver and returner Willie Reid, but in today’s game he should be much more of a factor as a receiver than Reid was.