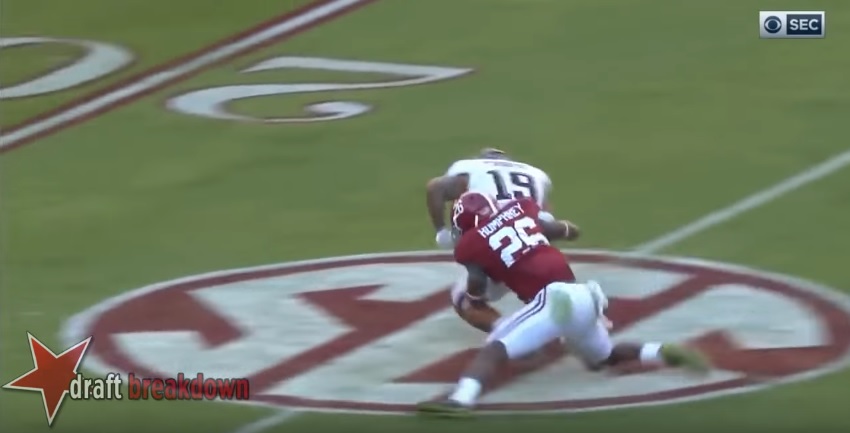 – Slighter frame and could add some muscle
– Catches in press coverage too often, hands too far outside, and lack of upper body strength can get him beat up when trying to jam
– Smaller size can make it tough for him to finish his tackles, must use leverage better and aim lower
– Aggressive nature can get him into trouble, vulnerable to double-moves and trying to do too much outside of his scheme/job
– Played left corner only
– Average production

Let me get this off my chest. I really like Marlon Humphrey. He has his flaws, we’ll explain how those can be corrected and why they exist, but I feel like he’s the one first rounder not enough people are talking about. And frankly, we haven’t either on this site. So let’s jump in.

Humphrey has the size, speed, and mentality you look for in a corner. Over six foot, ran a 4.41 at the Combine, and he’s a physical, willing tackler. He spent most of his time playing press man in college and did it well. Really like his feet, agility, and ability to punch and then open his hips in man coverage. Shows it all here. Jam the receiver at the bottom, open up his hips as the receiver releases, stays in-phase, and breaks the ball up.

For being such a young guy, he’s got a good IQ. It’s not just him being aggressive either. This was my favorite play of his and something he’d be asked to do on a regular basis in Pittsburgh’s Cover 2. Flat responsibility, read the QB, sink to take away the corner route of the smash concept, and pick the ball off. Beautiful.

Cover 2 weakness is the seven route and he defended it as well as you can draw it up.

While he isn’t the most physical corner you’ll ever see, it’s pretty good and more than acceptable for the position. Comes downhill aggressively and looks to finish. This is the type of play you’ll see from him. Downhill with power that loses steam as he uncoils his hips and he has to wrap up to take him down. Good, not great, but I’m ok with it overall.

On the negative side, he is pretty aggressive. Chalk it up to his youth. He pulled a Ryan Shazier and came downhill on a scrambling QB against Ole Miss in 2015, giving up a crucial touchdown late in the game, and here, is burned on this sluggo against Washington.

For his faults, it’s important to remember he was playing at college football’s powerhouse against similar levels of competition at 19 and 20 years old. He earned Nick Saban’s trust to start as a redshirt freshmen, which says a lot. The Crimson’s Tide defense is one of the more complex one, leaning on pattern matching like Saban’s Rip/Liz Match.

Like Bama alumni Kareem Jackson, it may take Humphrey a little bit of time to round out his edges, but there is so much upside to like. At 21, his first contract will be up before he’s turned 26, meaning you could literally get ten years of him at his prime before age becomes a factor.

Games Watched: vs Ole Miss (2015), at Tennessee, vs Texas A&M, vs Washington, vs Clemson