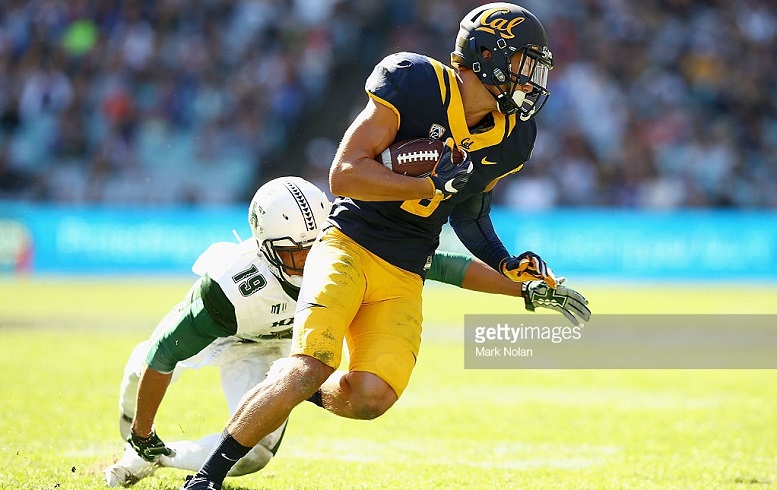 – Ran a limited route tree. (This was more a product of Cal’s offense and not necessarily a limitation of Hansen’s skill level; however, he still lacks experience in running more sophisticated route concepts). The vast majority of his routes consisted of either deep verticals, slants, or WR screens. Also, 100% of his routes were run on the right-side of the field only.
– Average quickness/acceleration out of his cuts and did not consistently create a ton of separation out of his breaks; (slant routes are an exception in this area, as he was regularly able to get open by using sharp cuts)
– Average top-end speed
– Lacks elite shiftiness/elusiveness after the catch. Hansen can be dangerous in the open field if he has room to run; however, he is not the type of player who can create his own space with special jukes or cuts.

Although there is no individual aspect of Chad Hansen’s game that is particularly amazing, he nevertheless possesses a versatile skill set that makes him a dynamic playmaker overall. In addition to being a big, physical kid who can out-muscle defenders, he is also a nuanced route runner that can use subtle movements to get open on underneath routes. While there are certainly aspects of his game that need refinement, on the whole, he is a capable player that will add value to whichever team selects him in this year’s NFL Draft.

In this first clip against Texas, Hansen demonstrates his great catch radius, as well as his superb body control and sideline awareness. He routinely showed an ability to elevate over defenders and haul in difficult receptions from uncomfortable body positions. Plays like this make him a highly dangerous target in both the red zone and on 50/50 jump balls:

On this play against Arizona State, Hansen again showcases his catch radius and body control. It is also worth point out his patient release at the line of scrimmage and his ability to separate from the defender when sprinting downfield, (the DB recovers on this play because the ball is underthrown, but Hansen still makes a great adjustment mid-play to complete the reception). Great footwork along the sideline to finish the play as well:

Hansen is not a one-trick-pony who can only win on deep routes. Rather, he also showed a consistent ability to beat defenders on underneath routes and achieve big yardage after the catch, (particularly on slants). For example, here against Stanford, he is “thoughtfully non-rhythmic” in his footwork during his stem, which keeps the DB off-balanced, and he does a nice job of creating separation by snapping his route hard inside. Although he slightly drifts in his stem (rather than working straight-ahead upfield), this play is a good illustration of Hansen’s nuanced route-running. Moreover, Hansen also shows that he can outrun an entire defense, despite having only an average 40-time:

Wide receiver screens were a major part of Cal’s offense and Hansen was often the prime target on these plays. He showed a good ability to read blocks, break tackles, and find open grass. Although he was sometimes slow to accelerate and often needed a few yards to get moving, he was frequently very dangerous when he got a little bit of space to work. The two clips below are good examples of his ability to produce big plays in the screen game:

It’s difficult to show the negative aspects of Hansen’s game using isolated clips from any particular game, but it’s still worth briefly mentioning a few. First, there are a couple of ways that he could improve his route-running. For example, it often seemed that he was too willing to take the release path that the DB was giving him, instead of fighting to get his desired release. This was most obvious when Hansen would take an easy inside release when running deep vertical routes, rather than trying to get a more favorable outside release. Similarly, Hansen also tended to drift in his stem away from his DB, rather than challenging his defender by working straight upfield. Lastly, there were some relatively minor flaws such has rounding his breaks on out-routes or losing too much ground on the back end of hitches/curls when working back towards the QB, but these issues should be correctable with professional coaching and practice.

Overall, Chad Hansen is a quality prospect who has a diverse skill set that should help him succeed in the NFL. His catch radius and body control make him a dangerous red zone target, and his ability to win on underneath routes will help keep pro-DBs honest in their coverage. He needs more fine-tuning in route running and blocking technique, but in general, he has the raw tools and natural instincts to be a productive player at the next level.

Games Watched: vs Texas, vs Stanford, at San Diego State, at Arizona State, vs Hawaii