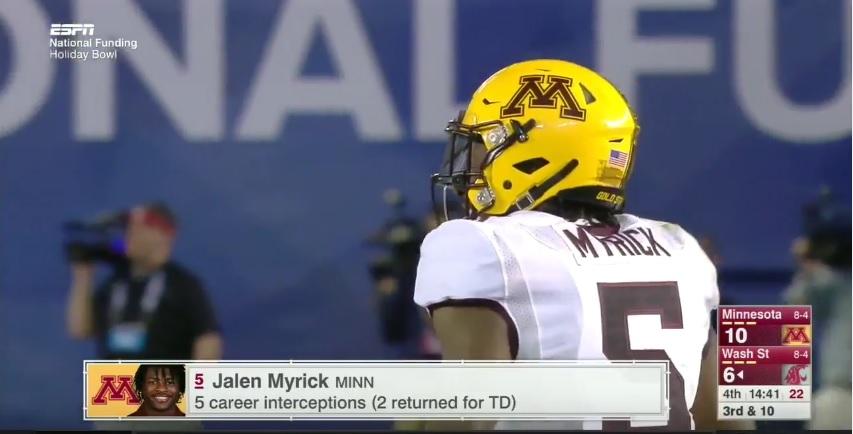 – Short but not small, squatty build
– Great long, straight-line speed who can stay in-phase downfield against virtually any receiver
– Good transition out of his pedal, nice click and close
– Carries his hands high at the LOS in press man
– Experience in man and zone coverage
– Willing and good tackler overall, plays with good technique and embraces the run
– Experience as left and right corner, field and boundary
– Vocal, high energy player, has swagger and like the mentality he plays with
– KR/PR experience, straight-line player who can make first man miss, tougher to bring down than you’d expect

– Obviously short and while has decent length relative to size, not great overall and has small hands (31 3/4 arms, 8 3/4 hands)
– Struggles on vertical throws to locate the ball and has trouble finishing at the top of the route
– Lack of height/length creates tons of problems at catch points, vertically and breaking routes, and struggles to play the pocket
– Seems stiff in off man and could be gambling/biting on WR release, allowing too much space and forcing him to recover
– Lacks production
– Average to below average starting experience

We’re obviously writing this report after the Steelers brought him in for a pre-draft visit. Otherwise, we honestly probably wouldn’t have spent much time thinking about him. The most notable thing you probably know about Myrick is his 40 time, turning in a blistering 4.28 40.

That long speed certainly matches up on tape and he can stay in-phase with fast receivers downfield.

He’s a fairly physical player who is certainly a willing tackler and decent at it. Don’t have any issues with him there and the return background is attractive, though in Pittsburgh, it probably wouldn’t really matter.

But Myrick’s lack of height and length gives him a lot of trouble. He’s aggressive but really struggles to finish plays. Trouble finding the ball downfield and can get boxed out on breaking routes. Hard an awfully difficult time. Here’s an example of the latter

You’d think he’d be a super fluid player but he showed stiffness in off coverage. Maybe he’s just guessing on the receiver’s stem but he gives up too much separation as the receiver breaks. He’s at the bottom of the screen here.

Sometimes small corners can play on the outside; Tavon Young last year and I suggested Damonate Kazee could do the same this year. But Myrick can’t because he’s going to get picked on vertically. That suggests moving him to the slot but there is more stiffness in his game than I expected. His agility numbers were some of the poorer of the group, TJ Watt beat him in the short shuttle and three cone.

All this is to say I’m not crazy about Myrick. He’s fast and wants to be physical but there’s too many holes in his game and an unclear fit for me to get onboard with him in honestly any round, though he’s going to get drafted. NFL Draft Scout seems to be really high on him, rating him a Day Two pick. I don’t agree. We’ll see how things play out.