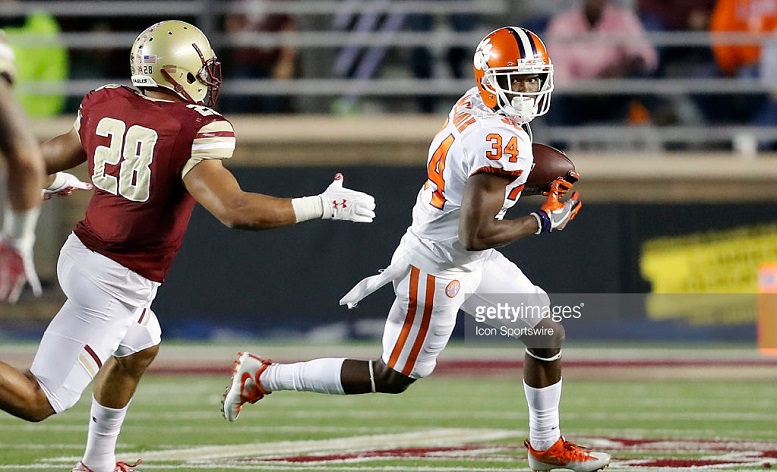 Coming from the same college that produced Carolina Panthers’ star linebacker Luke Keuchly, Boston College brings their noteworthy sequel linebacking prospect Matt Milano to the public eye this April. Like most sequels, Milano is a far cry from his predecessor but the linebacker still carries enough action and talent to receive a viewing.

If you are a fan of Michael Bay directed action movies that feature an abundance of explosions then you’ll fall in love with Boston College’s Milano. A big hitter, the manner in which Milano drives his targets into the ground are capable of setting off explosions.

Coming unblocked off the blind side, he shows his quick closing speed and heavy hitting ability as he pummels the Virginia Tech quarterback for a sack. With 31.5 career tackles for a loss and 14 sacks, Milano was one of college football’s most productive linebackers when it came to making plays behind the line of scrimmage.

Sticking with the theme of Milano’s film, you cannot help but notice the brute force used by the inside linebacker on the play above. Even more impressive than the hit is how Milano uses his smaller stature and speed to spring himself through a gap to make a play on the Duke running back.

Milano is also a safety turned linebacker and his former job experience shines through his tape. The Boston College safety is a true sideline to sideline player and can play out in space. Watch below as he runs down a play that had begun on the opposite side of the field.

Milano’s safety instincts allow the linebacker to read the play direction and respond quickly. If it were not for Milano’s efforts on the play above, Clemson running back Wayne Gallman could easily have ended up in the end zone.

But just like many fast-paced action films, a few plot holes are present in Milano’s pre-draft screening. The linebacker struggles especially with his hand work hindering his ability to shed blockers. This is without a doubt an area of improvement for Milano in order to fulfill any hope he has to crack an NFL starting defense.

Milano offered minimal hand technique to shed blockers during his college career. With an already lack in size, he must put up a better fight against those bigger in size.

Lastly, the Boston College linebacker tends to struggle with wrapping up elusive runners. While delivering a hard hit to a less elusive target is not an issue for Milano, the linebacker does struggle with squaring up targets moving laterally.

Milano is in perfect position to make a tackle on the Virginia Tech running back who has cut back to Milano’s area of duty. But instead of Milano adding to his tackle totals, he watches as the running back escapes his grasp. This is an area seen constantly throughout his film as he struggles to square up ball carriers running towards him.

Overall, Milano brings a fast-paced style of play with numerous action packed hits. While appealing for some of the audience at home, he lacks a few important qualities that could block his journey to being an NFL starting caliber linebacker. While not a five-star talent, Milano will provide special teams ability which could give him the longevity needed to develop his skillset