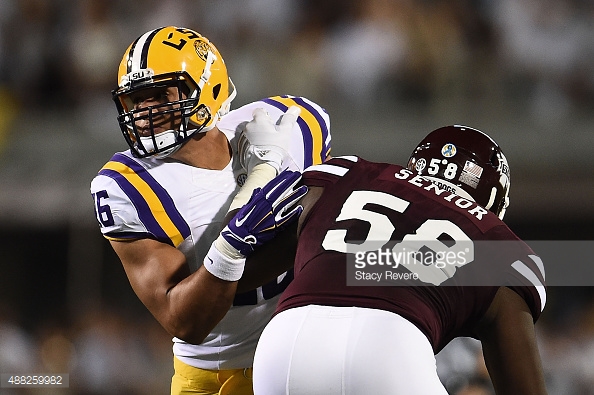 – Looks the part, good frame with long arms and big hands (33 3/8, 9 7/8)
– Uses hands well, works hard to stay clean in run and pass
– Functional strength, holds POA against the run with proper hand placement and pad level
– Fluid in space, lots of experience dropping into coverage and shows ability to change direction in space, looks effortless and comfortable
– Versatile, experience hand up and down, played off ball and moved to three tech on 3rd and long in 2016
– Capable of stringing together multiple moves in his pass rush, high energy player
– Good effort and motor, chase to the ball
– Uses length to advantage and creates space in both phases

– Average athlete who tested poorly in basically every area
– Lacks go-to move as a pass rusher and doesn’t have many counters, when he is able to win the edge it’s mostly coming against RBs/TEs
– Could change positions due to being an average pass rusher
– Limited production in school and sacks he racked up didn’t look as good on tape as they did on paper
– Upside likely capped fairly low
– Lots of play time but had trouble cracking starting lineup, rotational piece

Bower is one of your typical high-profile high school recruits who never quite lived up to the billing. But that doesn’t automatically make him a horrible prospect, even if the lack of production likely puts a strong cap on how good he’ll be. Players with that little production in college don’t often suddenly start producing at football’s highest level.

But I can’t help but like the kid. As a senior, he moved to a true EDGE position, playing with his hand down in 2015. LSU asked him to drop into coverage a ton and he seemed to be comfortable with it right away. Spot drops mostly but he’s a fluid player who can change directions. He’s the LOLB in this clip, ignore the area – that ain’t him.

His hand usage is pretty advanced for a prospect and he does well to work off blocks as a pass rusher and in the run game. We’ll focus on the latter here, using his length to his advantage, to shed the block and finish the play. RDE here taking on the fullback.

It’s sorta difficult to show but he doesn’t have a go-to move. First step is just average, his bend is decent but only shows up against tight ends and running backs and he tested average to below average. 4.82 40, 1.66 ten split, 31.5 vert, 7.20 three cone. He had trouble cracking the starting line and when he did, wasn’t very productive. Those are all obvious red flags on a resume.

Even in his best game, the bowl win over Louisville this season where he had three sacks, it wasn’t that impressive. He was virtually unblocked twice for two of his sacks against an overmatched Cardinal offensive line.

In this class, he is a poor man’s version of Jordan Willis. And he sorta reminds me of Barkevious Mingo, who tested much, much better but that did nothing to translate into a highly successful career. Someone like Bower won’t offer a lot against the passer but can play well against the run and be an asset in coverage.

The Steelers have shown interest in Bower at the Combine and he’s a possible double-dip candidate late on Day Three.

Games Watched: vs Alabama (2015), at Wisconsin, at Texas A&M, vs Louisville