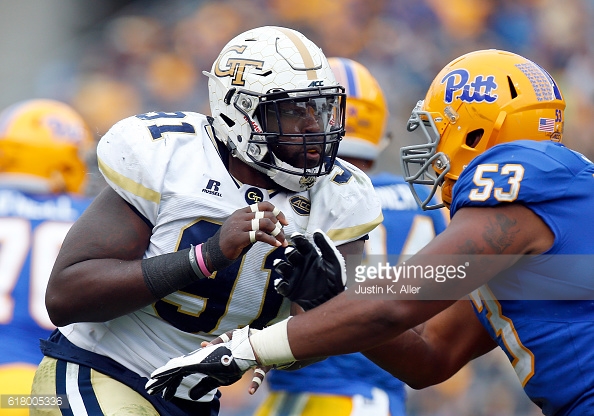 -Quick, efficient swim move as an interior pass rusher
-Uses hands well and shoots them quickly into opponent at the snap
-Good get-off at the snap, allowing him to penetrate gaps quickly
-Creates some push on bull rushes against interior OL
-Intriguing height and length for position

-Struggles to anchor against the run, doesn’t have enough lower body power to hold up
-Plays with a really high pad level on a consistent basis, allowing blockers to get under his pads
-Very slow to disengage blocks and find the football
-Lacks lower body athleticism and appears very stiff from the waist down
-Very limited production throughout college career

-Played in 45 career games for Georgia Tech (27 career starts)
-Recorded 123 total tackles (74 solo), 15 tackles for loss, 10.5 sacks, four forced fumbles and one blocked kick over four years with Yellow Jackets
-Named 2016 All-ACC Honorable Mention by media and coaches
-Finished senior season with 10.5 tackles for loss and 7.5 sacks
-Recently worked out for Steelers as one of 30 pre-draft visits for franchise

When Patrick Gamble’s name came across the wire recently as one of the pre-draft visitors to the Pittsburgh Steelers, I’ll be honest:  I had no idea who this guy was as I had never heard of him, or many Georgia Tech players in recent memory.

Diving into the tape, I came away feeling very “meh” about Gamble as a player. While he does have intriguing height and length for a defensive lineman that played mostly along the interior of the line, there’s just not much to get excited about with his game.

Standing 6-feet-5, Gamble towered over guards and centers in the Atlantic Coast Conference, but his height played directly into him struggling mightily against the run.

He has a hard time keeping his pad level low, which allowed offensive linemen to get into the center of his mass and push him around quite often, moving him where they wanted him to go, opening up rushing lanes. He’s the nose tackle, #91.

Against the eventual-National Champion Clemson Tigers, Gamble stands up at the snap and gets walked off the line with ease. While it may look like a double team, the Clemson right guard is the one fully engaged, driving Gamble well off the ball at the snap.

He’s too high and doesn’t have the leg power to hold up in this situation, so he has to work on his pad level at the snap once he gets to the NFL. The LDT below.

When he keeps his pad level at the correct height, he’s able to ward off blockers to make plays.

On this zone run here by Miami, Gamble locks up with the Hurricanes’ guard and does a great job of creating separation via extension before then disengaging to make the stop in the hole.

It’s plays like this that has me intrigued, but they’re too few and far between.

As a pass rusher though, Gamble has an impressive swim move. The RDT in this clip against the left guard.

Taking on interior offensive linemen, Gamble’s height can come into play when he’s looking to rush the passer.

Right at the snap Gamble does a good job of slapping away the guard’s hands, allowing him to get into his swim move quickly. While he doesn’t get to Miami’s Brad Kaaya on the play, the display of speed and efficiency on the move is impressive.

Overall, Gamble has a lot of work to do as a defender despite playing heavy snaps the last four years with the Yellow Jackets.

His senior year is certainly something to build off of, considering he finished with 7.5 sacks and All-ACC honorable mention honors, but he’s a long-term project that likely doesn’t wind up being anything more than a serviceable backup rotational defensive lineman.