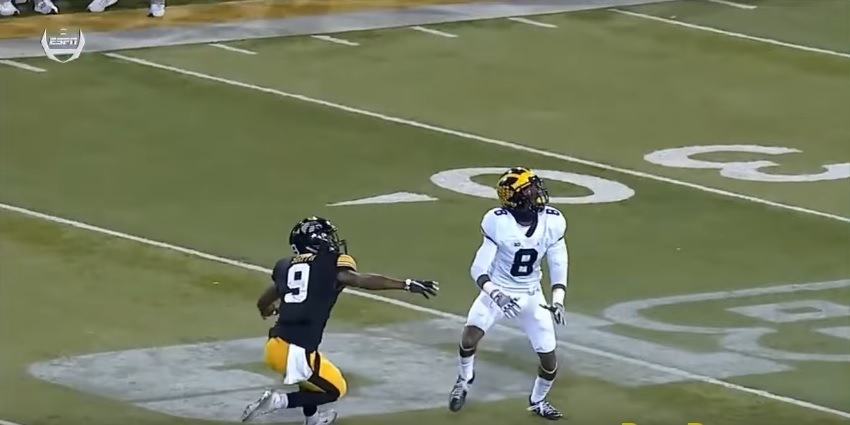 -Slow to get off blocks on the boundary against the run
-Struggles to digest what’s happening in front of him
-Doesn’t seem to have a feel for what receiver is trying to do against him
-Tends to get grabby when beat, leading to flags

-Four-year letterman for the Wolverines
-Played in 47 career games (18 starts) at cornerback for the maize and blue
-Finished with 68 career tackles, four tackles for loss, one sack, six interceptions and 22 pass breakups in four years at Michigan
-All-Big Ten second team, as voted on by coaches and media
-Finished career with fourth-highest single-season total for pass breakups (17) in school’s history
-Raised in a military family with both mother and father serving in the Army

Michigan’s Jourdan Lewis certainly stole a majority of the headlines this past season for a stout pass defense of the Wolverines, but fellow cornerback Channing Stribling certainly played a large role in the maize and blue having a tough secondary to pass against, thanks to his length and sticky hands when the ball was in the air.

Although not overly physical and lacking ideal long speed for the cornerback position, Stribling more than held his own on the opposite side of Lewis, withstanding a barrage of passes his way all season long as teams tried to stay away from Lewis as much as possible.

Not overly physical or a quick-twitch type of guy, Stribling is more of your steady presence, meaning you know exactly what you’re going to get from him on a weekly basis.

Expect a few penalties a game for holding or pass interference, but also expect him to get his hands on the ball quite a few times as well, whether that’s via interceptions or pass breakups down the field.

You can see at the snap here against Wisconsin that Stribling simply doesn’t have the long speed to keep up with receivers down the field, but what the senior does have is great length, allowing him to recover on balls to get a hand in on the play to break up a potential big play.

Granted, the Michigan safety likely would have broken this play up with the big hit regardless, but it’s nonetheless impressive that Stribling is able to get a hand on the ball in full extension to break up the deep shot.

Later in the season he pulled off a similar feat against the Ohio State Buckeyes on the road.

On another deep shot where he’s beat off the line, Stribling is able to stay within striking distance of Noah Brown before ultimately getting a hand up to swat the ball away at the last second.

What I like so much about this play is Stribling’s ability to get a hand on the ball while in full stride. You don’t really see it that often at the next level unless a guy has a really impressive wingspan, like Richard Sherman.

I’m not saying that’s who Stribling reminds me of — not even close — but he has impressive length that allows him to never be out of a play completely as long as he’s within the vicinity of the catch point.

The one area I noticed that Stribling is very comfortable operating in is the trail technique at corner, where he’s able to follow the receiver, matching patterns before making a play on the football.

By trailing the Wisconsin receiver off the line, Stribling is able to pattern match the entire time, reading what the receiver is trying to do, which in turn, allows Stribling to get his head around and find the football while sitting underneath the route for the easy interception.

That being said though, I’m not sure how comfortable I’d be playing Stribling in a trail technique at the next level, simply because of his lack of speed and explosiveness.

While he was solid in college, I’m just not sure of what he can become at the next level because he doesn’t have that one standout trait to work with.

As of now, I see Stribling as a depth piece that can fill in for an injured teammate, but not a guy who can be counted on as a starter long term.

He’ll have to make a mark on special teams to keep a job in the NFL.