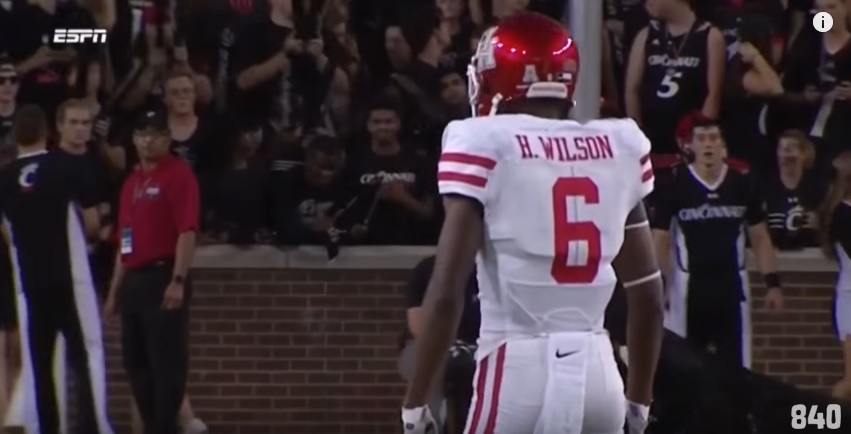 -Good ball skills for cornerback
-Ideal height and length for position
-Quick, efficient burst to break on the ball
-Impressive lower body explosion for position
-Fluid hips and quick feet to plan man all over the field
-Physical run defender willing to stick his nose in there

Much like current Cincinnati Bengals cornerback William Jackson III did, Houston’s Howard Wilson burst onto the senior in 2016, making a name for himself as a potential shutdown cornerback moving on to the NFL.

Possessing the ideal height and length for today’s game, Wilson has an impressive blend of lower body explosion and surprising ball skills to add to his ever-improving game.

In two and a half seasons at Houston, Wilson found himself getting his hands on the ball, quite a few times. A large portion of him being able to do that was his outstanding lower body explosion, allowing him to close on throws quicker than most cornerbacks in college can do.

With Tulsa in a stack formation out wide, Wilson is able to creep up to the line in anticipation of a quick throw. But he shows patience to allow it to develop, baiting the quarterback into the throw before exploding forward for the interception.

I love the way he sits and watches what’s happening in front of him, baiting the quarterback into the quick throw. But Wilson has so much explosion and closing speed that he’s able to jump the route on a simple through.

Although he doesn’t come up with the interception on this play, it is still impressive to me because of his closing speed to the football.

Outside of being a quick-twitch athlete on the boundary, Wilson has shown the ability to be a physical defender, showing his willingness to come downhill to defend the run with the want-to.

I know that he goes low here, but he’s willing to come downhill to chip in against the run, and he’s not afraid to stick his nose into the pile to make a stop.

Too often I see college corners unwilling to do this, but not with Wilson. He’s got a mean streak to him as a defender, and I like that from my boundary corners.

That being said though, he has poor technique as a tackler and leaves himself vulnerable to big misses in the open field.

As one of the last lines of defense on this play, that’s a stop Wilson has to make. Yet you can see him ducking his head as he closes in, going or the ankle tackle.

He simply whiffs, allowing Donnel Pomphrey to pick up a big gain on the play.

The one area that Wilson must certainly take a step forward in is his play strength. He’s a bit thin in terms of his muscular build, but being in an NFL workout program should allow him to pack on some pounds in the right areas without losing some explosion.

Other than that, I see a guy who isn’t a burner at the position, so he could struggle with speed guys, but he should be able to excel in a zone scheme where he can sit and read of the eyes of quarterbacks, allowing him to break on throws and create turnovers.

I do think that Wilson is going to be a day three cornerback that surprises a ton of people in the NFL.