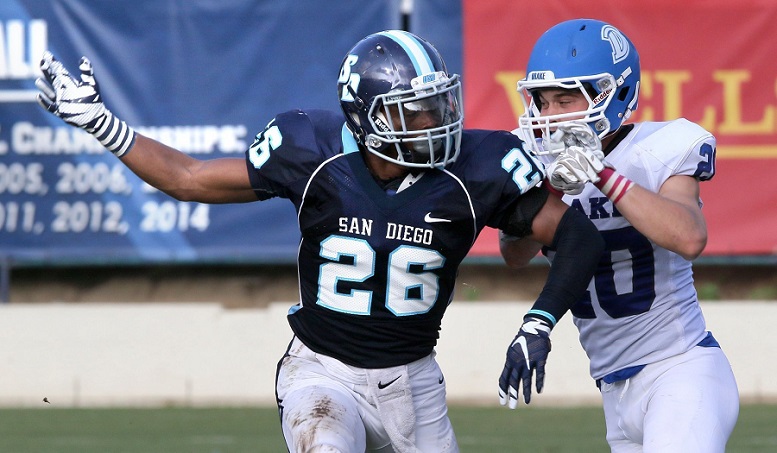 – Great speed/acceleration: ran a 4.32s and 4.35s 40-yard dash at USD’s pro-day; able to plant his foot in the ground and close on underneath routes; fast enough to recover on deep routes
– Excellent play recognition and ability to bait QBs into ill-advised throws
– Very competitive and fights through contact
– Fantastic ball skills: 11 career INTs and 48 pass break-ups
– Dynamic kick and punt return ability
– Aggressive against the run and capable of making tackles behind the line of scrimmage
– High character and solid work ethic

– Played against inferior FCS competition
– Faced fairly simplistic route concepts that were run by average receivers
– Will have to adjust to the speed and physicality of the NFL game
– Played predominantly off the line of scrimmage; may encounter a learning curve in his press-man assignments

As is the case with any player coming from the FCS, Jamal Agnew will face many challenges associated with adapting to the NFL game. He will battle receivers that are faster and far more athletic than those he covered in the Pioneer League; he will be tasked with learning a bigger, more sophisticated playbook; and he will have a significantly smaller margin of error to perform all his responsibilities. However, despite these obvious obstacles, Agnew clearly possesses the requisite physical tools and natural football instincts to succeed at the professional level.

The first thing that stands out about Agnew’s game is his fantastic play recognition and ability to anticipate route concepts. On both run and pass plays, he demonstrated the capacity to quickly process and react to a variety of offensive schemes, while also maintaining discipline in his assignment. For example, in this play against Butler, he easily identifies the tight end’s out-route well before the TE initiates his break to the outside. Moreover, rather than simply jumping the route as soon as he diagnoses it, Agnew deliberately waits, trusts his athleticism, and baits the quarterback into an ill-advised pass. Lastly, he showcases his great ball skills by finishing the play with a diving interception:]

This interception against San Diego State is another illustration of Agnew’s excellent play/route recognition. Again, notice that he identifies the receiver’s hitch route so quickly that he has to hold himself back in order to bait the QB into a poor decision. He also does a nice job of planting his foot in the ground and driving hard through contact to snag the INT:

As previously mentioned, Agnew will obviously be tasked with covering receivers who are much faster than those he faced in college. Despite this fact, he showed both on film and at his pro-day (40 time: 4.32s and 4.35s) that he has the necessary quickness to compete at the next level. This play against Campbell University highlights his recovery speed, as well as his ability to out-run receivers and track the ball in the air:

In addition to being a ball-hawk when dropping in coverage, Agnew showed a willingness to be an aggressive player in the run game. His great recognition skills and his overall athleticism allowed him to come downhill hard, avoid blockers, and make forceful tackles in the backfield. These next two clips highlight this skill:

It’s worth pointing out that this next clip was from a game that was played in terrible, muddy conditions (notice the numerous players who are slipping and sliding), yet Agnew was still clearly the quickest, most balanced individual on the field. He plays very fast, but under control, which is another positive indication that he can make it in the NFL:

Lastly, Agnew was a significant threat in the return game and routinely flipped field position in his team’s favor. He showed that he could take advantage of coverage collapses on the outside, as well as an ability to accelerate through small gaps in the middle of the field. On this punt return in particular, Agnew also demonstrates his decisive decision making and great change of direction skills:

Overall, although Jamal Agnew is likely to experience some growing pains as he makes the substantial jump to the NFL, he nevertheless showed that he is an extremely talented and dynamic playmaker who certainly has the potential to make a pro roster. On a personal note, Jamal is a friend and former teammate of mine and I can personally attest to his incredible work ethic, competitiveness, and athleticism. He is a high character guy who comes from a great family, and I have no doubt that he will make the most of all the opportunities that he encounters. Additionally, he has completed pre-Draft visits with the Tennessee Titans, New York Jets, and the Los Angeles Chargers.