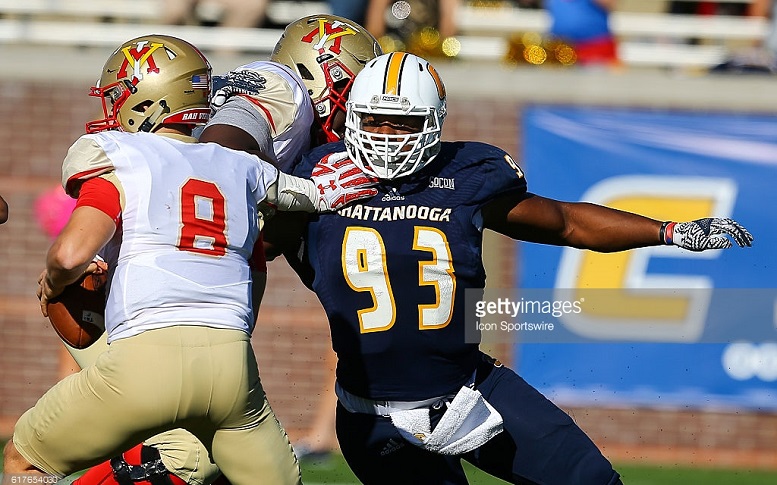 Another small school prospect who has been making some noise is Chattanooga defensive end Keionta Davis. At 6’3 and 271 pounds, Davis certainly has the appropriate size for a 4-3 end or 3-4 outside linebacker. Having a great frame is just a small part of the equation as Davis will have to substitute in multiple areas of his game to provide a clear answer of his talent level.

Gifted with incredibly long arms (34”), Davis is able to use his greatest weapon to extend and separate from blockers. In allegiance with his strong upper body strength, Davis can pack a punch on his way to the quarterback.

While Davis’ production could be the result of playing against lesser competition, his case is only boosted by turning in quality performances against higher ranked teams such as Alabama. Watch on the play below as Davis is able to replicate his impressive hand work against a more talented Alabama offensive line.

Undoubtedly the most important piece of the edge equation is determining how well the individual can rush the passer. Solving Davis’ edge rushing abilities is a far more complex task than it appears. With 31 career sacks, Davis’ numbers back up his ability to rush the passer but his athleticism and tape offer some compelling arguments.

Davis does have some ability to turn the edge to get to quarterback as judging by the play above but may face some underlying difficulties at the next level. Davis’ path to the quarterback took just about four seconds on the sack above, a time luxury that Davis will not have the benefit of in the NFL. If Davis can trim some of the stiffness off his game, it could work wonders for his skillset.

A major concern for Davis is that the lineman’s production drops as the competition level increases. While Davis may have been the big fish in a small pond for majority of his college career, he did tend to struggle against more formidable opponents.

Here Davis is one on one with top tackle prospect Cam Robinson. A moment that smaller school prospects dream for – the opportunity to outmatch a top tier tackle. As you might expect, Robinson overmatches Davis, widening the defensive lineman out of his gap. As Davis recovers from the block, a noticeable hitch in his step is also seen. Davis’ talent may just be a step too slow to be a major contributor at the next level.

The most reasonable comparison for Davis is former LSU defensive end Sam Montgomery. Though Davis will likely not be selected in the third round like Montgomery, both ends were 6’3, 270 pounds with a long frame. Both ends had some edge ability but struggled with escaping their robotic lower body.

As for the Steelers, if the team has any interest in selecting Davis it will be a late round project pick with the intention of transitioning him from a 4-3 end to a outside linebacker.