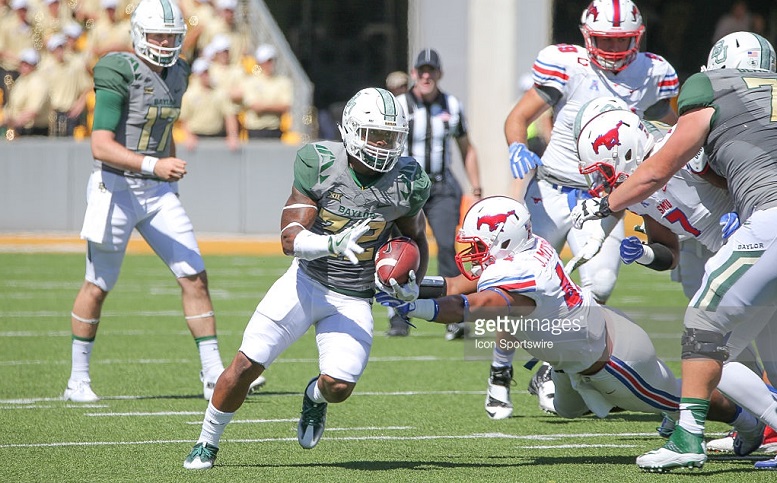 Linwood possesses great lateral agility that is capable of making any defender miss. With a hard-high cut move, Linwood leaves defenders confused as they wonder where the Baylor running back has gone. But by this time, Linwood has already made it halfway up the field.

For undersized running backs who do not have the size advantage to break tackles, they must have an ability to create hidden yardage somehow. Linwood is one of the best at this, as his speed and agility can turn a 3-yard gain into a potential 30-yard.

While the play above showcased the running back’s agility, this is not the only weapon in his arsenal. Part of the reason why Linwood became Baylor’s all-time leading rusher is because of his easy transition into second gear. Linwood can explode through a running lane and easily take second levels by surprise with his speed.

As Linwood follows his pulling guard off tackle, he accelerates into the secondary too quickly for the Iowa State defenders to get even a hand on him. The second level should perhaps be re-named ‘No Man’s Land’ as it is a highly dangerous area of the field once Linwood steps into it. Linwood’s open field ability and his skillset make him an almost impossible player to square up and bring down at the second level.

Earlier I spoke about Linwood’s ability to turn a 3-yard gain into a 30-yard gain, foreshadowing what was approaching. Watch on the play below as Linwood, almost magically, escapes a group of defenders and turns in a big gain.

Linwood’s composure shines through on the play above, The Baylor running back does not panic with defenders approaching him, instead remaining calm and running towards the opposite sideline. While many running backs would be unable to replicate a play like this, Linwood knows that almost no defender can match his speed to the perimeter.

A pattern now starts to form on all of Linwood’s plays posted above – they are all runs to the perimeter. Playing in Baylor’s spread offense, Linwood did not take any pro style handoffs and as you may expect, he does tend to struggle when running up an interior running lane.

In the play above, Linwood is stopped for a short gain. While it just seems like an average every down running play, Linwood did miss the opportunity to do something more on the play above. Perhaps unable to see in game speed, here is a still image that better exhibits Linwood’s missed opportunity. 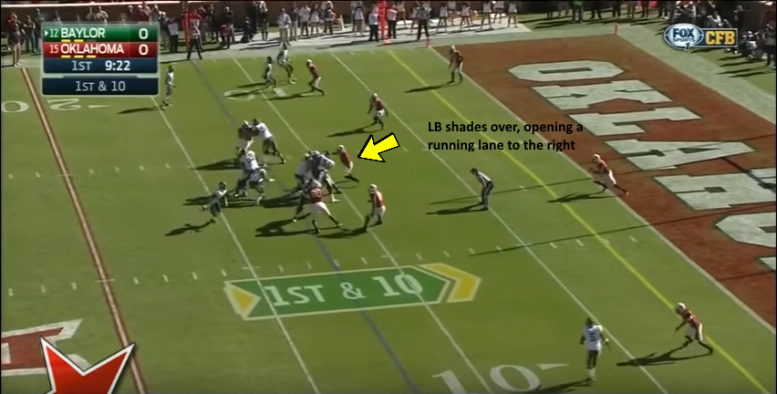 As Linwood approaches the line, the Oklahoma inside linebacker shades over to Linwood’s left, leaving an open running lane open on the right side. Linwood chooses to stay left and plays right into the linebacker’s hand, being stopped for a short gain.  You often hear Pittsburgh Steelers’ running back Le’Veon Bell speak of how he reads the inside linebacker’s feet after the snap to determine which hole to pursue. And while it would be unfair to criticize a college running back for not showing the same instincts as one of the NFL’s better backs, it is something that Linwood must improve on as he adjusts to the NFL’s style of running.

At the next level, Linwood will not enjoy the benefit of being the fastest player on the field but he does offer potential as a change of pace back. Linwood would be a great asset to substitute in when a team is facing an exhausted defense. A third down back duty for Linwood cannot be ruled out as well, as even though the running back only grabbed a few receptions during his career, it was not because of bad hands, rather Baylor’s scheme did not make him a primary receiving option.