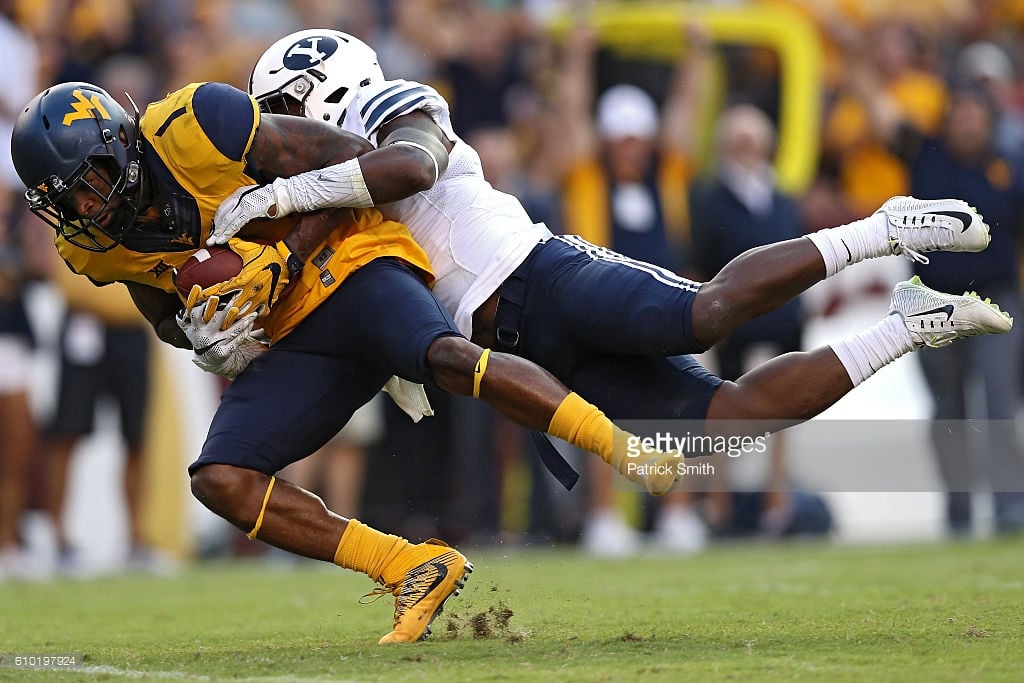 – Elite speed and a dynamic player downfield, routinely got behind defenses and looks to have speed to give even the fastest corners trouble, much faster than timed at the Combine
– Good release off the line, stems route well and able to drop his hips to change directions with fluidity, doesn’t lose any speed in his cuts
– Reaches top speed quickly, short-strider with great burst/acceleration
– Able to track the ball over his shoulder on vertical throws and able to maintain leverage and speed throughout
– Shows ability to high point the football, good leaper, and makes contested catches downfield
– Not a particularly powerful player but fights hard and doesn’t go down easily
– Productive, big-play career

– Unrefined player who needs to be more detail-oriented in pretty much every area
– Releases are far too different in run and pass, quick off the ball against the pass and slow versus the run
– Limited route tree, mostly screens and vertical shots
– Has to work harder after his route finishes, too often just stops, doesn’t get open on scramble drills, doesn’t look to find grass, and needs to come back to the football harder on underneath routes
– Effort as a blocker seems inconsistent, either personal issue or scheme but either way, will have to be every down intensity guy in the NFL
– Mostly lined up as an X receiver, got the benefit of playing in space

Look at Gibson’s 40 yard dash at the Combine and you’ll be wholly unimpressed – a 4.5 flat. Look at his Pro Day and you’ll perk up, a 4.42 according to NFL Draft Scout. Watch him on tape and you’ll see one of the most dynamic players in college football, a serious playmaker who is fun to watch.

He made his money basically one way in college – vertically. Won vertically one basically every game I watched. The first game I saw was against Youngstown State, where he dominated, but I figured that could be because of the competition. But he burned corners just the same against more even talent, including this incredible grab against Kansas State. Shows speed, tracking the football, and hauls in this throw despite his helmet getting ripped off.

And watch him rip off this 70 yard TD against Baylor. Just blows by everyone.

Ok, you get it. Dude is fast. But that’s about his best weapon and the rest of his game is weak. His route tree didn’t consist of much and he wasn’t detailed oriented. Loafed coming out of his stance as a blocker, tipping the play as a run, didn’t always work back to the ball, and wasn’t active in scramble drills.

In the NFL, if you don’t work back to the ball, you’re going to piss of your QB. Because he’s going to throw a ton of picks and get the blame for it on Monday. Almost happened here.

Speed is common for a receiver but Gibson isn’t coming in at Will Fuller type value. He’s a mid-round pick and what he does, he does really, really well. There’s a ways to go but you can see why the Steelers are interested, an X receiver to back up Antonio Brown.

Games Watched: vs Missouri, vs Youngstown State, at Baylor, vs Kansas State